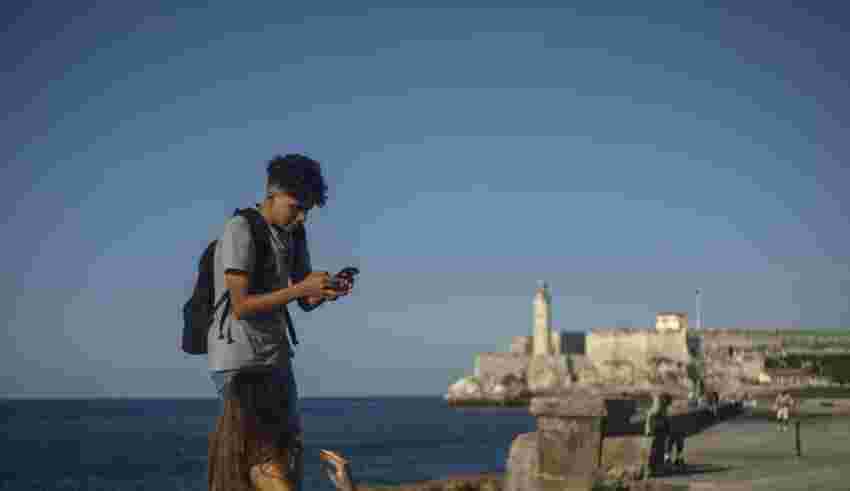 HAVANA (AP) — In the Telegram group chat, the messages roll in like waves.

Others offer medicine brought from outside of Cuba, adding, “Write to me in a direct message.” Emoji-speckled lists offer antibiotics, pregnancy tests, vitamins, rash creams and more.

The group message, which includes 170,000 people, is just one of many that have flourished in recent years in Cuba alongside an exponential increase in internet usage on the communist-governed island.

The informal sale of everything from eggs to car parts — the country’s so-called black market — is a time-honored practice in crisis-stricken Cuba, where access to the most basic items such as milk, chicken, medicine and cleaning products has always been limited. The market is technically illegal, but the extent of illegality, in official eyes, can vary by the sort of items sold and how they were obtained.

Before the internet, such exchanges took place “through your contacts, your neighbors, your local community,” said Ricardo Torres, a Cuban and economics fellow at American University in Washington. “But now, through the internet, you get to reach out to an entire province.”

With shortages and economic turmoil at the worst they’ve been in years, the online marketplace “has exploded,” Torres said.

Meanwhile, Cuba’s versions of Craigslist — sites such as Revolico, the island’s first digital buying-and-selling tool — advertise everything from electric bicycles brought in from other countries to “capitalist apartments” in Havana’s wealthy districts.

Many products are sold in pesos, but higher-priced items are often listed in dollars, with payments either handled in cash or through bank transfers outside the country.

While wealthier Cubans — or those with families sending money from abroad — can afford more lavish items, many basic items remain unaffordable for people like Leonardo, a state-employed engineer who asked that his real name not be used because he fears retribution from the government.

Three months ago, Leonardo began buying items such as inhalers, antibiotics and rash creams from friends arriving from other countries, then reselling them for a small profit online. Government authorities are harshly critical of such “revendedores,” or resellers, especially those who buy products in Cuban stores then sell them at a higher price.

In late October, President Miguel Diaz-Canel called for a crackdown on the practice, referring to the revendedores as “criminals, swindlers, riffraff, the lazy and the corrupt.”

“What we can’t allow is that those who don’t work, don’t contribute and break the law earn more and have more opportunities to live well than those who actually contribute,” he said during a meeting with government officials. “If we did that â¦ we’d be breaking the concepts of socialism.”

But Leonardo said he and others like him are just trying to get by.

“This medicine goes to the people who need it, people who have respiratory issues,” he said. “Those who use them are people who really need them. … More than anything else, we sell antibiotics.”

With the money he’s earned from his sales, Leonardo has been able to buy soap and food, as well as antibiotics and vitamins for his elderly parents.

The rise of the new digital marketplaces speaks to a specific brand of creative resilience that Cubans have developed during decades of economic turmoil. Much of the crisis is a result of the U.S. government’s six-decade trade embargo on the island, but critics say it’s also due to government mismanagement of the economy and reluctance to embrace the private sector.

So people on the island tend to be highly resourceful, working with whatever they have available to them — think old cars from the 1950s that still roll through the streets, thanks to mechanics using ingenuity and spare parts to address a shortage of new vehicles.

Entrepreneurs have used the same creativity to deal with what was initially very limited internet access. Carlos Javier Pena and Hiram Centelles, Cuban expatriates who live in Spain, created Revolico in 2007 to help “alleviate the hardships of life in Cuba.”

They kept the site design simple, similar to Craigslist, to match the island’s sluggish internet. But in 2008 — the same year the government lifted a ban on sales of personal computers — it blocked access to Revolico. The ban remained in place until 2016. In the meantime, Pena and Centelles used digital tools and different host sites to jump the firewall.

Using the site was still a challenge for many, however, given the lack of cellphone internet.

Heriberto, a university student in 2008, was able to access it through a small monthly internet package given to him by the school. Others asked friends and family to buy items for them while at work, where they sometimes had internet access.

“Here, the markets more often than not don’t have the things you’re looking for,” said Heriberto, now 33, who asked that only his first name be used because he also feared repercussions from the government. “So you develop this custom of looking first in the store. Then when they don’t have it, you look on Revolico.”

Sales on WhatsApp, Facebook, and Telegram really took off in 2018, when Cubans gained access to the internet on their phones, something American University fellow Torres described as a “game changer.”

Between 2000 and 2021 the number of Cubans using the internet rose from less than 1% of the population to 71%, International Telecommunications Union data shows. The internet was a lifeline for Heriberto and many other Cubans during the COVID-19 pandemic, they said.

Now, with the island’s main economic sector, tourism, still recovering, many have built entire enterprises on the online sale of goods — both basic necessities such as medicine, as well as many higher-priced specialty items. Heriberto recently used the site to sell a mountain bike he priced in dollars.

Revolico co-founder Centelles says the site and similar tools have evolved to adapt to a constantly changing Cuba. For example, as the island suffers crippling blackouts, sales of power generators and rechargeable batteries have skyrocketed, he said.

Government officials have said the internet is important for the country’s economic growth — but have treated it with a “grudging acceptance,” said Valerie Wirtschafter, a senior data analyst at the Brookings Institution who tracks internet usage in Cuba.

“They have never really been able to control the internet in many ways,” Wirtschafter said.

Perhaps the most visible example came when mass protests erupted in 2021, largely thanks to rapidly spreading communications on social media sites including Facebook, WhatsApp, Instagram and Telegram. The government blocked many key social media and messaging sites for a number of days to stop protests from spreading.

While Leonardo said he considers it risky to sell on Telegram, “in the end, you need medicine … so you assume that risk.”

Heriberto still uses Revolico, but he said he now prefers sites such as Facebook that offer a level of anonymity. On those sites, he can sell using a fake profile, he said, as opposed to Revolico, which requires you to post your phone number.