That’s a signature line from Snake, the hero of the iconic Metal Gear gaming series, but it’s also one that David Hayter, the character’s long-time voice actor, has been using for years. As Hayter enters the room for his August 28th panel at Toronto’s Fan Expo Canada, all it takes is for him to utter these four words before the audience cheers with palpable giddiness. 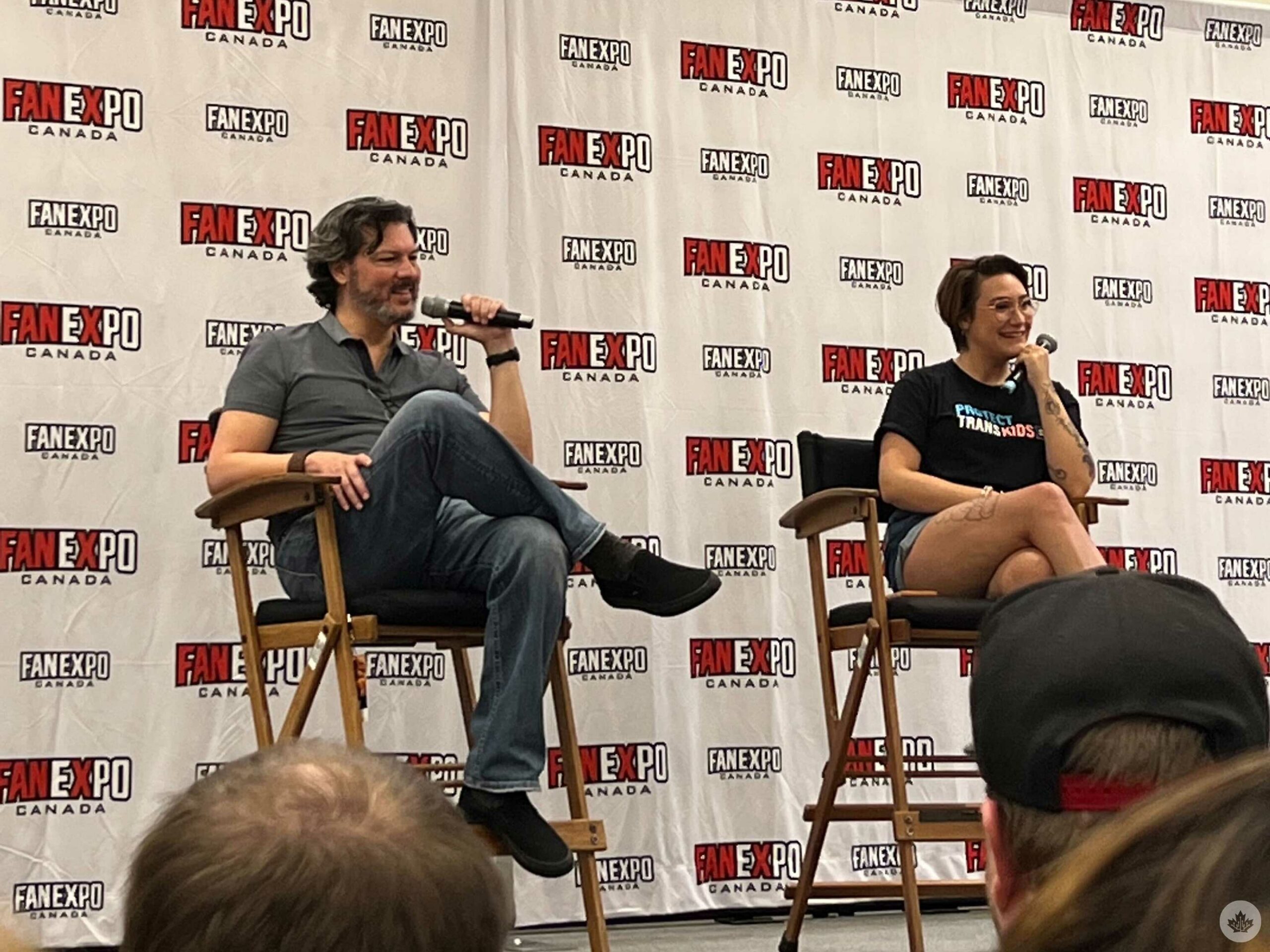 Clearly, the character means a lot to many people. And even after a decades-long career spanning voiceover, live-action performances, screenwriting, directing and producing, Snake still means a lot to Hayter, too.

“It’s very difficult to explain what Snake means to me,” the Toronto-raised multihyphenate admits to me at Fan Expo. “I’ve been doing this part since 1998, and what it really means to me is that I love the games, and I love the chance to have been in them. And it’s nice to get some recognition. But what it really means to me is the people that come up to me and say that they bonded with their dad over the game, or their brother or their uncle or whatever, or that it got them through hard times and that Snake was an inspiration to them in some way. And so that’s extremely valuable, too.”

Indeed, Hayter is able to find value in many aspects of the series, even if some fans aren’t able to. At one point during the panel, someone asks the rather bizarre question: “if the series were to end at some point before [Metal Gear Solid V], where would you have it end and why is it Metal Gear Solid 3?” 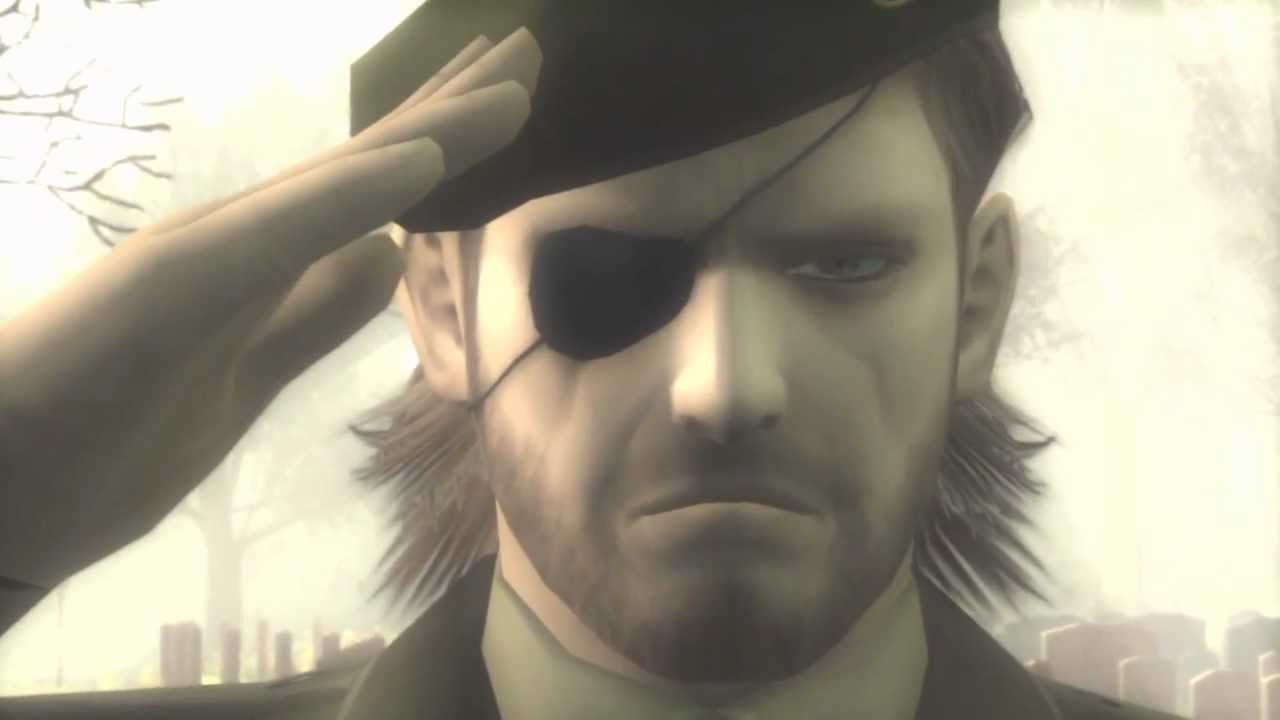 In response, Hayter mixes dry wit with insightful commentary to point out all of the stories that have come out — and could continue to come out — from the Hideo Kojima-created stealth game series.

“[The ending is] not Metal Gear Solid 3 because that’s the beginning of the story. It would be Metal Gear 4 where the progeny of Big Boss has accelerated aging, Meryl is off to marry Johnny Sasaki, the diarrhea kid, and Snake, in reward for his lifetime of service, is going to go to his ranch and die. So that was sort of the ending of the story for me,” Hayter says during the panel.

“But, at the same time, I don’t want it to end. People are always like “would you play Snake again?” and I’m like ‘Yeah! Why, are you offering?” I’d play him anytime. And I’ve talked with fans about doing the original NES games and there’s a lot of lore there that could be explored. But every Metal Gear game comes to a poignant end — Kojima’s really good at wiping you out like that. And the end of Snake Eater is pretty devastating. But there’s all that future to go!”

On the flip side, Hayter is also constantly able to mine a lot of humour out of the series. During the panel, someone asked about a popular meme wherein Snake, as voiced by Hayter, expresses frustration that his “ass cheeks are dummy thicc” and they keep alerting the guards. Without hesitation, Hayter performs the bit, eliciting a big laugh from the crowd. In another instance, Hayter bellows “Liquid!” upon request, a clear nod to when Old Snake screams his brother’s name at the end of Metal Gear Solid 4.

I get some pretty unusual requests on Cameo…

Given all of these memories from both working on the series and interacting with fans, then, I’m curious what might be his standout.

“There’s a lot, but I’m a writer and I tend to write in the morning. So I booked time to do voices in the afternoon, so I’m always doing them after lunch. And one time, we were doing Metal Gear 3, there’s a thing if you spin [Snake] around in the game, he’ll puke, so I had to do a bunch of puking sounds,” explains Hayter, enthusiastically recreating those noises. “And I had just eaten some fast food, and on one take, I was like [mimics barfing sound] and I barfed all over the mic, and it was terrible!”

A lot more in his cardboard box

It’s nice to see Hayter remain so passionate about Snake, especially as Konami has done little with Metal Gear since its messy split with Kojima, even as the series celebrates its 35th anniversary this year. And it’s even more noteworthy when you consider how much other work Hayter has done. Beyond Snake, he’s voiced the likes of Captain America (in Spider-Man: The Animated Series), Arsène Lupin III (in Hayao Miyazaki’s The Castle of Cagliostro) and King Shark (on The Flash). And outside of voiceover, he’s an accomplished screenwriter, having penned the likes of defining comic book films like X-Men, X-Men 2 and Watchmen. He’s even directed his own film, Wolves, starring Aquaman‘s Jason Momoa.

The wait is nearly over…#WarriorNun Season 2.

His most recent project, Netflix’s Warrior Nun, is a fantasy drama about a quadriplegic orphan who discovers she has supernatural powers and joins an ancient order of warriors. Based on Ben Dunn’s Warrior Nun Areala comic book character, the first season debuted in 2020 to positive reviews, with a second season on the way. Hayter is a co-writer on the series, which was created by Canada’s Simon Barry (Continuum). With much of Hayter’s written work consisting of screenplays for film, he says working on a Netflix show with several other writers was quite a new experience.

“It’s funny. I did 20 years of just big movie screenplays on my own. And then when they wanted me to join the writer’s room for Warrior Nun, I was like, ‘maybe I’m too crazy to work with people now, because I’ve been just stuck in my office by myself for two decades,” he tells me. “But it wasn’t like that. The writers were amazing and it was so nice to have other people to bounce ideas off of. It was just a great experience. And I think together, we put together a really fun show — a really unique show. I’m really thrilled to be a part of that. It’s pretty cool.”

He’s also developing an adaptation of American McGee’s Alice, an Electronic Arts-published action-adventure game series featuring a dark and twisted take on Lewis Carroll’s iconic Alice in Wonderland. Hayter said he can’t reveal much more about it as he’s in the process of pitching it to various companies, including Netflix, but teased in the panel that it’s about “the fear of what happens when you lose your mind.”

There’s also one other character he’d love to return to: Wolverine. During the panel, moderator Sam Maggs — herself an accomplished Canadian writer — muses that Hayter would “make a great Wolverine,” garnering much applause from the audience.

@Dak_N_Jaxter “Saw you and Hugh Jackman in a picture. Closest thing to meeting Solid Snake eh?”

“Well thanks, bub, I tend to agree!” responds Hayter, noting that he’d “love” to voice the iconic X-Man in Insomniac’s upcoming Marvel’s Wolverine. “They gotta go with a Canadian!” adds Maggs, referencing the fact that Wolverine’s alter ego, James Howlett, was born and raised in Canada.

While agreeing with her, Hayter also raises another salient point: he could draw from his experiences writing the character. After all, he helped bring the fan-favourite Marvel hero to the big screen in the first place.

“Because Hugh Jackman is the nicest person in the world, I would tell the director, ‘Hugh’s so nice, we’ve got to make him mean.’ And a lot of that came from my internal viciousness, which got me through life.”

Hopefully, we’re not kept waiting too long to see what Hayter could bring to Wolverine.

Throughout both the panel and our later conversation, Hayter repeatedly mentions that he’s Canadian.

Towards the beginning of the panel, Hayter and Maggs have some good-natured fun about Canadian accents, especially when he talks about doing small voiceover roles for the Toronto-set Pixar film, Turning Red.

“It was all Canadian actors and so basically, what they wanted was people with Toronto accents to be reacting to [human-panda protagonist Mei] as she was panda-ing her way through the streets,” he explains before shifting to an endearing Canadian accent. “‘Oh my god, look at that panda, eh? Check that out, you see that? Jeez!’” So if you hear panicked Torontonians in the background, some of them are me.”

17 years ago, they asked me to make Wolverine American. I refused.

He admits that he “kinda got rid of my Toronto accident when I left Canada,” noting that he now has a “Southern California, neutral American accent.” But despite all of his Hollywood experiences, he hasn’t lost sight of his roots. To that point, he even opened the panel by thanking Toronto — what he called “the greatest city on the face of the planet” — for welcoming him back. “I’m pretty sure I’ve told every single one of you that I grew up here, because that’s what I do!”

As I see all of this, I’m reminded of a 2021 Maclean’s interview with Ryan Reynolds. In it, writer Jen Gerson mentions that “unlike a lot of people who escape Canada and never look back,” the Vancouver-born Deadpool star embraces his “Canadianness.” After spending a good chunk of the day observing Hayter at his panel and signing table, I see that he has that in common with Reynolds. Naturally, then, I have to ask: what does it mean for him to be a Canadian?

“It’s not just a matter of ‘this is where my blood’s from.’ My wife is from the States, and when we get on the plane to Toronto, as soon as we get on the plane at [Los Angeles International Airport], people are like, ‘Oh, can I help you with your bags? Or ‘oh please, you go first.’ And people are so nice and so conscious of other people’s feelings. It’s a very different headspace here. Whereas in America, it’s a little more like, ‘me first, and if, if you get to do something that’ll take away from me.’ In Canada, it just doesn’t work that way. And I also feel like my friends up here do a lot more reading and it’s just a different world,” Hayter tells me.

“And I’m proud to be a Canadian because I’m proud of the Canadian ethos. In fact, I’m friends with [Edmonton-born actor] Nathan Fillion, and he’s friends with Ryan Reynolds. And Nathan said that he had said to Ryan, ‘How do you handle it, like being in Los Angeles and just this constant stress?’ And Ryan said, ‘sometimes I just have to hop on a flight to Vancouver and be back among the Canadians and get my head together.’ And that’s how I feel when I come here. So yeah, I’m extremely proud to be Canadian. I’m so glad to be a part of this country.”