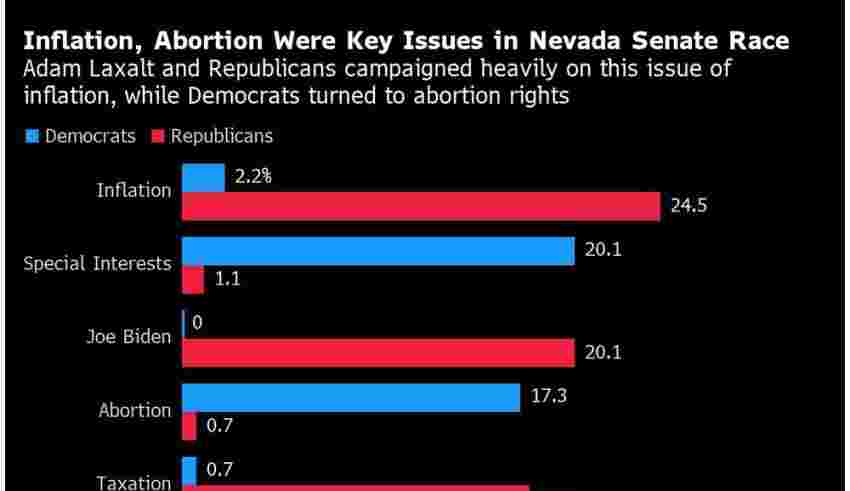 (Bloomberg) — Democrats are poised to keep control of the US Senate after Catherine Cortez Masto prevailed in the election for a closely fought seat in Nevada that opponent Adam Laxalt is likely to contest.

Two networks, MSNBC and CNN, called the race for the incumbent after she opened an 0.5 percentage-point lead in the vote count on Saturday after the Nov. 8 election. Interim results showed her leading by 48.7% to 48.2% for Laxalt.

Nevada, a battleground state where voters have strongly supported abortion rights but face some of the country’s most severe housing and energy inflation, was considered a bellwether in an election year dominated by those issues.

Cortez Masto, a first-term senator who, like Laxalt, has served as state attorney general, tarred her opponent over his disdain of the Roe v. Wade decision that was overturned this year by the Supreme Court, efforts to overturn President Donald Trump’s 2020 election defeat, and the support he’s received from oil and drug companies she accused of price gouging.

Cortez Masto, who enjoyed a fund-raising edge, had the advantage of a party machine built by her predecessor, the late Democratic leader Harry Reid, including the 60,000-member Culinary Workers Union known for its door-knocking muscle.

Laxalt, a son and grandson of New Mexico and Nevada senators who early on unified the Trump and establishment wings of his state’s Republican Party, had attacked the incumbent for spending bills and regulations he said encouraged inflation and higher gasoline prices — as well as over security at the US border with Mexico.

He sought to undermine the advantages Cortez Masto had as the first Latina elected to the Senate with the state’s growing Hispanic population by appealing to them on economic issues and crime.

The two candidates never debated, and Laxalt eschewed interviews with most major media organizations in favor of appearances on Fox News and other conservative news outlets. Trump and Republican senators traveled to the state for rallies and stump speeches.

Laxalt, 44, walked a tightrope on abortion rights after he was caught on tape calling Roe v. Wade “a joke.” He wrote a newspaper column saying Nevada’s abortion rights law would only be changed by Nevada voters, though he generally saw the issue as a distraction from what he said voters were most focused on: high prices.

Cortez Masto, 58, had been buoyed by an appearance with former President Barack Obama rather than President Joe Biden or Vice President Kamala Harris, both of whom have low approval ratings.