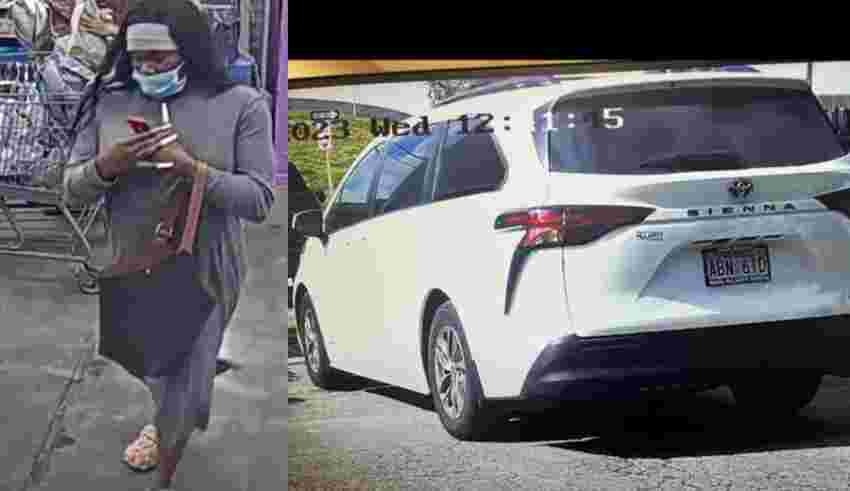 NORTH LAUDERDALE, FL – Detectives with the Broward Sheriff’s Office North Lauderdale District are seeking the public’s help to locate a vehicle and woman sought in connection to a car burglary at a local cemetery.

According to authorities, the crime occurred just before 1 p.m. on Wednesday, January 4, near the 1500 block of South State Road 7 in North Lauderdale. According to investigators, the victim parked her silver 2021 Toyota RAV4 in the roadway on the east side of the cemetery to visit her loved one. When she returned, her vehicle’s rear driver-side door window was shattered, and her mother’s purse was taken.

The victim told investigators that she noticed a white van in the area prior to the break-in. Detectives obtained an image of the vehicle, and the car was identified as a newer model 2021 Toyota Sienna van with an Arkansas tag of ABN61D. Investigators say the occupant or occupants of the vehicle are persons of interest, as the car was parked near the victim’s RAV4 at the time of the burglary.

Immediately following the incident, a female subject wearing a mask, gray dress, and pink slippers, carrying a black bag, was seen on video surveillance attempting to purchase a $500 gift card at a local store using a credit card from the stolen purse. The transaction was declined, but the crime was caught on camera.

Detectives ask anyone with information on the white 2021 Toyota Sienna Van or the female’s identity to contact Broward Sheriff’s North Lauderdale District Detective Lisa Sokol at 954-720-2261 or submit a tip through the SaferWatch App. If you wish to remain anonymous, please contact Broward Crime Stoppers at 954-493-TIPS (8477), online at browardcrimestoppers.org, or dial **TIPS (8477) from any cellphone in the United States.