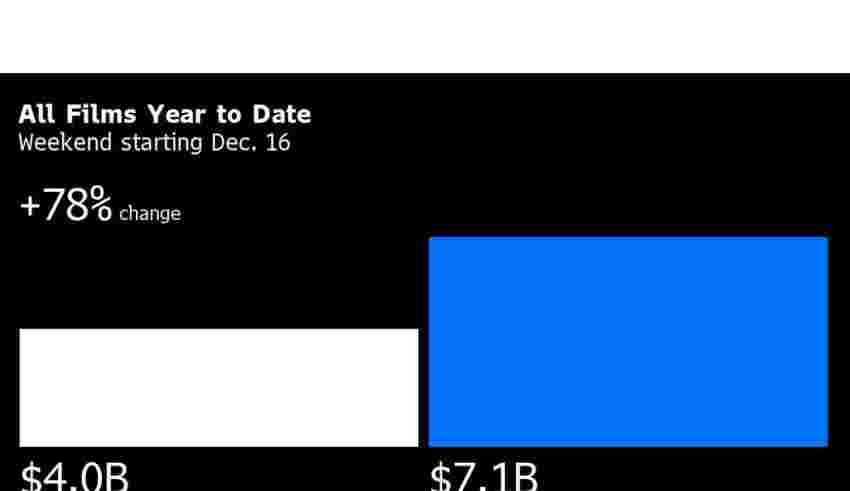 (Bloomberg) — Walt Disney Co.’s Avatar: The Way of Water generated $134 million in US and Canadian theaters in its debut weekend, results that fell short of some estimates for one of the most highly anticipated films of the year.

The picture had been expected to take in between $145 million and $179 million, according to researcher Boxoffice Pro. Disney lowered its own forecast to more than $130 million on Saturday, from a previous projection of more than $150 million.

The Way of Water produced an additional $301 million in sales internationally, the company said in a statement Sunday.

The number puts the picture in a tie for fifth place with the Warner Bros. film The Batman for the biggest opening weekends of the year domestically. The two best openings belong to Disney’s Doctor Strange in the Multiverse of Madness, which brought in $187 million in May, and Black Panther: Wakanda Forever, which generated $181 million in November, according to Comscore Inc. data.

The results are likely to be viewed as a disappointment for theater stocks such as AMC Entertainment Holdings Inc. and Imax Corp., which are still struggling to attract large audiences since the pandemic. Many exhibitors had high hopes for the picture.

It may also be hard for Disney to recoup its investment. The production costs alone forThe Way of Water have been reported by various news outlets to be greater than $350 million. Director James Cameron said an interview with GQ that it would have to be the third or fourth highest-grossing movie of all time to make a profit, suggesting receipts of greater than $2 billion.

The performance may also raise concerns about the overall franchise going forward. Disney shot two films at once, and plans as many as five in total, stretching out to 2028.

The Way of Water ticket sales may have been held back by its three-hour-plus running time, which limits the number of showings a theater can schedule. An extraordinarily high 57% of viewers watched the film in 3D. While that higher-priced format will boost revenue, some viewers may have waited to buy tickets until they could find a good seat in a 3D theater.

The first Avatar was the highest-grossing picture of all time with $2.92 billion in box-office sales. It’s potentially the most significant film franchise to come from Disney’s $71 billion purchase of Fox’s entertainment assets in 2019. The former Fox studios have produced a number of movies that fell short at the box office, including Amsterdam and a remake of West Side Story.

The Way of Water  was among the widest releases in Disney history, debuting on over 12,000 screens in the US and Canada and 40,000 internationally.

It will have a long runway to generate more sales over coming weeks. Only four other films are getting wide releases in the US this month, half the number of pre-pandemic times, according to Comscore.

The picture follows the story of a moon called Pandora and the colonization that threatens the indigenous Na’vi humanoid race that inhabits it. About 78% of critics recommend it, according to the review site RottenTomatoes.com.

Spotify hits over 200 million subscribers, becoming first music streaming service to do so

Spotify reveals that it continues to see an increase in paid subscribers, becoming the fir…