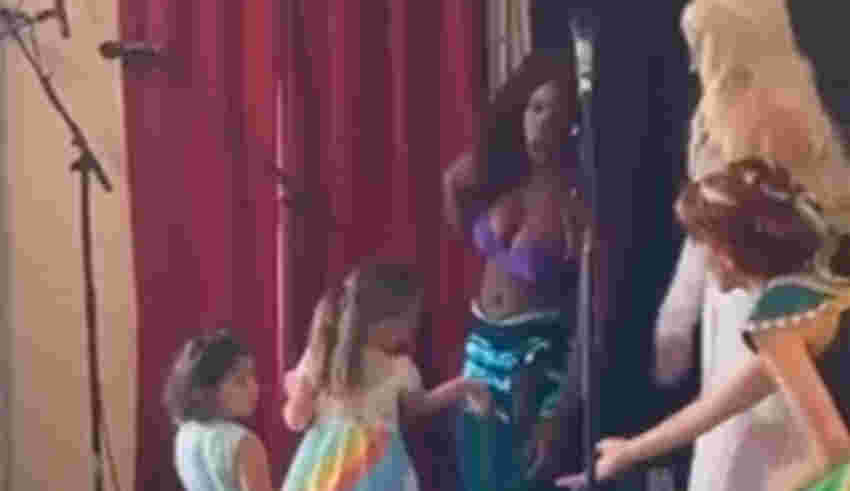 PORTSMOUTH, OH – In a 2018 opinion piece, I wrote about pedophiles dressing up like Santa Claus during the Christmas holiday to be around children. Why would an adult man dress in a hideous drag queen costume and dance with young children?

Folks, I don’t care if the radical Lefty liberals brand me as a phobic person, a conservative fruitcake, or any hung-up label they want to hang on me – drag queens have no business indoctrinating children. It will always be inappropriate for children to see and/or experience sexually explicit adult entertainment; whether in a shady nightclub, at a sunny parade, or in a bookstore or library. It’s a form of disgusting depravity.

Adult drag queens that entertain other adults – that’s their own business. But, why aren’t these males speaking out against the sexualization of children in bars, parades, and libraries?

I read an opinion piece at PJ Media, watched the sickening video, and agreed with Lincoln Brown.

“Yes, that was a child stroking the crotch of a drag queen, who does not seem to have a problem with it at all. The video’s poster said that it was taken Saturday at the Chattanooga Pride Youth Day at Wanderlinger Brewing Company. I had to watch the video a few times just to make sure I was seeing what I hoped I wasn’t seeing. I really wanted it to not be what it was so I could tell the editors I was canceling the story. But I am sorry to say, it is exactly what it appears to be,” declares Brown.

Watch the stomach-turning video at the PJ Media website or at Rumble.

Another male performer laid on the floor and exposed his crotch with a leg raised into the air. And he wasn’t wearing boxer shorts or briefs, but what kind of looked like black panties.

Brown continues, “Please, tell us: What is family-friendly about a child stroking a grown man’s groin? Give us the evidence for how something like this will result in a stable childhood and a well-adjusted adult. We would be interested to hear your reasoning. We won’t believe it, but we would be interested in hearing it. And while you’re at it, tell us how this is not grooming. What part of that clip does not constitute the sexualization of children?”

And of course, adults with sense and sanity knew the slippery drag queen slope would eventually lead to kids performing in drag.

“The Idaho Department of Health & Welfare withdrew its sponsorship on Thursday for the City of Boise’s Pride festival, which offers multiple programming opportunities for children, and that feature children including afternoon drag shows, as well as a Drag Story Time, and an event called Drag Kids…On Wednesday, Zions Bank pulled its support of the Pride festival after realizing that children would be featured as drag performers at the event. Idaho Power has also pulled its sponsorship. Columbia Bank is also considering dropping its support of the event,” according to a September 2022 article in The Post Millennial.

A recent article in Florida’s Voice reported on Gays Against Groomers, a new coalition of gay people created to stop the sexualization and abuse of young children.

According to the Gays Against Groomers website, “The overwhelming majority of gay people are against what the community has transformed into, and we do not accept the political movement pushing their agenda in our name. Gays Against Groomers directly opposes the sexualization and indoctrination of children. This includes drag queen story hours, drag shows involving children, the transitioning and medicalization of minors, and gender theory being taught in the classroom…There are millions of gays within the community that want nothing to do with this Alphabet religion and join the fight with parents and concerned people everywhere to protect children. We also aim to return sanity and reclaim the community we once called our own.”

“Drag queen Kitty Demure’s two-minute lecture to woke parents from 2021 has resurfaced on social media where the performer says in no uncertain terms that kids should stay the hell away from their shows,” according to a 2022 article in Townhall.

“Demure is blunt about drag shows: “it’s an adult thing.” There’s a lot of nudity, drugs, and sex backstage. This is why the venue is a nightclub for adults. That’s why this is raising eyebrows. It’s not that the performers are gay. That battle is dead. It’s the fact that these shows are meant for adults, not kids,” the article continues.

Peruse another opinion piece on drag queens at libraries in The Published Reporter.

But the most salient questions: Why are parents exposing their children to adult men twerking and jerking, dancing and prancing, swinging and singing? It is just a sad/bad fad of wokeness? Or something else?

Clifford Chance advises Cinven on the sale of group.ONE to a consortium of the Seventh Cinven Fund and OTPP