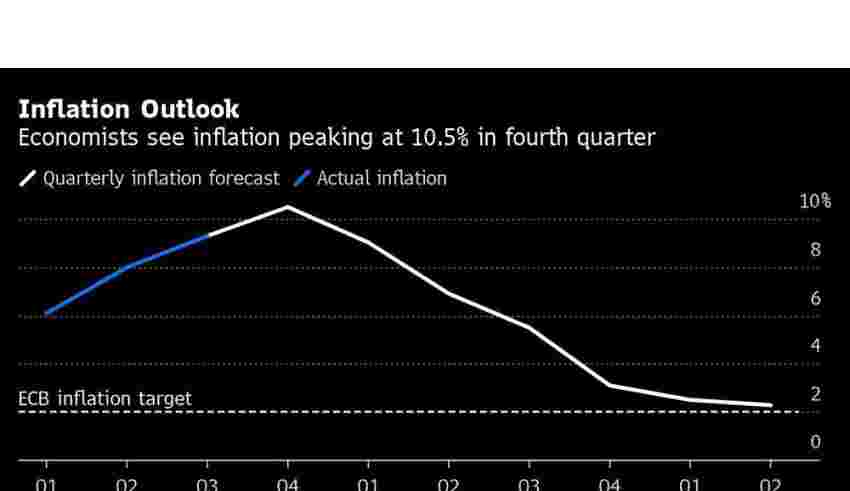 (Bloomberg) — The European Central Bank will probably receive several hundreds of billions of euros in early repayments of long-term loans this year after officials toughened the terms of the program to aid their fight against inflation.

Estimates vary widely on how much of the €2.1 trillion ($2.2 trillion) in outstanding cash will be returned this month, the first available opportunity for repayments. Banks have until Wednesday to notify the ECB if they want to do so.

Forecasts in a Bloomberg survey of economists for the November total range from €200 billion to €1.5 trillion. The median estimate is for €600 billion, followed by €285 billion at the next scheduled date in December.

A higher number might cheer the ECB, which last month changed the conditions of the lending program that flooded European banks with liquidity during the pandemic crisis. Officials said they acted in light of record inflation, and to ensure the measure is consistent with their increasingly rigid policy stance.

The altered terms also eliminated an arbitrage opportunity that allowed lenders to park cash in the ECB’s deposit facility and earn a risk-free income. Results for the first repayment opportunity will be published on Friday.

“Predicting TLTRO repayments has been subject to large uncertainties,” said Piet Christiansen, chief strategist at Danske Bank. “This time around is no different with the new terms needing to be balanced with year-end liquidity patterns and regulatory factors.”

Analysts expect more than €1.6 trillion to be returned by the end of the second quarter.

The first repayments this year could have a direct impact on the ECB’s policy path, according to Carsten Brzeski, an economist at ING.

“Balance sheet reduction (including QT) would become a substitute for rate hikes in 2023,” he said.

Separately, economists increased their euro-area inflation forecasts for this year and next. They also forecast Germany to experience a deeper recession than in a previous survey round while the currency bloc as a whole contracts 0.1% in 2023.

“High inflation in general and massively increased energy costs in particular will cut off the air to private households and lead to a contraction of private consumption,” Joerg Angele, an economist at Bantleon Bank. “In addition, companies will cut back on their investments as a result of the sharp rise in costs, weakening demand and significantly higher interest rates.”