Home Business Economists Place 70% Chance for US Recession in 2023 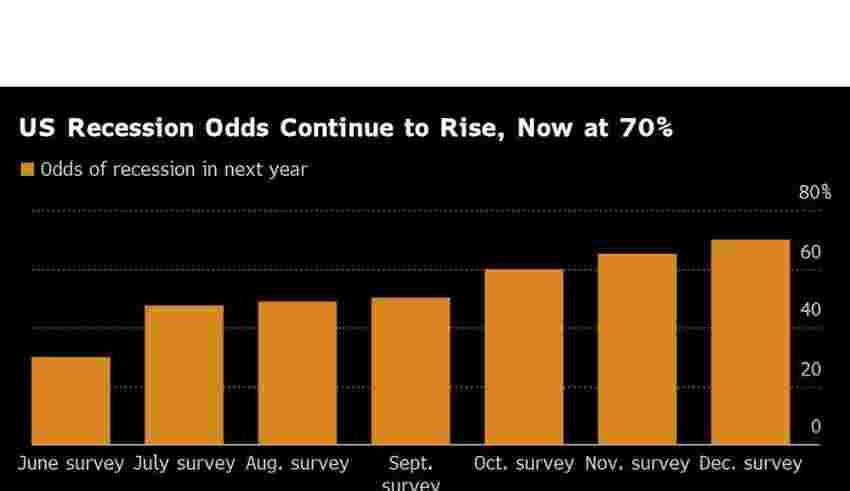 (Bloomberg) — Economists say there is a 7-in-10 likelihood that the US economy will sink into a recession next year, slashing demand forecasts and trimming inflation projections in the wake of massive interest-rate hikes by the Federal Reserve.

The probability of a downturn in 2023 climbed from 65% odds in November and is more than double what it was six months ago, according to the latest Bloomberg monthly survey of economists. The poll was conducted Dec. 12-16, with 38 economists responding about the chance of a recession.

The median estimates see gross domestic product averaging a paltry 0.3% next year, including an annualized 0.7% decline in the second quarter and flat readings in the first and third quarters. Consumer spending, which accounts for about two-thirds of GDP, is projected to barely grow in the middle half of the year.

“The US economy is facing big headwinds from surging interest rates, high inflation, the end of fiscal stimulus, and weak export markets abroad,” said Bill Adams, chief economist at Comerica Bank. “Businesses have turned cautious about adding to inventories and hiring, and will likely delay construction and other capex plans with credit more expensive and order books shrinking.”

Inflation as measured by the Fed’s preferred gauges — the personal consumption expenditures prices index and the index that strips out volatile food and energy components — is seen softening but still running well above the central bank’s 2% goal.

That explains why Fed Chair Jerome Powell signaled last week, after the central bank raised its benchmark interest rate to the highest level since 2007, more tightening is in store for early next year. Powell also made clear that the Fed isn’t considering cutting rates in 2023. This year, the Fed raised rates by 4.25 percentage points, including four 75 basis-point hikes.

A key reason the Fed is likely to keep higher rates in place for an extended period is the resiliency of the job market. As the economy weakens, however, employment is seen succumbing. Economists expect payrolls to decline in the second and third quarters, and by the first quarter of 2024 the jobless rate is expected to peak at an average 4.9%.

And after firmer growth in the first half of the year, average hourly earnings are forecast to cool.

As high inflation and borrowing costs deal a blow to household finances, businesses are also seen pulling back. Economists project bigger declines in private investment, which include spending on equipment and structures, in the first three quarters of 2023 than they did a month ago. Those outlays are seen falling 3% on average.

Less investment, weak household spending and a global economy on the brink of a recession will hit the nation’s manufacturers particularly hard. The Bloomberg survey shows economists downgraded their estimates of industrial production for every quarter next year. Output is now seen averaging a 0.7% decline in 2023, much weaker than the 0.2% increase that was projected in November.

—With assistance from Reade Pickert.