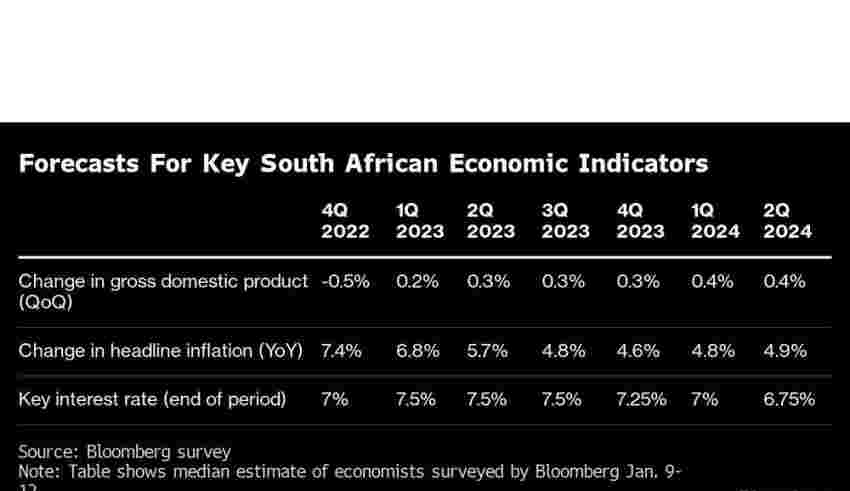 (Bloomberg) — Africa’s most industrialized economy faces a 45% chance of slipping into recession this year as South Africa’s electricity crisis deepens.

The probability of it happening in the coming 12 months increased from odds of 35% in November, around the start of the longest streak of consecutive daily power cuts. That’s according to the latest Bloomberg monthly survey of economists, conducted Jan. 9-12, with 7 economists responding to a question about the chance of a recession.

Eskom Holdings SOC Ltd., the state-owned company that produces almost all of South Africa’s electricity, has for the past seven days subjected the country to record blackouts — as much as 12 hours a day — to protect the power grid from collapse as its aging, mostly coal-fired power stations fail.

It has already used up money for diesel supplies allocated to fuel auxiliary plants for the year through March and a unit at its nuclear station is shut down for a revamp, meaning any additional faults among its assets and infrastructure could move South Africa to its highest level of outages yet.

Sustained outages, known locally as loadshedding, at the current “extreme levels” are the most significant downside risk to the country’s economic growth prospects, the Bureau for Economic Research’s Tracey-Lee Solomon, Romano Harold and Hugo Pienaar said in note published on its website on Monday.

The economy is unlikely to grow by more than 0.3% quarter-on-quarter through 2023, according to Bloomberg’s survey. Economists see gross domestic product growth slowing to 1.2% this year from 2.3% in 2022.

While inflation is expected to ease, it’ll only be back near 4.5% — the midpoint of the central bank’s target range at which the monetary policy committee prefers to anchor price-growth expectations — in the fourth quarter, before accelerating again into 2024.

The South African Reserve Bank will probably extend its most aggressive monetary policy tightening in at least two decades, with the key interest rate rising to 7.5% by the end of the first quarter from 7% now. A gradual easing of borrowing cost will start in the fourth quarter, according to economists. The central bank will give its next decision on the benchmark rate on Jan. 26.

—With assistance from Rene Vollgraaff.