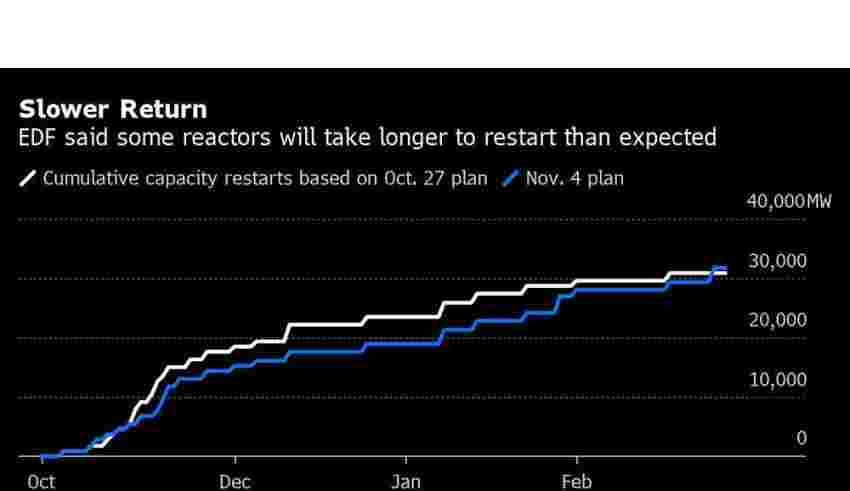 (Bloomberg) — Electricite de France SA cut its power-production outlook for the fourth time this year, dealing yet another blow to Europe’s energy system as winter approaches.

The nuclear giant dialed back its 2022 forecast, citing checks and repairs at its fleet of reactors and labor strikes that curbed production last month. The move puts further strain on energy supplies, not only in France but in neighboring countries, where costlier fossil-fueled power must be used to fill the gap.

EDF now expects as little as 275 terawatt-hours from its atomic plants this year, down from an earlier estimate of at least 280 terawatt-hours, it said Thursday. The utility has extended outages at four reactors that were due back online in the coming weeks, with startup now projected for late January and February because of inspections and repairs related to “stress corrosion.”

The technical faults that have hobbled EDF reactors this year have put a hole in its finances and made France — typically an exporter of power to its neighbors — a net importer, contributing to a spike in energy prices across Europe. French baseload power for January jumped as much as 24% on Friday.

Reactor maintenance has also been set back by a wave of strikes, with members of the CGT union walking out last month to push for higher wages amid soaring inflation.

The latest outage extensions affect EDF’s Chooz B1, Penly 2, and Cattenom 1 and 3 plants.

EDF will have to repair cracks on pipes at Cattenom 1 before it can restart it, the French nuclear safety authority said Thursday. The utility is also carrying out additional checks at its plant in Chooz, where it found another crack that needs to be fixed, a company spokesman said Friday. It will replace pipe parts at the Cattenom 3 and Penly 2 units after detecting similar signs of faults.

EDF’s forecasts for nuclear output in 2023 and 2024 remain unchanged.