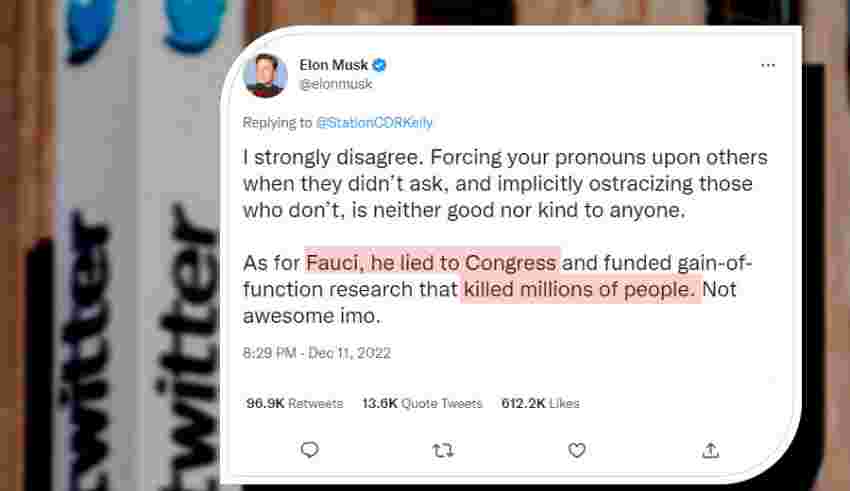 SAN FRANCISCO, CA – Twitter CEO Elon Musk called out Dr. Anthony Fauci for allegedly being indirectly responsible for killing “millions of people” during the COVID-19 pandemic, suggesting in a Sunday tweet that the chief White House medical advisor and infectious disease expert should be prosecuted.

In addition, the South African tech tycoon also used the opportunity to take a dig at individuals who share their preferred pronouns in their posts as well.

On Sunday morning, Musk, 51, issued a tweet saying, “My pronouns are Prosecute/Fauci,” and followed it up with a second post containing a doctored image depicting Fauci whispering “JUST ONE MORE LOCKDOWN MY KING…” into the ear of President Joe Biden, referring to lockdown measures used during the pandemic in order to curb the spread of the virus.

Later in the day, after a Twitter user took Tesla CEO to task for seemingly making fun of gender pronoun users, Musk defended himself while also explaining why he had attacked Fauci as well.

“Forcing your pronouns upon others when they didn’t ask, and implicitly ostracizing those who don’t, is neither good nor kind to anyone,” he said. “As for Fauci, he lied to Congress and funded gain-of-function research that killed millions of people. Not awesome imo.”

Fauci, 81, has been repeatedly accused of lying by House Republicans about the National Institute of Allergy and Infectious Diseases (NIAID) – of which he serves as director, although he will be stepping down at the end of the year – having been responsible for funding so-called “gain-of-function” research at the Wuhan Institute of Virology (WIV), where some believe that COVID-19 had been created and leaked, leading to a worldwide pandemic.

According to the Centers for Disease Control and Prevention (CDC), COVID-19 has been responsible for the deaths of 1.1 million Americans, including 2,981 last week.

This $5.4M Ferrari LaFerrari Aperta For Sale Is 1 Of 210 In Existence

It’s not often that one of these legendary cars is up for sale. The LaFerrari was part of …