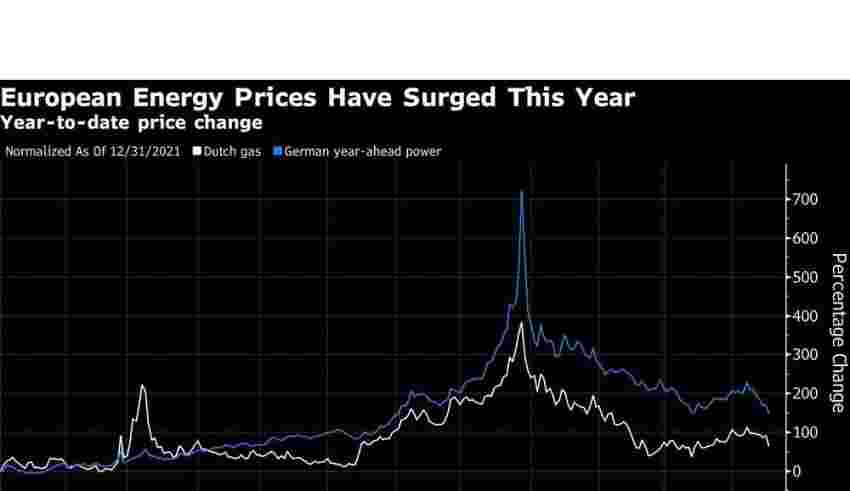 (Bloomberg) — European Union member states will on Monday discuss a gas-price cap that’s almost one-third lower than an original proposal as they attempt to break a deadlock over the controversial proposal to contain the impact of a historic energy crisis.

The Czech government, which holds the EU’s rotating presidency, suggested lowering the ceiling to €188 euros per megawatt-hour compared with the €275 proposed by the European Commission last month. The latest revision, shared with member states on Saturday and seen by Bloomberg News, comes just days after the bloc’s leaders threw their weight behind a quick agreement on the market intervention measure.

The plan will be discussed by energy ministers at their Dec. 19 meeting. The proposal to step into the market, demanded by a group of member states as far back as the spring, has caused a deep rift among governments. In recent weeks Germany led a push for a cautious approach while Belgium, Greece, Italy and Poland demanded a more aggressive tool, with the price cap at below €200.

At stake is the future of the bloc’s $17 trillion economy, where soaring energy prices have already fueled inflation and is threatening to push the region into recession. With Europe battling a blast of winter weather, governments are under increased pressure from voters to act or risk a backlash.

A deal on the gas-price cap would also unlock a broader package of measures to rein in high energy costs that have sent businesses and consumers reeling. Gas and power prices soared to records earlier this year after Russia’s deep gas supply cuts following the war in Ukraine.

Under the latest revision, the so-called gas market correction mechanism would kick in when month-ahead to year-ahead contracts on the Dutch Title Transfer Facility exceed €188 per megawatt-hour for three days. It would also require the gap with a pre-defined basket of LNG prices to be greater than €35.

In addition, the new draft enables the European Commission to stop the intervention if it undermines gas-demand reduction measures adopted by the EU. The executive body would also immediately suspend the mechanism if it endangers the security of supply, with a drop in LNG supply being one component in assessing the risk.