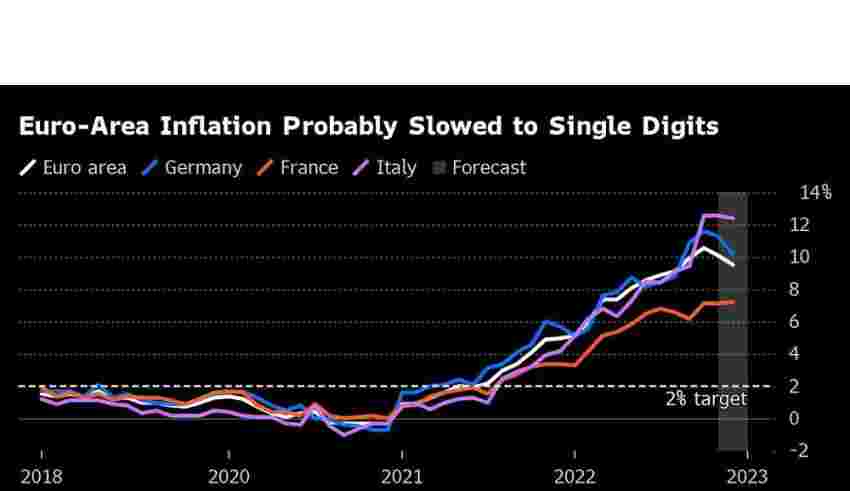 (Bloomberg) — The worst year of inflation in euro-zone history probably ended with a touch of respite as the pace of cost increases returned to single digits, economists say.

The initial reading for December due on Jan. 6 will show annual consumer-price gains slowing to 9.5%, from 10.1% the previous month, according to the median of 28 forecasts in a Bloomberg survey.

So-called core inflation, which strips out volatile elements such as food and energy, held steady at a record 5%, the economists predict.

Consumer-price data have taken on even greater significance in recent months, with European Central Bank officials using such reports to help determine the aggression of their policy. After inflation slowed in November, they tempered the pace of interest-rate increases, albeit with a decision that pledged further tightening moves.

While the direction of those last numbers suggested the price shock may be easing, the ECB has sought to instill caution. Chief Economist Philip Lane said earlier in December that “whether this already is the peak or whether it will arrive at the start of 2023, is still uncertain.”

Three forecasts in the Bloomberg survey anticipate that inflation may have accelerated again, with economists at HSBC Bank Plc predicting 10.7%, an outcome that would exceed October’s record of 10.6%.

The readings due next Friday will be one of two that ECB policymakers will consider before their next decision on Feb. 2. The data for January will be release on the eve of that meeting.

December inflation will arrive at the end of a week of national numbers from around the euro region.

Consumer-price reports in Germany on Tuesday and in Italy on Thursday are expected to show slowing, and France on Wednesday may have seen an acceleration, while still staying much lower than most of the currency area.