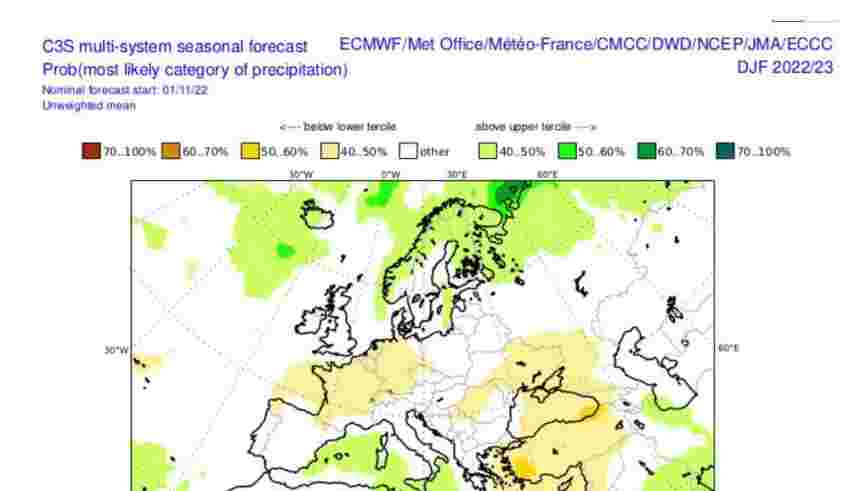 Scientists at Copernicus reported Sunday in their most-closely-watched seasonal forecast that coastal regions along the Baltic, Mediterranean and North Sea are almost certain to see temperatures exceeding historical averages. The degree of certainty of warmer weather rose over the last month.

Abnormally high temperatures could slacken demand for natural gas, which European countries have been rushing to put into storage. Russia’s war on Ukraine propelled prices for the fuel to record heights, contributing to a cost-of-living crisis across the region.

There is a 50% to 60% probability that temperatures will be significantly above historic norms across much of the UK, central and southern Europe. Warmer temperatures would help to prevent scarce natural gas reserves from being depleted.

“With most weather models predicting relatively mild conditions for the rest of 2022, there will probably be sufficient gas to meet demand even in the event of a cold start to 2023,” Eurasia Group wrote in a note published before Sunday’s Copernicus report.

Much of France and Germany also have a 40% to 50% probability of experiencing well-below average precipitation over the next three months. Lack of rain and snowfall could impact inland river transport and hydropower operators, as well as affect the ski season.

The Copernicus model combines data from scientists in the UK, France, Germany, Italy and the US. The EU program uses billions of measurements from satellites, ships, aircraft and weather stations around the world for its monthly and seasonal forecasts and concluded that 2019 was the continent’s hottest year on record.

Globally, Copernicus reported with 60% to 70% certainty energy markets across the central and southern US as well as much of China, Japan and Russia will have winter temperatures well above normal — a signal that long-term global warming trends are impacting economies.