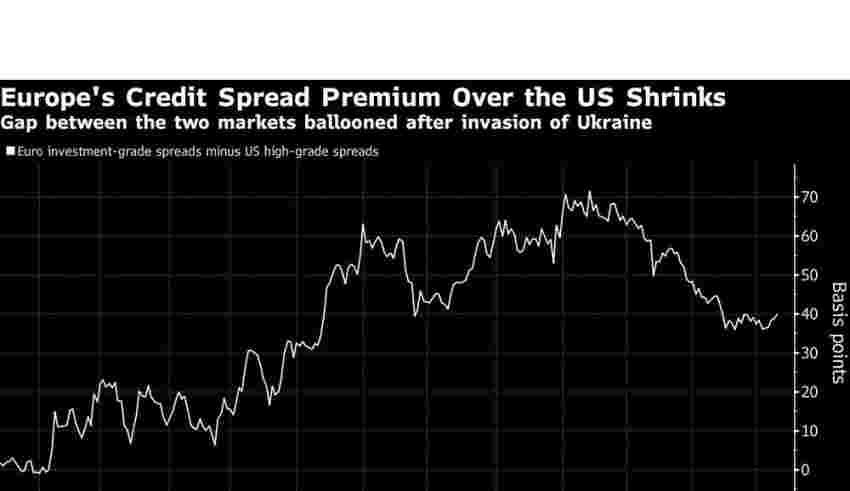 After years of playing second fiddle to the US, European assets are now charging ahead and leaving Wall Street in the dust.

Euro-area equity markets are up 38% since the end of September in US dollar terms, and enjoying their best start to a new year ever. Meanwhile, the region’s investment-grade credit is ahead of its US peers by 6 percentage points over the same period, and the euro currency has jumped 10% versus the greenback.

The key driving forces behind Europe’s revival have been the mild winter, which has soothed investors’ worries over the region’s energy crisis, and the sudden reopening of China — a crucial market for many European industries. And this may just be the beginning: European stocks remain cheaper than their 20-year average despite the recent rally, and top strategists from Citigroup Inc. and Goldman Sachs Group Inc. are upgrading their view on the region.

“We went through 2022 and this huge regime shift, from a world of ultra-low rates to a world where there is a cost of capital, and valuation matters,” said Grace Peters, JPMorgan Private Bank’s head of investment strategy. “Within that high level overview, Europe looks attractively valued, at about a 30% discount to the S&P 500. So despite the recent outperformance, I think that can continue.”

Beyond equities, corporate bonds — which contributed to the busiest week of issuance ever — have attracted bullish calls from JPMorgan Chase & Co. and Deutsche Bank AG after suffering disproportionately last year amid the war in Ukraine. In currencies, Wall Street is betting that the euro’s rally is just getting started.

Even after data this week showed US inflation cooled in December — raising hopes that the Federal Reserve will slow its pace of interest-rate hikes — European stocks still outperformed on the day.

Still, history doesn’t bode well for Europe. The last time it significantly outpaced the US was from 2005 to 2007, according to data compiled by Bloomberg. Although there have been attempts since, none have lasted long.

And there are risks now, from the war in Ukraine to the threat of a cold snap that reignites the energy crisis. And because the European Central Bank was slower than others to start rate increases, its tightening has some ways to go.

For now, the new confidence coincides with surveys showing resilience in business activity.

In Germany, the economy probably stagnated in the final quarter of 2022, defying expectations for a contraction, and UK output is also looking stronger than anticipated. Economists at Goldman Sachs no longer predict a euro-zone recession this year.

On top of all that are the attractive valuations. The Stoxx Europe 600 Index trades at about 12.7 times forward earnings compared with 17 times for the S&P 500, according to data compiled by Bloomberg.

The European benchmark is also cheaper than its 20-year average while its US peer trades above that level. Even in corporate credit, analysts and investors say European valuations are far better than the US.

“Simply looking from an index perspective, markets outside the US would appear to offer considerably better value,” said Charlotte Ryland, co-head of investments at CCLA Investment Management.

Part of that comes down to Europe’s lower exposure to growth-linked technology stocks. The group of Facebook-owner Meta Platforms Inc., Apple Inc., Alphabet Inc., Netflix Inc., Amazon.com Inc. and Microsoft Corp. makes up nearly a fifth of the S&P 500. It was also hammered last year as rising rates hurt expensive sectors by increasing the discount for the present value of future profits.

The outlook for the sector remains grim as it struggles to rein in costs amid weaker demand following a post-Covid boom.

Europe, on the other hand, is more heavily weighted toward sectors that would benefit from higher interest rates, such as financials. Goldman Sachs strategists said they expect such cheaper, so-called value stocks to outperform again in 2023.

That trend is already visible in the share price of LVMH and other luxury stocks. The sector remained resilient to the slump in global equities last year and its outperformance against US tech continues.

Markets with exposure to China are also emerging as winners. Germany’s benchmark DAX index is up 8% already this year, more than twice as much as the S&P 500.

“I expect European markets to keep outperforming US stocks this year,” said Wouter Sturkenboom, chief investment strategist for EMEA & APAC at Northern Trust Asset Management. “Europe is a bet on value, while the US is a bet on growth, and value has further to go for now.”

In the credit world, JPMorgan strategists led by Matthew Bailey argue that the “balance of global risks is starting to shift away” from Europe.

They expect the premium embedded in European bonds since Russia’s invasion of Ukraine to drop all the way to zero. The gap between European and US high-grade spreads — which last year hit its widest since the euro area’s debt crisis a decade earlier — has already shrunk by almost half since peaking in October.

In the high-yield world, UBS AG analysts see a US default rate of 6.5%, or about three percentage points higher than Europe.

But there are cautious voices here too. At HSBC Holdings Plc, strategists have tempered their optimism around euro-area credit, saying ECB hikes are still feeding through to the economy, and industries haven’t shown how they can adapt to an era of higher energy costs.

“There’s a number of factors including a stronger euro that support Europe’s outperformance against the US to continue for now,” said Ipek Ozkardeskaya, senior analyst at Swissquote. “But at the same time, neither region is out of the woods just yet, and another important selloff would not be a surprise in both markets.”

—With assistance from Michael Msika.