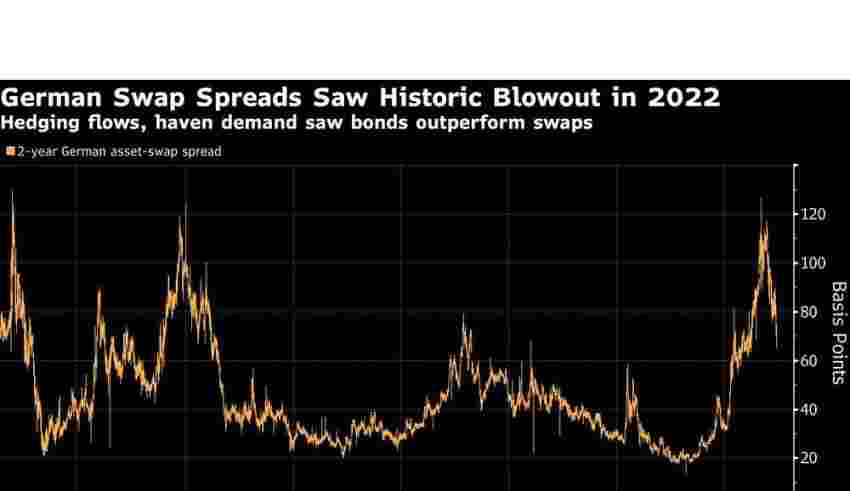 (Bloomberg) — For European bond traders, 2022 was the year the playbook that served them so well during the past decade was ripped to pieces.

German and UK 10-year yields saw their biggest yearly surges on record, as sovereign bond markets were whiplashed by rampant inflation and uncertainty over how policy makers would respond to it.

In a rare occurrence that marked a break with the era of negative interest rates and quantitative easing, implied volatility in euro-area rates surpassed that of the US, while trading costs in core European sovereign bond markets surged.

The upheaval is ongoing. Inflation is still far from quashed and the European Central Bank and the Bank of England are expected to further raise rates, adding to the 250 basis points and 325 basis points of tightening already delivered this year respectively.

Meanwhile, the consequences of prolonged war in Ukraine — and what it means for Europe’s energy security — as well as the looming end to Covid-19 restrictions in China will add to further uncertainty for the region’s markets.

Here are some of the big shake-ups that have roiled markets this year:

Euro rates volatility as implied by swaptions surpassed its US equivalent in some tenors this year, a major shift in market dynamics. Until recently, price swings in euro-area bond markets were notoriously low due to the ECB’s quantitative easing and subzero interest rates.

Part of that is down to uncertainty over where interest rates will end up. Europe’s inflation is largely driven by energy prices, making it harder for both investors and policymakers to predict.

The lack of clarity over inflation and the path of tightening led traders to pile into cash-like highly-liquid assets such as short-end German government bonds. Meanwhile, swap rates were spurred higher as demand for hedges against rising borrowing costs surged. The gap between the yield of short-end bonds and swap rates touched a record high in September.

Authorities have sprung into action to help ease an anomaly that caught many traders off guard.

The ECB suspended its 0% cap on some deposits held at euro-area central banks until the end of April 2023 to avert a flood of government cash into money markets. Moves by both Germany’s debt agency and the ECB to increase the supply of paper available to be lent in repo markets, and positioning for a splurge of new issuance in 2023, also helped alleviate the squeeze.

Historic moves in yields across the euro area and UK bond markets also caused havoc for bond traders whose hedging strategies were thrown into disarray.

During periods of low volatility, determining which bond is cheapest to deliver for a given futures contract is easy and doesn’t change. However, this year, violent moves distorted yield curves and caught traders wrong footed as those securities switched unexpectedly.

In the gilt market, the swings became so disruptive that brokers at Tradition said the March gilt future was the hardest to price since the contract was introduced in 1982.

It also became more expensive to put on trades, according to a gauge of the cost of liquidity from Tradeweb. The firm compares prices at which trades are actually executed at with the composite price, or the price from “a cross-section of liquidity providers”.