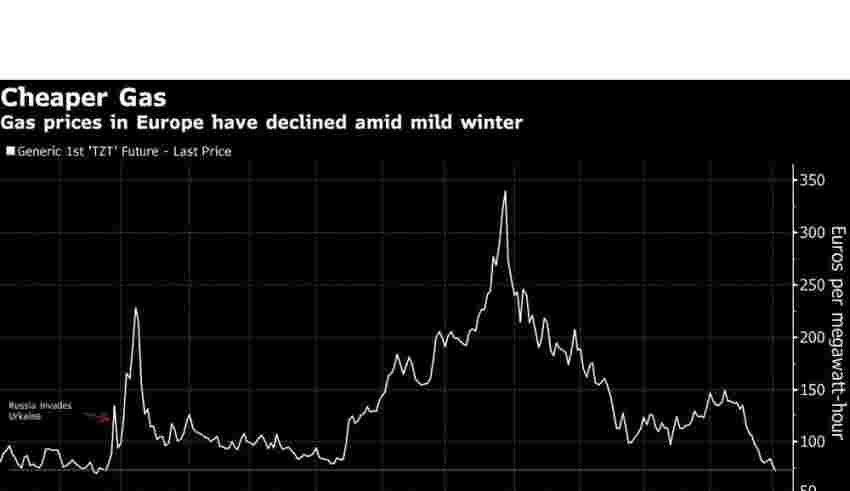 Benchmark futures dropped as much as 7.9% to the lowest level since February 21, extending three weeks of net declines. Weather forecasts point to temperatures above seasonal norms for most of the region in the next two weeks, which will help Europe avoid depleting its stocks too soon as it goes through the winter.

After a year of extreme volatility — with energy costs reaching record highs amid Russia’s war in Ukraine — the market starts 2023 less stressed. Gas prices declined about 47% in December as Europe managed to replace much of Russia’s curbed flows with supplies of liquefied natural gas.

Milder temperatures for an extended period, together with a typical year-end slowdown in industrial demand, may help the region keep inventories well stocked until the end of the season. Lower gas prices are also a relief for the European economy, which is pressured by high inflation rates.

German Chancellor Olaf Scholz said the energy crisis triggered by Vladimir Putin’s invasion of Ukraine was a “tough test” for the continent’s biggest economy and urged citizens to continue saving energy in the months ahead. Germany’s gas storage levels rose to 90% over the past week, compared with a five-year average of 73% for this time of year, according to Gas Infrastructure Europe.

New LNG import terminals “are making our country and Europe independent of Russian gas for the long term,” Scholz said in his New Year’s address to the nation.

Dutch gas futures for next month traded 2.7% lower at €74.28 per megawatt-hour by 10:20 a.m. in Amsterdam. The overall volume of trading was lower due to a holiday in the UK. Power prices were also down, with German month-ahead futures losing 4.5%.