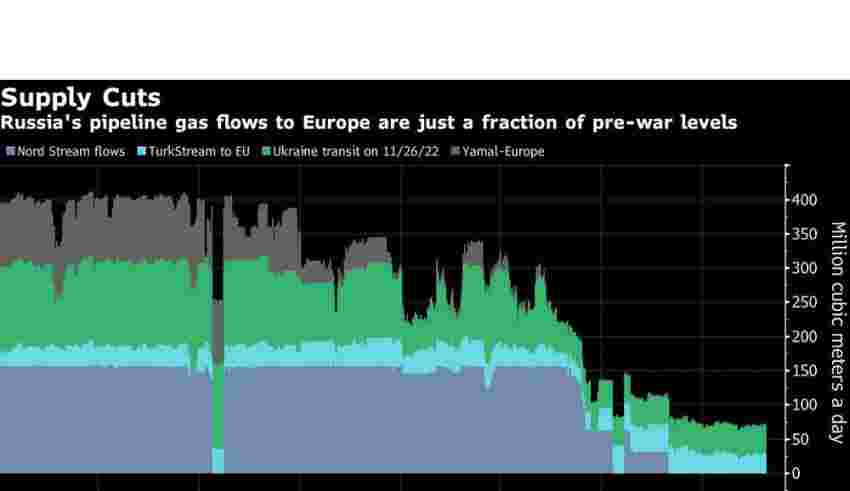 (Bloomberg) — Natural gas prices in Europe fluctuated on Monday as Russia’s decision not to cut flows via Ukraine countered concerns that cold weather could boost demand.

Benchmark futures declined as much as 2.9% after paring gains. Russia’s Gazprom PJSC decided not to curb gas shipments to Moldova via Ukraine, easing concerns that it might eventually completely halt supplies through the route. At the same time, weather forecasts point to temperatures below seasonal norms across Europe over the next weeks, which could increase gas use for heating.

The continent is starting the winter heating season with reservoirs almost full after a huge effort to tap gas from across the globe to replace Russian supplies. But the possibility of a cold snap combined with supply curtailments has raised concerns that the market could tighten and stocks could be quickly depleted in the coming months.

Russia’s energy giant had warned it could curb flows via Ukraine — the last remaining route for its gas to western European nations — from this week amid a spat over fuel for Moldova. But a recent payment issue between the small nation and the Russian gas producer has been resolved, according to a statement on Gazprom’s Telegram channel.

Meanwhile, natural gas demand for power generation could also get a boost in Europe as wind output potential is expected to be low in the next couple of weeks, according to a report of The Weather Co.