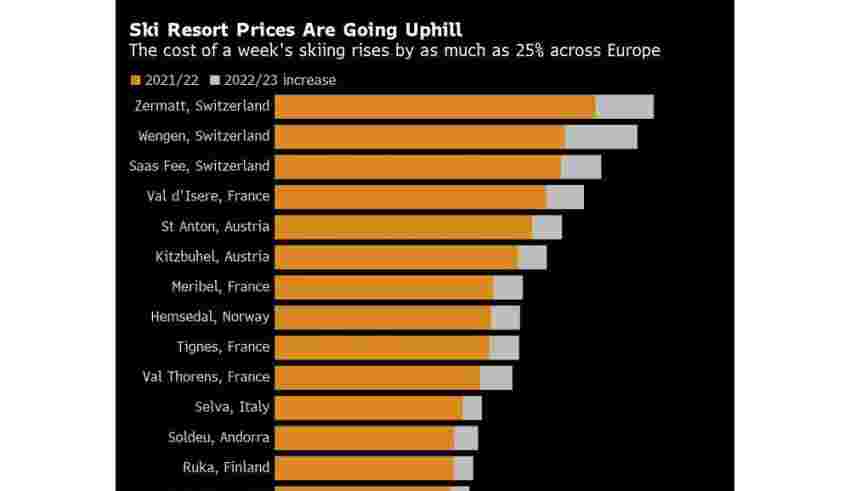 (Bloomberg) — More than 20 of Europe’s leading ski resorts have raised prices by at least 10% for this winter, adding to the challenges facing British snow-lovers after two seasons badly impacted by Covid-19.

Europe’s energy crisis means skiing now will be colder, slower and more expensive, while strikes in Britain mean even getting to and from resorts will be a challenge for many aiming to travel over Christmas.

In the Alps, the French resort of Avoriaz has hiked ski pass prices for the first time in two years. In Val Thorens, another French destination, ski-lift heating now automatically shuts off when doors are open. Lifts in Saas-Fee, Switzerland, are running more slowly to save energy.

Prices are up across Europe. A week in the high-end Swiss resort of Zermatt, including lift passes, ski lessons, equipment hire and meals now costs £1,367 ($1,662) per person, 25% more than last year, according to data from Post Office Travel Money and Crystal Ski Holidays. In France, Val Thorens and Meribel have hiked prices by about 15%. Bansko in Bulgaria is about half as expensive as Zermatt, still costlier than a year ago.

Travel was already hit by flight cancelations due to snow falls and cold weather earlier this month. Seven days of walkouts by UK Border Force officials, plus Network Rail strikes affecting Eurostar trips over Christmas, threaten to disrupt travel to and from the UK for the rest of December.

Nevertheless, UK ski holiday bookings were 35% higher by the end of November compared to 2019, previously the best-ever year for bookings, according to SNO, a tour operator. Demand is high even though the weak pound, Europe’s energy crisis and concern over climate change mean packages are about 25% more expensive compared to pre-pandemic levels.

“Inflation has definitely increased the cost,” said Richard Sinclair, chief executive officer at SNO. “But skiers are a passionate lot for whom the annual ski trip is the one non-negotiable holiday.”

Demand for ski holidays is still strong in Europe, too, with people shortening trips to save money rather than skipping skiing altogether, according to a recent survey of 3,000 people conducted for winter tourism business associations in Austria, Germany and Switzerland.

Much of the UK enthusiasm is thanks to groups of holidaymakers who booked early in 2022 after the pandemic derailed their plans two years in a row, locking in prices before the cost-of-living crisis took hold.

That enthusiasm started to fade when former Prime Minister Liz Truss’s “mini budget” crashed the pound and sent interest rates higher, raising holiday costs for new bookers, according to Palumbo. The pound recently pared back some of its losses against the euro, but remains below the €1.17 one-year average. It’s worse for those planning to ski in Switzerland, where Swiss franc-denominated prices are 10% more expensive in pound terms this season versus last winter.

Currency uncertainty has driven a rise in all-inclusive holiday packages, allowing travelers to lock in their budget. The share of all-inclusive bookings spiked to 30% this season, up from only 10% before the pandemic, according to SNO.

Nevertheless, many will still be priced out of skiing this year. Wasteland Travel, which operates holidays for groups of students and young professionals, said demand is 10% below expectations.

I think the bigger effect that we are seeing is not cost increases, it’s consumer confidence,” Palumbo said, adding that for others economic concerns may well play a role after this season. “I think we will see the full effect in next year’s bookings,” Palumbo said.

—With assistance from Bryce Baschuk and Marton Eder.