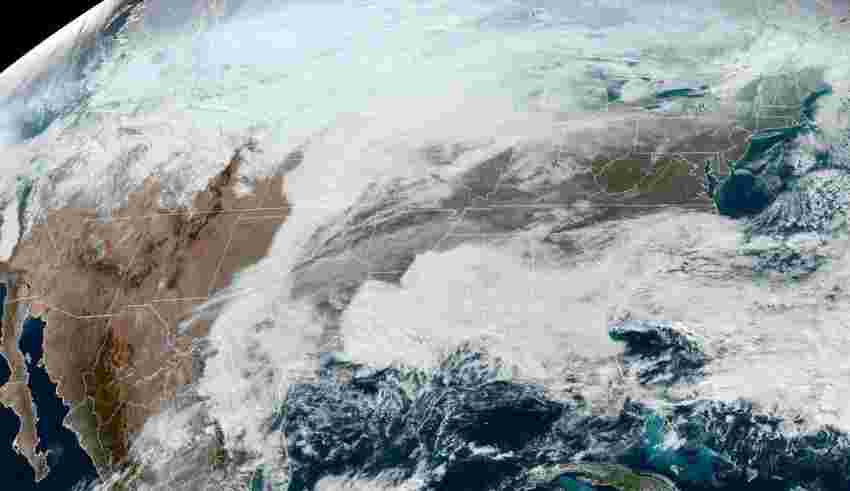 NEW YORK (AP) — An arctic blast is bringing extreme cold, heavy snow and intense wind across much of the U.S. this week — just in time for the holidays.

The weather system, which may build into a “bomb cyclone,” is expected to move east in the week leading up to Christmas, disrupting travel and causing hazardous winter conditions. Where is this winter weather coming from, and what’s in store for the coming days?

A front of cold air is moving down from the Arctic, sending temperatures plunging.

Much of the U.S. will see below-average temperatures through the middle and end of the week, said Bob Oravec, lead forecaster for the National Weather Service in College Park, Maryland.

Temperatures may drop by more than 20 degrees Fahrenheit (11 degrees Celsius) in just a few hours, the National Weather Service predicts.

And with winds also expected to pick up, wind chill temperatures could drop to dangerous lows far below zero — enough to cause frostbite within minutes. In parts of the Plains, the wind chill could dip as low as minus 70 degrees Fahrenheit (minus 57 Celsius).

On top of the frigid cold, the weather system is expected to send a snowstorm through the Midwest near the end of the week.

Those in the Plains, the Upper Midwest and the Great Lakes should expect blizzard conditions as heavy winds whip up the snow, according to the National Weather Service.

WHO WILL BE AFFECTED?

Pretty much everyone east of the Rockies — around two-thirds of the country — will see extreme weather in the coming days, said Ryan Maue, a private meteorologist in the Atlanta area.

Though much of the West Coast will be shielded from the cold, the Arctic front is expected to pass east and south all the way through Florida.

As for the snow, those in the Midwest will probably see a “heck of a storm,” though blizzard conditions aren’t expected to hit the East Coast, Maue said. Some spots around the Great Lakes may see upwards of a foot of snow by Friday, the National Weather Service predicted.

Heavy snowfall and intense winds could be bad news for travel, Oravec said. Airports in the Midwest, including the travel hub of Chicago, will likely face shutdowns as the blizzard comes through later in the week.

And for those planning to hit the road for the holidays, “you’re going to have pretty serious whiteout conditions,” Maue cautioned.

HOW LONG WILL IT LAST?

The cold isn’t going to stick around for long. After the dramatic plunge that will keep temperatures low for about a week, “everything will snap back to normal,” Cohen said.

Shortly after Christmas, temperatures will start to warm up again, moving from west to east. The are likely to remain near normal through the end of the year in most of the U.S.

WHY IS THIS HAPPENING?

It all started farther north, as frigid air collected over the snow-covered ground in the Arctic, Maue said.

Then the jet stream — wobbling air currents in the middle and upper parts of the atmosphere — began pushing this cold pool down into the U.S.

As this arctic air is pushed into the warmer, moister air ahead of it, the system can quickly develop into serious weather — including what’s known as a “bomb cyclone,” a fast-developing storm in which atmospheric pressure falls very quickly over 24 hours.

These severe weather events usually form over bodies of water, which have lots of warmth and moisture to feed the storm, Maue said. But with the huge amount of cold air coming through, we could see a rare bomb cyclone forming over land.

Whether this storm technically qualifies as a bomb cyclone depends on how quickly the pressure drops — but either way, the snowfall plus high winds will make for an intense bout of winter weather.

The storm is definitely a strong one, but “not unheard of for the winter seasons,” Oravec said.

It’s pretty normal to have cold air build up in the winter. This week, though, shifts in the jet stream are pushing the air more to the southeast than usual, Oravec said — sweeping the freeze across the country and making storm conditions more intense.

The U.S. probably won’t reach record-breaking lows, like those seen in the cold snap of 1983 or the polar vortex of 2014, Maue said.

Still, “for most people alive, this will be a memorable, top-10 extreme cold event,” Maue said.

The Associated Press Health and Science Department receives support from the Howard Hughes Medical Institute’s Science and Educational Media Group. The AP is solely responsible for all content.