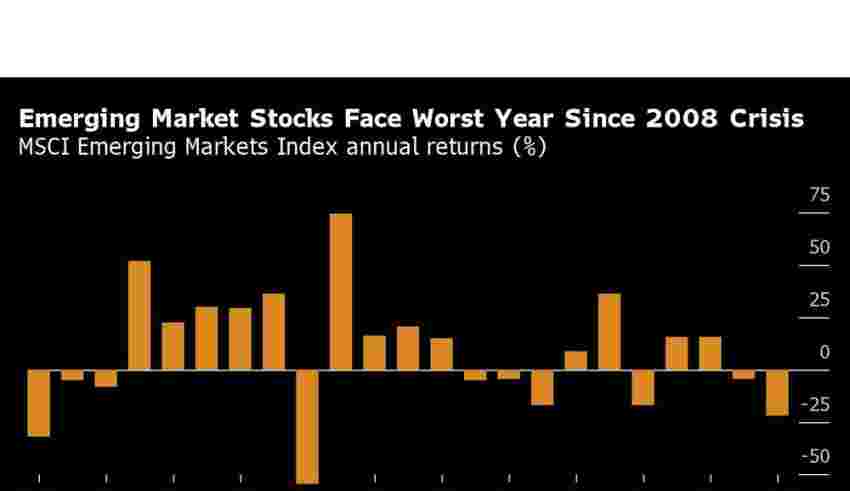 (Bloomberg) — After the worst year for globals stocks in more than a decade, and a rout in bonds that’s unmatched this century, some investors aren’t prepared to take anything for granted in 2023.

While optimists are betting on central banks pivoting to interest rate cuts, along with China fully emerging from its Covid isolation and conflict in Europe abating, others are on the lookout for risks that may throw markets back into turmoil.

Below are five scenarios that threaten to bring more trouble for investors in the year ahead.

“The bond market is expecting inflation will pretty neatly come back into zone in 12 months,” said Matthew McLennan, co-head of the global value team at First Eagle Investment Management.

But that may be a big mistake. There is a real risk that wages growth and supply-side pressures like elevated energy costs keep fueling consumer price gains, he said.

This would rule out the pivot to cuts from the Federal Reserve and European Central Bank that markets see coming in the middle of the year.

Then there’s the question of higher borrowing costs triggering a recession and how that plays out for investors, according to McLennan.

“The Fed didn’t see inflation coming and in their quest to fight inflation may not see a financial accident coming,” he said. “It’s quite possible the Fed is underestimating the risk of financial catastrophe.”

Chinese stocks have jumped about 35% from their October nadir on the prospect of the world’s second-biggest economy fully reopening from lengthy and draconian lockdowns.

Weighing against this optimism is the danger of the health system being overwhelmed as infections surge, and economic activity collapsing. Crowded hospitals and queues at funeral parlors have caused alarm in recent weeks, and been accompanied with a drop off in social mobility in major cities.

“China’s infection curve will rise and will only peak one or two months after Chinese New Year,” said Marcella Chow, global market strategist for JPMorgan Chase.

She expects the nation to succeed in reopening but still cautions of “risk in terms of how Covid evolves.”

The rebound in Chinese equities remains fragile and any prospect of stumbling in economic activity would sap demand in commodity markets, particular for industrial metals and iron ore.

“If the war worsened and if NATO became more directly involved in hostilities and sanctions ratcheted up, it would be quite negative,” said John Vail, chief global market strategist for Nikko Asset Management.

Secondary sanctions against Russian trading partners, notably India and China, would amplify the effect of current restrictions at a perilous moment for the global economy, according to Vail.

“That would be a major supply shock for the world in terms of food, energy and other items like fertilizer, certain metals and chemicals,” he said.

An even more alarming scenario would be the use of a tactical nuclear weapon by a Russia — a threat that appears distant but within the realms of possibility. That could end Ukraine’s agriculture exports in one fell swoop.

Many investors see dollar strength easing in 2023 and energy costs falling — two factors that would relieve pressure on emerging markets.

Any failure to curb inflation would scuttle this outcome for currency markets, while an intensification of the war in Ukraine is just one of many risks that could send energy prices skyrocketing again.

“We may well go through another year where emerging markets struggle,” said Shane Oliver, head of investment strategy and economics for AMP Services Ltd. “A still-high or possibly rising US dollar would work against emerging market countries because many have US dollar denominated debt.”

The pain from this scenario would be particularly acute for emerging-market governments that would have to bear an even heavier burden of debt raised in dollars.

A more contagious or deadly strain of Covid-19, or even the present variants lingering longer, could begin to jam up supply chains once more, which would ripple on into inflation and slow economic activity.

“We believe the macro hit to growth would be most felt by larger economies and those more dependent on trade,” said JPMorgan’s Chow.

For now, she’s betting that the virus will continue to recede and expects negativity in markets to be focused more on investors pricing in recession in the US and Europe.

—With assistance from April Ma.