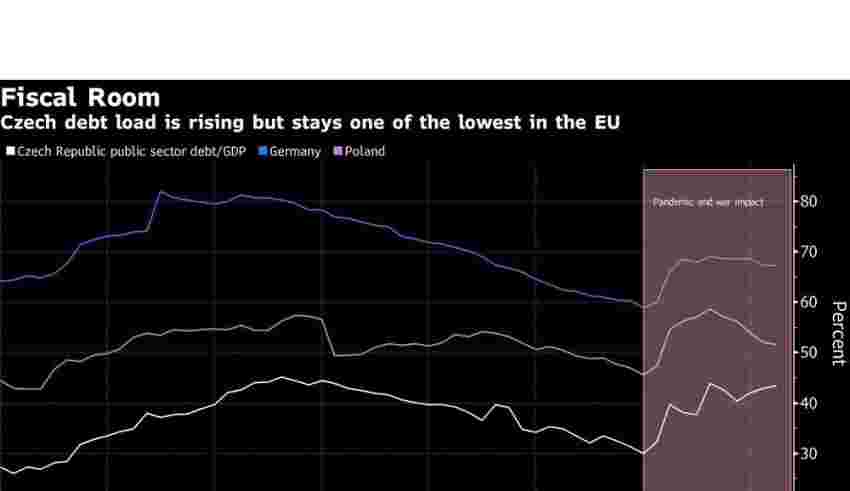 A country rocked by protests over Ukraine has discovered a way to counter pro-Moscow propaganda: Throw money at people’s economic worries.

A cash injection amounting to $8.5 billion in the Czech Republic effectively defused some of the European Union’s largest anti-government demonstrations. After 70,000 people thronged the streets of Prague at their peak in September, only several hundred attended a Nov. 26 rally.

The decision wasn’t an easy one for Prime Minister Petr Fiala. His party won power in 2021 on a pledge to cut spending — a longtime vote winner in a debt-averse nation — and had for months rejected the idea of blanket relief programs.

But with January presidential elections approaching and his party’s popularity sliding, his cabinet unleashed the stimulus worth about 3% of gross domestic product to shield people and companies from energy costs driven higher by Russia’s attack on Ukraine.

“The government’s measures to contain the energy crisis have eased economic anxiety and weakened the anti-establishment movement,” said Josef Mlejnek, a political scientist at Charles University in Prague.

The protests’ organizers, a mix of hardline nationalists, anti-vaxxers and other fringe politicians, had said the rallies were driven by anger over rising utility and grocery bills. But groups waving anti-EU banners and right-wing speakers from across Europe denouncing NATO underscored warnings from intelligence officials about the Kremlin’s efforts to divide society.

The protesters had called for talks with Moscow to secure fresh supplies of cheaper natural gas. They also attacked the Czechs’ support for some 400,000 Ukrainian refugees in the country, calling it a drain on public resources as the worst cost-of-living crisis in three decades unfolded.

Opinion polls show that the majority of Czechs support Ukraine. But the anti-government arguments resonated in the country of 10.5 million people, where officials frequently warn of a Greek-style debt crisis even though liabilities are among the lowest in the EU.

Fiala’s administration had little choice. It softened its push for fiscal tightening but also tempered the hit to the budget by imposing a special tax on energy companies and banks, and seizing windfall revenue of electricity producers, which protesters had accused of profiting from the war.

Now the government expects a budget shortfall of around 4% of GDP next year.

“The hybrid war always exploits topics that are causing concerns in the society, that have immediate impact on peoples’ lives,” Marketa Pekarova Adamova, the speaker of the Czech parliament, said in an interview last month. “We can’t say for sure that these efforts won’t intensify as we move closer to the presidential election.”

Moscow has spent more than $300 million to influence politicians and elections across the world, including in Europe, the US State Department said in September.

The Czechs have been fighting against that influence for years. They expelled more than 80 Russian diplomats in 2021, accusing former Soviet-era master Russia of operating a spy hub at its large embassy in Prague. The NATO member also blamed Putin’s agents for a deadly blast at a munitions warehouse.

Moscow rejected the accusation and retaliated by slashing the Czech diplomatic mission to skeleton staff and designated the country as an “unfriendly” state, alongside the US.

Czech police are investigating one of the protest leaders for alleged spreading of public fear with disinformation, the Idnes.cz website reported. Two other men were convicted of hate speech after posting anti-Ukrainian videos on YouTube.

The government is also preparing legislation that would give the state more powers to regulate website content it deems to be disinformation.

While Czech authorities haven’t exposed financial links between Russia and the protest leaders, the Interior Ministry described the largest of the rallies as promoting “pro-Kremlin propagandist narratives.”

Michal Koudelka, the head of the Czech counterespionage agency, said Russia remains “very active” in the Czech Republic in recent years. And one of its main objectives is to create social divisions to undermine efforts to punish Moscow for its actions.

“The one simple objective is to weaken the European governments that are supporting Ukraine,” he told a conference last month.