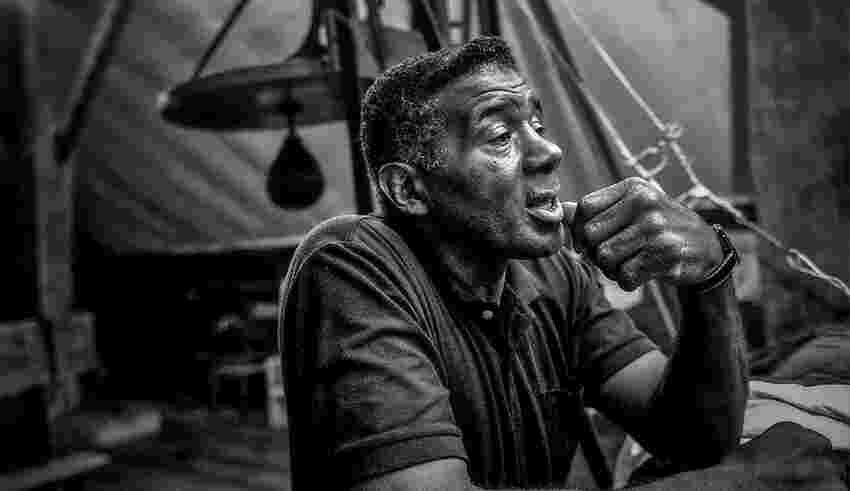 Born in Wasco, North Carolina, on January 4th, 1935, Floyd Patterson (55-8, 40 KO’s) was a light heavyweight-cruiserweight who competed with the Heavyweight division winning the Championship of the World on two occasions.

The former Olympic middleweight king who won his crown at the Helsinki Games in 1952 became the youngest professional ever to gain the top rung of the ladder. He is a fast-moving, clever heavyweight with a snappy punch, though his blows lack the steam of those Louis, Marciano and Dempsey could deliver.

Floyd Patterson had his ups and downs in his career, In the Eastern Golden Gloves tourney, he won a decision over Mike Zecca of the U.S Marines in the elimination. The next night he lay flat on his back after being put to sleep in the quarter-finals by Charley Williams of Buffalo.

He made his professional start after returning from his successful trip to Helsinki. His most important bouts prior to winning from Archie Moore, were those with Joey Maxim, in which the latter won an unpopular decision, the lone loss suffered by Floyd Patterson; his knockouts of Jimmy Slade and Wille Troy; and his twelve rounds victory over Jackson.

Floyd Patterson, who on August 30 1956, at 21 years, 10 months and 26 days became the youngest world heavyweight title champion, the successor to the throne left vacant by Marciano by knocking out Archie Moore.

In the fight with Moore, the panther-like son of a Brooklyn sanitation truck driver disposed of his opponent in 2:27 of the fifth round before a roaring gathering in the Chicago Stadium.

Floyd Patterson was piling up a load of the official scorecards against a wildly missing Moore when he crashed home a terrific left hook to the jaw. The blow had a delayed-action effect on the old warrior. He started to step forward then he spun and fell on his face. Moore barely beat the count of referee Frank Sikora.

As Moore wobbled, Patterson finished him off with another powerful left, sinking him to his haunches. Moore started to pull himself up, and just as he was getting to this feet, Sikora had completed the count.

In that contest, Floyd Patterson accomplished what had been expected. The 14,458 persons who paid $156,936 to see the affair witnessed about in which the defending titleholder was never in danger. Referee Ruby Goldstein halted it one minute and fifty-two seconds of the tenth round after a smashing left and right to the jaw had placed Jackson at the mercy of his opponent. Many protested the referee’s action, but he was justified.

Jackson was dropped in the first round as the bell sounded; went down for a count of two in the second, though the knockdown timer continued to toll of six; and was floored again in the ninth for a count of four,

It was the first independently promoted heavyweight championship bout in many years, with Emil Lence, a New York dress manufacturer, instead of the International Boxing Club, in charge. Jackson received $62.929, 81 for the lacing he took, and the champion, after agreeing to cut $50,000 off his guarantee to save Lence from losing heavily on the promotion, got $123, 859, 62.

Jackson started off well, but as the fight progressed he couldn’t defend himself. He absorbed terrific body clouts and man to the jaw. Though floored three times, he continued to display raw courage in his attempt to go the route.

Three days following that fight, Floyd Patterson went into training again, this time to face the world amateur champion, Peter Rademacher, Olympic titleholder in the latter’s debut as a professional, an unheard-of procedure. Boxing commissions throughout the world appealed to both Governor Rosselini of Washington and his commission to prevent the staging of the bout, but the appeal was vetoed.

The fight took place on August 22, 1957, at Seattle and the amateur title holder was knocked out, Tommy Loughran, the referee, counted off the doleful decimal.

The time was two minute and fifty-seven second of the sixth round, Rademacher had been sent to the canvas seven times.

The Olympic champion surprised by not only remaining in action so long following the pre-fight predictions that he would be lucky to last two rounds but winning the opening round and decking Patterson for a count of four in the second frame. Thereafter, however, he was never in the running.

Rademacher was down for nine in the third round, four times for nine in the fifth and once prior to the final count in the sixth round. Four-time referee Loughran faltered at the count of nine when he could have counted Peter out.

The history-making fight, the first time an amateur fought a professional heavyweight champion for the crown, brought out a gathering 16,961 persons for a record Northwest gate of $243,030 and a net of £209,556. Youth Unlimited which back Rademacher, lost close to $120,000 on the promotion.

Floyd Patterson made his second title defence in Los Angeles on August 18, 1958, against Roy Harris of Cut and Shoot, Texas.

After being decked in the second round, he battered the Texan into submission. Referee Mushy Callaghan halted the bout when Harris’ trainer, Bill Gore, told him that Roy could not come out for the twelfth.

On the rainy evening of June 26, 1959, 18,215 fans at the Yankee Stadium in New York watched 196-pound, 4-1 underdog Ingemar Johansson of Gothenburg, Sweden, win a knockout victory over 182-pound Floyd Patterson. Referee Ruby Goldstein halted the bout in 2:03 of the third round.

After two rounds of minor action, Johansson let loose a stunning right, his much-vaunted “Hammer of Thor,” which sent Floyd Patterson reeling and flat on his back.

Six more times Patterson went down. When he staggered up after the seventh knockdown, Goldstein stopped the fight. By scoring seven knockdowns in one round. Johansson had equalled the heavyweight-title-fight record set by Jack Dempsey against Luis Firpo in 1923.

In terms of the live gate, the fight was a financial failure for promoter William Rosensohn, but it grossed more than $1 million in closed-circuit telecasts. This was the dawning of an age when money was to be made, not from the live audience, but from TV.

When Floyd Patterson fought Ingamar Johansson for the second time at New York’s Polo Ground on June 22, 1960, Johansson faced a different fighter. A man who was looking, not for revenge, but rather for personal redemption from the humiliation he had suffered in losing his title.

A bigger, stronger, and restyled Patterson knocked out Johansson in 1:51 of in the fifth round. From the beginning, Floyd Patterson weighing 190 pounds was the aggressor, keeping the 194-pound defending champion off balance with a left jab and two-handed flurries. By the fourth round, Johansson was standing off balance, with his feet wide apart, but he kept boxing himself out of trouble.

Forty-nine seconds into the fifth round Patterson landed a blazing left hook to the jaw that sent Johansson down for a count of nine, on his feet again, Johansson tried to keep going. But a barrage of lefts and right and a final left hook caught Johansson’s chin and knocked him out cold.

A crowd of 31,892, who paid $824,814 and a closed-circuit TV audience of 500,000 who paid $2 million, were witnesses while Floyd Patterson reclaiming the heavyweight crown. Patterson accomplished what other heavyweight champions had attempted and failed to do.

A third Patterson-Johansson bout took place in Miami Beach on March 13, 1961. Patterson and Johansson were the heaviest in their careers at 194¾ pound and 206½ pound respectively.

Floyd Patterson retained his title by knocking out Johansson in 2:25 of the sixth round with a sharp left, then an overhand chopping right that struck Johansson high on the side of his head. Johansson started to get to his feet, and then pitched forward. He got up a split second after referee Bill Regan reached the count of ten. Replays confirmed the referee’s decision.

The fight was clumsily sporadic. What the crowd 13,984 spectators saw the bloody pounding of two fights out to annihilate each other, the scorecards of referee Bill Regan and judges Carl Gardner and Gus Jacobson all showed Patterson ahead in four of the five rounds before the knockout.

Johansson’s boxing career wasn’t quite over; he won back the European heavyweight title on June 17, 1962, by knocking out Dick Richardson. Then he retired in mid-1963 to devote his full time to the business.

Patterson’s last successful defence of his crown was against the strong, game, but woeful inexperienced Tom McNeeley, December 4, 1961, at Toronto. A crowd of 7,813 watched McNeeley hit the canvas ten times. Left to the jaw ended the fiasco in round four.

After two years of waiting in the number-one contender’s spot, Sonny Liston got his chance against Patterson September 25, 1962, in Chicago. At 212 pound Liston outweighed Patterson by 25 pounds and outreached him thirteen inches.

Sonny was in control from the beginning, pounding both hands to Patterson’s body and jabbing accurately. The end came when the second of two powerful lefts decked Patterson in 2:06 of the first round. The 18,894 fans were stunned at the speed with which the bout ended.

Liston had the honour of landing the third-fastest knock out in heavyweight history. The fastest was 1:28 credited to Tommy Burns in his match with Bill Squires, while Joe Louis scored the second-fastest when he dispatched Max Schmeling in 2:04 in their return bout.

Patterson was given a rematch on July 22, 1963, at Convention Hall in Las Vegas, with the odds 5-1 against him. Patterson attempted to become the first boxer to win the heavyweight title three times. Again Liston outweighed his opponent 215½ to 194½ and again Patterson could do little to retaliate for the torrent of powerful blows Liston delivered.

Counted out in 2:10 of the first round by referee Harry Krause, Patterson had landed only one substantial punch, a hard right to the jaw following his own first knockdown. Patterson was decked once more before the knockout, preceded by a flurry of right and lefts to his head. Liston’s left hook and crushing rights and lefts to his head.

Liston’s left hook and crushing right to the ribs set Patterson up for a right and left that crumbled the ex-champ.

Following those defeats, Floyd Patterson went through a period of depression. However, when he eventually recovered and he began winning fights again with victories over Eddie Machen and George Chuvalo.

Patterson became the number one challenger for the title then held by Muhammad Ali. On November 22, 1965, in yet another attempt to become the first fighter to win the world’s heavyweight title three times, but Patterson lost when Ali knocked Patterson out at the end of the 12th round in a bout in which Ali dominated.

In 1966 he travelled to England and knocked out British boxer Henry Cooper in just four rounds at Wembley Stadium. In comparison, Ali never scored a knockdown against Cooper in their two bouts.

Patterson lost a controversial 12-round decision to Jerry Quarry in 1967.

In a third and final attempt at winning the title a third time, Patterson lost a 15-round when the referee awarded the decision to Jimmy Ellis in Sweden despite breaking Ellis’ nose and scoring a disputed knockdown.

Patterson continued on defeating Oscar Bonavena in a close fight over ten rounds in early 1972. But final defeat by Muhammad Ali in a rematch for the North American Boxing Federation heavyweight title on September 20, 1972, convinced Patterson to retire at the age of 37. 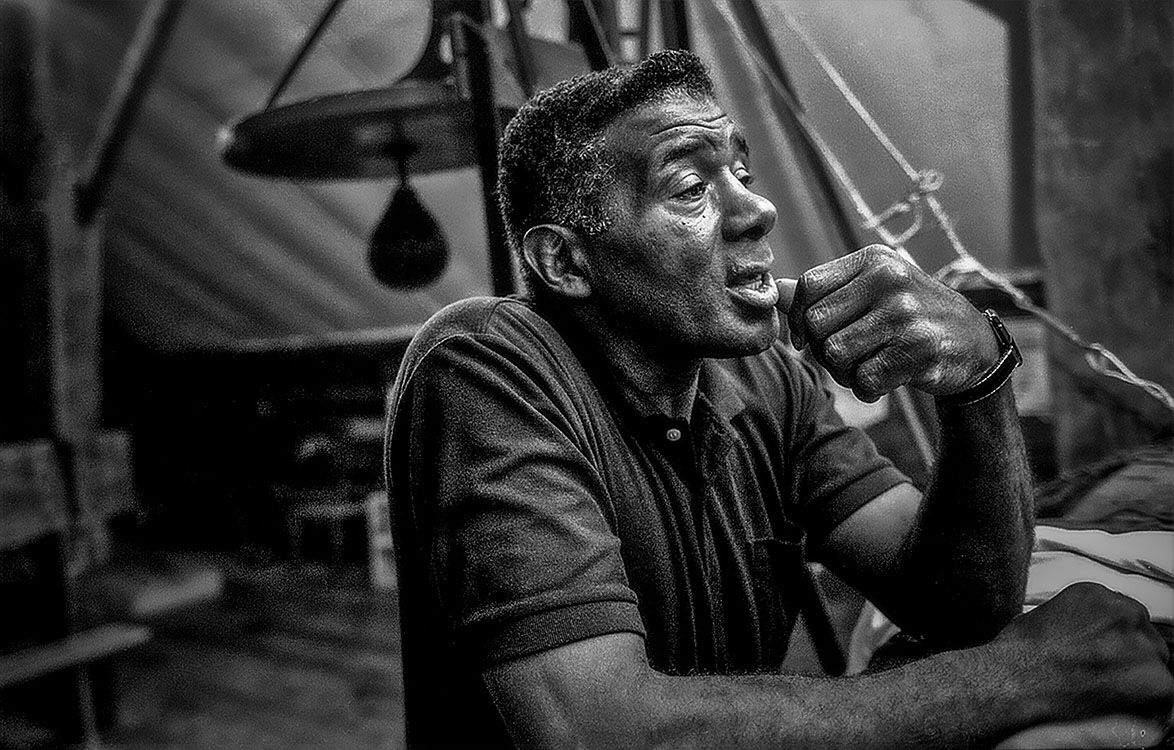