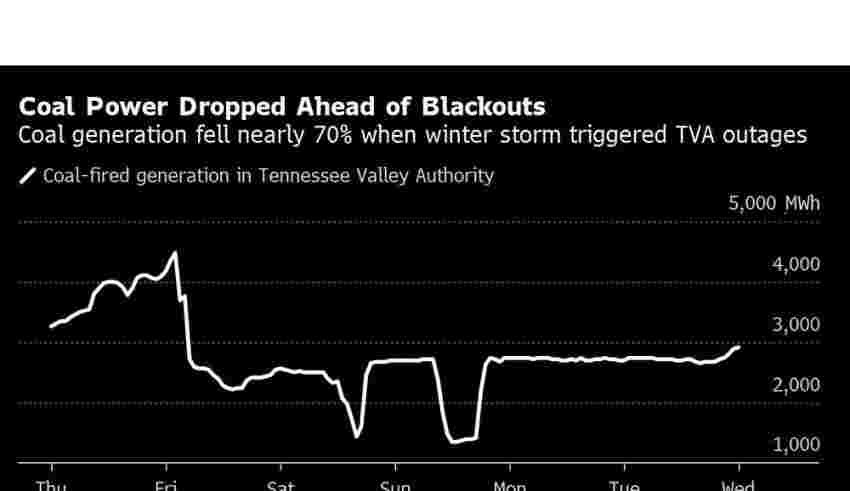 (Bloomberg) — Power plants that burn coal and natural gas to produce electricity had significant drops in generation as a winter storm hit the US Southeast, forcing blackouts that left hundreds of thousands in the dark.

Duke Energy Corp. and the Tennessee Valley Authority cut power to homes and businesses during the holiday season as an extreme winter storm pummeled the region. Duke instituted rotating outages Dec. 24 that interrupted service to about 500,000 customers, while TVA for the first time in its history had rotating blackouts Dec. 23 and Dec. 24.

The disruption was the latest instance of a major failure to generate electricity in the US following a storm or natural disaster, a trend that’s brought attention to the state of the nation’s energy infrastructure and its dependence on fossil fuels to keep the lights on even as the Biden administration advocates for a transition to renewable energy.

The failure of coal and gas highlights how even the power sources that have long served as the backbone of the US electrical grid can still falter, especially as the South sees its population increase and relies more on electric heat.

TVA saw power generation from coal plants drop about 68% from more than 4 gigawatts early Dec. 23 to a low of about 1.5 on Dec. 24, according to federal data. While gas generation increased Dec. 23, on Dec. 24 it fell roughly 25% from about 11.5 gigawatts to less than 9 as the utility ordered outages for almost six hours.

Duke also saw its gas generation drop off just when it was needed most, according to federal data. Generation from its plants fell about 42% from more than 6.6 gigawatts to a low of about 3.8 gigawatts on Dec. 24, the day it instituted outages.

The weather caused a reduction in Duke’s generation and extra electricity couldn’t be brought in from other power producers or from out of state because other utilities were also facing shortages, a Duke representative said in an email Thursday.