Home Business From Bad to Worse? Next Year’s Economic Risks Are Already Here 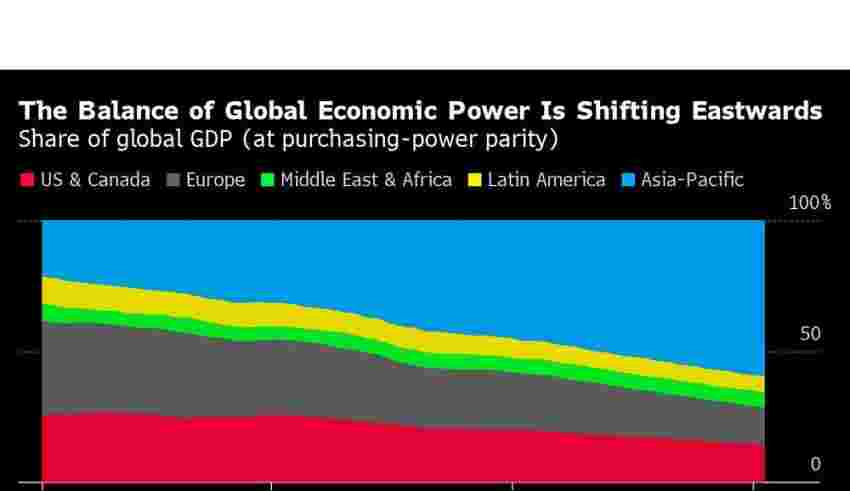 (Bloomberg) — It’s been a miserable year for the global economy. But things can always get worse.

History says the Federal Reserve’s high-speed interest-rate hikes may well tip the US into recession in 2023. Few will be surprised if spiraling natural-gas prices do the same for Europe. The double whammy of Covid Zero and a property slump threatens to bring China’s economy to a near standstill.

And in an extreme downside scenario, all those things happen at once. That could wipe out some $5 trillion in global output, compared with more upbeat forecasts at the start of this year, according to Bloomberg Economics.

The fact that such a gloomy outlook is far from implausible suggests that big things have gone wrong with the world economy. There’s been plenty of evidence of that in 2022.

Cheap money, supercharged demand from China, and low-friction geopolitics — ingredients of the secret sauce that delivered decades of mostly steady growth and stable prices — have all gone, leaving inflation at multi-decade highs and financial-market losses that run into the trillions.

There are positive surprises that could stop the rot next year. The Fed might pull off the fabled soft landing with the labor market proving resilient. Warm weather could spare Europe a recession. China may opt for an early exit from lockdowns. Some of those possibilities came into view last week, when markets rallied on lower-than-expected US inflation and indications of a Chinese pivot away from Covid Zero.

And even if those prove to be false dawns, investors who see a top for interest rates and a bottom for growth might start betting on the recovery to come. Still, after years marked by plague, war and scarcity, it’s tough to be optimistic.

Here’s a guide to the biggest economic risks for the year ahead.

The Great Rate Squeeze Is On

The Fed’s benchmark interest rate is poised to hit 5% in early 2023, up from zero at the start of this year. The most aggressive monetary tightening in decades is already hurting America’s economy, and the world’s. There’s more pain to come.

With higher borrowing costs hammering rate-sensitive industries from real-estate to autos, Bloomberg Economics is forecasting a US recession in the second half of 2023. More than 2 million Americans will likely lose their jobs.

Things could turn out better than that, if inflation disappears as quickly and mysteriously as it arrived. But it’s more likely they’ll turn out worse. The pandemic has thrown labor markets out of whack, pushing what economists call the natural rate of unemployment — the level of joblessness required to keep inflation under control — above where it’s been in recent years.

If that’s happened in the US, and Chair Jerome Powell says it’s a possibility, the Fed might have to raise rates as high as 6%, tipping the world’s biggest economy into a longer and deeper recession.

Terminal clients can use Bloomberg’s SHOK function to see how the US recession could be earlier and deeper.

The risk is replicated worldwide, since most countries share America’s inflation problem, and their central banks are taking the same path to fixing it. And economies trying to buck the trend don’t have a get-out-of-jail-free card. Japan has stuck with negative rates, but it’s paid a heavy price on currency markets, with the yen losing more than 15% of its dollar value.

Debt Risks Are Back

So long as growth rates were higher than borrowing costs, public debt came cheap. Governments piled it on. The total owed by the Group of Seven developed economies rose to 128% of GDP this year, from 81% in 2007.

Now, with economies slowing and interest rates rising, the calculus is shifting — and the bill is coming due. Several major economies could find themselves on an unsustainable debt trajectory unless they make painful fiscal adjustments.

In some emerging markets the dilemma is more acute. Sri Lanka has followed Lebanon and Zambia with an historic failure to pay. For now, at least, the problem appears contained.

Bloomberg Economics’ model suggests that imminent default risks are concentrated in small economies accounting for just 3% of global GDP, with the bigger developing countries likely to be spared a debt crisis.

Turkey might be an exception. An election in June will likely tempt President Recep Tayyip Erdogan to pursue even more unorthodox policies to stoke growth, with the lira — and maybe debt sustainability — paying the price.

Tight money means it’s crunch-time for housing markets across the world. Countries like Canada and New Zealand — which rank among the frothiest housing markets based on metrics like the price to income ratio — may find themselves on the front line.

The US isn’t at the top of the risk rankings, but it’s not far off. It will take a 15% drop in nationwide prices to bring mortgage payments into line with household incomes, Bloomberg Economics estimates.

For China, the base case is that reopening the economy after Covid Zero — a process that’s already begun and will likely gain momentum after the National People’s Congress in March — will offset the continued drag from real estate, with the net effect slightly stronger growth. Bloomberg Economics forecasts 5.7% for 2023.

Risks are tilted firmly to the downside. When — and how — the government will bring Covid Zero to an end remains unclear. Bloomberg Economics calculations suggest property construction has to drop 25% to realign with shrinking supply.

Failure on both these fronts could take Chinese growth all the way down to 2.2%. If property crash segues into financial crisis, even that number will be out of reach.

A slowdown that sharp would send shockwaves around the world. The biggest blow would fall on China’s Asian neighbors, from Korea to Vietnam, and major commodity producers like Australia and Brazil.

The final piece of the global risk puzzle is the world’s polarization into rival camps, which is already imposing steep costs on Europe.

Support for Ukraine after the Russian invasion has left the continent with natural-gas shortages and soaring power prices. Bloomberg Economics’ base case is that high energy costs and rate hikes by the European Central Bank will tip the bloc into recession, with GDP shrinking 0.1% in 2023.

With some luck (good weather) and skill (policies that channel scarce gas to the right places), Europe might dodge a downturn. Without either, the economy could tip into a contraction comparable to that seen in the global financial crisis.

Crude has dropped from a war-driven peak of close to $130 a barrel in the first half of this year. Some combination of new sanctions on Russia, reviving demand in China, and supply cuts from OPEC could push it back up next year, opening another front in the energy crisis — in Europe and beyond — and adding fuel to the inflation fire.

The standoff with Russia that’s left Europe short of energy is just one example of geopolitical fracture. Relations between the US and China also continue to deteriorate.

President Joe Biden has kept the tariffs imposed by his predecessor Donald Trump, and gone a step further with an embargo on sales of cutting-edge semiconductors — a move that threatens to turn China into a kind of Amish community, its technological development frozen in place.

Fracturing trade ties are a slow-burn drag on growth in both countries, with China paying the biggest price.

Taiwan is the flashpoint where slow-burn could turn into sudden blaze. The delicate balance that’s preserved peace across the strait now appears to be breaking down, along with trust between Washington and Beijing — largely because of China’s growing political and economic heft.

The consequences of a misstep could be extreme. Say the US overplays its hand with a step toward recognition of Taiwanese independence. China responds with a blockade of the island. The US and allies impose a blitz of sanctions. Even if conflict is avoided, Taiwan’s central role in the production of semiconductors — and China’s central role in the production of everything — could mean a supply-chain snarl to rival the worst of the Covid era.

Fortunately, military conflict remains a low probability. And for some countries, the growing rift between China and the US represents an opportunity. Apple’s decision to start production of the iPhone 14 in India is one sign that business giants are hedging their exposure to geopolitical risk. Countries like Vietnam and Mexico stand to benefit.

Other Things Could Go Wrong, Too — Or Right

Of course, there are risks that don’t fit neatly into any of these buckets.

A new, deadlier variant of Covid-19 would be a devastating blow. The recent floods in Pakistan — affecting 33 million people and tipping the economy into a steep contraction — show the impact of extreme weather events that are expected to become more frequent as global temperatures rise.

One potential upside, for financial assets at least, is that investors look forward. If they can discern a peak for Fed interest rates, and a bottom for Chinese growth, they might drive market rallies by betting on a brighter future — even if the present looks bleak.

Which, next year, it probably will.