Day Eight saw Nick Kyrgios attempting to reach a first Grand Slam singles quarter-final since 2015 when he opened play on Wimbledon’s Centre Court. Kyrgios faced American 20-year-old Brandon Nakashima in the fourth round, the 56th ranked player in the world is appearing at his second Wimbledon and has done a lot better than 2021 when he lost in the First Round, and he even described his opponent as one of his heroes growing up.

Kyrgios is ranked only 16 places above Nakashima in the world rankings, but many fancied the Aussie to progress to only his second ever Quarter Final at SW19, the last time being when he made his debut at the championships in 2014, but what would we get from Kyrgios this time around after his rather explosive match on Centre two nights ago?

It was a rather subdued Aussie if truth be told, maybe all of his aggression had been sucked out of him after his last match, and the American nabbed the first set 6-4, and then early on in the second set Kyrgios looked in trouble with shoulder/back pain, but the fastest working painkillers brought onto the court by a trainer worked wonders as the Aussie then took the second set 6-4, meaning the game was back on parity.

A third set, which saw Kyrgios have more massages from the trainer, ended with the Aussie winning it on a tiebreak, but the young American fought back to level at two sets all as a rather miserable-looking Kyrgios was simmering, but the Aussie has never lost a fiver setter at Wimbledon and he wasn’t about to lose this one either, charging through the decider 6-2 to finally see off Nakashima and reach the Quarters, let’s hope his body can hold up going forward.

Later on in the day two-time champion Rafael Nadal played the Netherlands’ Botic van de Zandschulp last on Centre, the Dutchman, who is the 21st seed at these championships, is making his second appearance at these championships and reached the 2nd round the only other time he played here last year, but this was going to be a very hard match against one of the greats, and one of his heroes growing up to as the Dutchman used to have a poster of Rafa on his bedroom wall, and now he was playing him on Centre Court at Wimbledon, how would he cope?

Not too bad to start with as he went toe to toe with him in the first set which went on serve for the first nine games, but at 4-5 Rafa grabbed break points and he duly converted the second one to take the first set, and just like that Rafa had the advantage, the Dutchman had a chance to maybe force momentum back his way when having break points, but Rafa held and then broke him in the very next game, and went onto seal the second set after van de Zandschulp served a double fault at the end of the set, and it looked as good as done at that point.

Rafa was not at his vintage best but he didn’t really have to be, as the Dutchman’s game had really dropped off after a decent start, he looked sluggish and maybe the win over Gasquet in Round Three had taken its toll on him, and although he did then break Rafa at the start of the third set, the Spaniard broke straight back and then at 5-2 up it looked odds on he was about to cruise to a straight-sets win.

But the Dutchman found something from nowhere and broke the Spaniard when he was serving for the match and before you knew it we were into a third set tie break, Rafa though never gets flustered though does he, and despite squandering three match points, he finally sealed the match, winning the tie break 8-6, and the 36-year-old took his place in the Wimbledon Quarters for the eighth time.

Completing the Centre Court line-up, Nadal’s compatriot Paula Badosa, was in action after Kyrgios, facing 2019 champion Simona Halep. The fourth seed is now the second-highest seed left in the women’s draw, but she was facing a Romanian who has also reached a semi-final in 2014 and a couple of quarter-finals in 2016 and 2017 and has bags of experience at these championships.

The Spaniard though did reach the fourth-round last year and was looking to go further this time around coming off the back of a quarter-final appearance at the French Open, she was in decent form, but the first set saw Halep take it 6-1 in just twenty-three minutes, nobody saw that coming that was for sure!!!

A tighter second set, well for the early part of it anyway, followed, but after Halep broke the Spaniard again at 3-2, the match was as good as done, and the Romanian saw it out after just an hour to seal a very emphatic win and send a message out to every lady in the women’s draw that she is right up there as one of the favourites for this title, she won it last time she was here, this is certainly a possibility this year for sure too.

Last on Court One, Harmony Tan took on 20th seed Amanda Anisimova, Tan has been in imperious form at these championships and must be considered as one of many women left in the draw at having a decent chance of going very far this year at SW19, but American Anismova is having her best run at Wimbledon at her third attempt and will certainly fancy reaching the Quarters herself, it certainly was an intriguing matchup.

And the American charged through the first set, winning it 6-2, leaving Tan in a position she had not found herself in this competition thus far, needing to find a way to come from behind to win. Still, today was not to be her day as she ran into a dominant Anismova who sealed a routine straights set victory, dropping only five games, to reach the Quarter Finals.

Before Tan and Anismova did battle there were two other games on Court One, 27th seed Elena Rybakina took on Croatia’s Petra Martic, the 80th world-ranked player was in the fourth round for the third time in her career and looking to go one step further in her ten appearances at SW19, but the seeded Kazakhstan player had already matched her fourth-round appearance in her debut at the championships last year, and is ranked 57 places above her opponent would have fancied her chances.

And it turned out to be a sumptuous performance from the Rybakina who edged a tight first set 7-5 before winning the second 6-3 to move into the Last Eight, one amazing stat was the 100% points won on the first serve by the 27th seed, that was very impressive, she will have bags of confidence as she heads into the Quarters Finals for the first time.

And following them on Court One saw the unseeded Aussie and world no.99 Jason Kubler took on American No.1 and 11th seed Taylor Fritz, Kubler lost in the First Round in his only other appearance at SW19 back in 2018, so this was a much better showing on the grass this time around, Fritz himself had not been past the fourth round at any slam so far, so a win here would certainly be a very good showing that’s for sure.

Kubler had three break points in the very first game, but Fritz managed to recover to hold and then went on to win the first set 6-3, and the Aussie then needed a medical timeout after that set, before the American then blasted through the second 6-1, cue another medical time out from the Aussie, whose body was still suffering from his five-setter against Jack Sock in the last round, his first one of his career.

And when Kubler went a break down in the third to be 1-3 behind, he looked done, but the Aussie summoned up one last ouch of energy to break back and participate in some incredible rallies, but Fritz was just too good and managed to break Kubler after a 14-minute game and take the match in straight sets, the American is looking good right now and faces Nadal in the Quarters, that could be some game.

There were two other games on Court Two as well, Chilean Cristian Garin, 43rd in the world, was up against 19th seed Aussie Alex de Minaur, Garin reached the fourth-round last year and was looking to go one better here at least, de Minaur was dumped out in Round One last year but is a much better player now and was looking to make only his second-ever grand slam Quarter Final, but after the Aussie blasted into a two-set lead, winning them 6-2 7-5, a straight-sets win looked likely.

But frustrated Chilean managed to win the third set on a tie break and then served out the fourth set at the second time of asking to win it 6-4 and take this epic match into a deciding set, and all the momentum was with Garin as he broke the Aussie in the very first game of the fifth set and was now in pole position to pull off a remarkable comeback win.

The Aussie broke straight back though, and a tense final set ensued, and Garin had to save two match points at 4-5 on his serve, and the game went to a championship tie break, which the Chilean took 10-6 to end one of the best matches at the tournament this year and complete a superb comeback and become only the fourth Chilean to reach a Quarter Final in the process, amazing!!!

And following them on Court Two was the battle of two unseeded players in the shape of French world no.37 Alize Cornet, conqueror of no.1 seed Swiatek, and Aussie world no.44 Ajla Tomljanovic. Cornet has tons of experience but has only been as far as the fourth round here in fourteen previous showings, the Aussie has only six previous appearances but did reach the Last Eight in 2021, could she equal that this year too?

Cornet has described herself as French wine, getting better with age, and after a set where she led 4-1, then 5-3, she finally managed to see it out by breaking the Aussie again to win it 6-4, but an increasingly irritated Frenchwomen then lost the second set 6-4, meaning the match would go to a deciding set, anyone with tickets on Court Two was certainly getting their monies worth today!!!

The deciding set turned out to be rather one-sided though, which was not expected, and it was Aussie Tomljanovic who charged through the decider, and although she lost her serve at 5-1, she managed to break the Cornet serve for one last time and see out the game 6-3 and take her place in the Last Eight. No doubt Cornet, who looked so good in the first set, will need one of those French wines to get over this loss.

Here is your quarter-final line up for both draws:-

So, eight remain, and over the next two days, four more from each draw will depart, leaving just four to battle it out to take their place in the weekend’s finals and have a chance of winning one of the most prestigious titles in the whole of tennis.

For today’s doubles and junior results, and tomorrow’s schedule of play, visit https://www.wimbledon.com/en_GB/scores/schedule/index.html and I’ll be back for Day Nine’s action tomorrow… 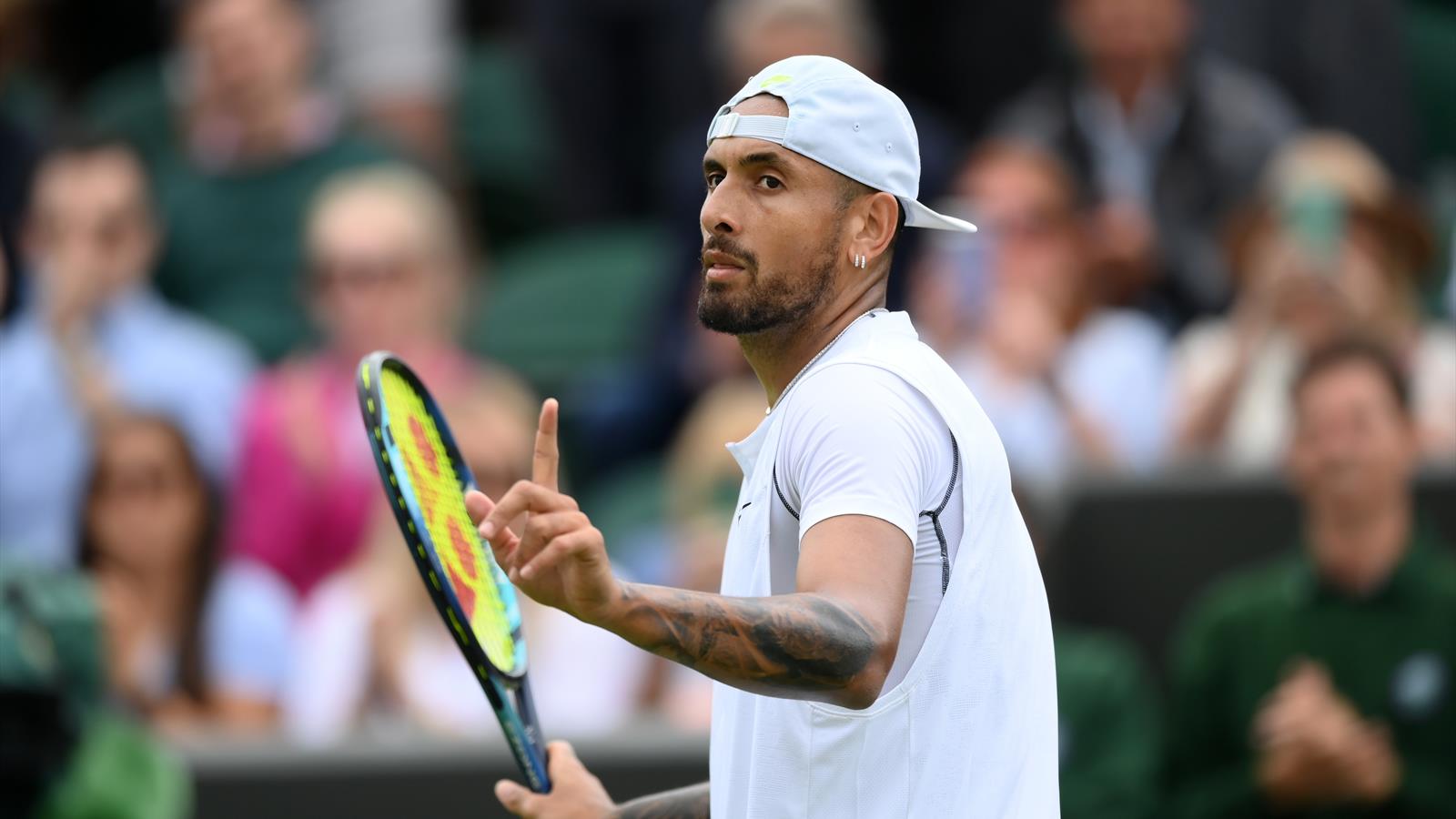