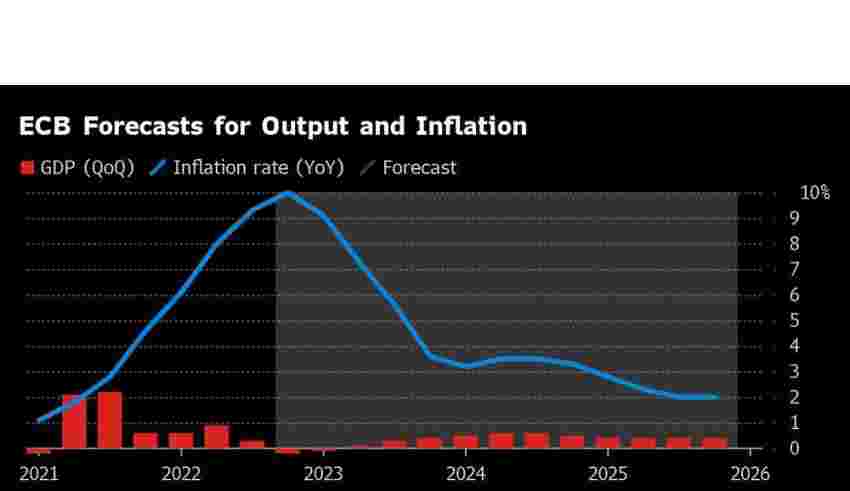 Cratering natural-gas prices thanks to warm winter weather are raising the odds that the euro zone’s inflation scourge will ease sooner than anticipated.

After a year when consumer prices consistently overshot predictions following Russia’s invasion of Ukraine, the bloc kicks off 2023 with the prospect of that dynamic reversing and with its near-term economic outlook brightening.

There’s even a chance headline inflation will reach the European Central Bank’s 2% target in the fourth quarter, rather than in 2025 as the institution forecast just a month ago, according to Joerg Angele, a senior economist at Bantleon in Zurich.

If gas prices stay where they are, “there’d be massive downward pressure on inflation” he said. With the ECB’s December assumptions way above current market levels, its next set of projections may well be revised lower.

The ECB “is off the mark again,” Angele said. “But this time in the other direction.”

The catch is that uncertainty about the path for gas prices remains high, even as optimism builds that the worst of Europe’s energy crisis is behind it.

Mild temperatures, more diversified supplies and efforts to cut consumption have eased much of the pressure unleashed when Russia attacked its neighbor almost a year ago. Gas inventories are far higher than the last five years’ average and prices have recently traded below pre-war levels.

German Economy Minister Robert Habeck said this month that the danger of “a complete economic meltdown” appears to have been averted. The rosier outlook marks an about-turn from just a few months ago, when it was feared the region would struggle to keep the lights on during the colder months.

Even so, much of the winter remains, and there are risks from any bouts of extreme weather or fresh supply disruptions. A cold snap is forecast for the region in the coming days.

There are also concerns that Europe could face an even tougher year ahead as it struggles to rebuild the gas inventories previously supplied by Russia, while China’s sudden Covid reopening could create more demand for liquefied natural gas.

“The impact of lower gas prices depends on whether they remain at these levels or whether its a temporary relaxation,” said Aila Mihr, an economist at Danske Bank in Copenhagen.

Such views were bolstered by data Friday showing that Germany’s economy probably avoided a contraction in the final three months of 2022.

Others, however, warn there’s a lot of pain still to come. While there’s a fairly direct link between wholesale gas prices and what consumers pay in countries like Italy and the Netherlands, Bantleon’s Angele says many households — renters in Germany, for instance — will still face with eye-watering heating bills this year.

Finance ministers across the region, meanwhile, may breathe a sigh of relief as the myriad support measures they agreed on last year look like being cheaper than feared. Economists at Berenberg have already lowered their forecast for the euro region’s 2023 fiscal deficit to 3.7% from 4.3%.

All of this is unlikely to make a big impression on ECB policymakers, who’ve lately emphasized their focus on underlying inflation that strips out volatile components like energy and food. That measure hit a record in December, with Chief Economist Philip Lane warning wage gains will keep it elevated.

“The latest inflation optimism in markets has maybe been a bit much and they focused too much on headline inflation,” Danske’s Mihr said. “Core inflation is still rising and it’s the key determinant for the ECB in the near term. I don’t think that the slowdown in energy inflation will make them more dovish in the near term.”