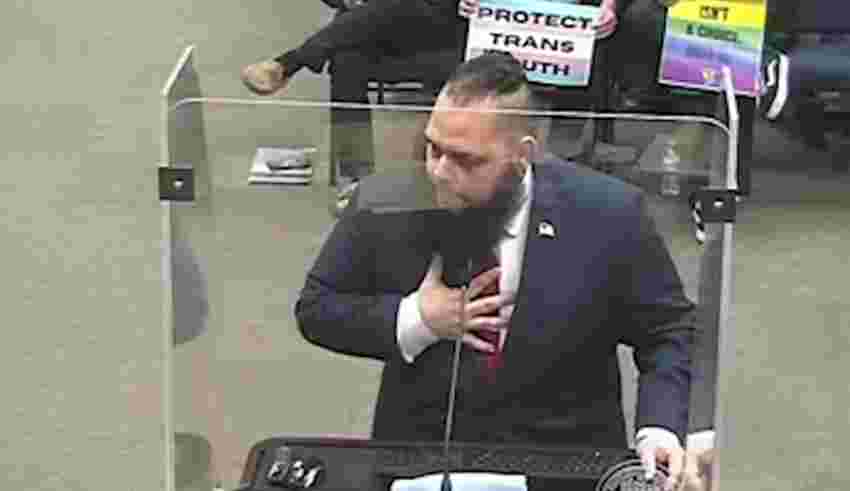 PORTSMOUTH, OH –  The liberal radical group of LGBTQ individuals and organized groups, extremists transgender activists, and gender ideology cult supporters and promotors DO NOT represent the majority of the LGBTQ community.

I have gay friends that are absolutely against the indoctrination, grooming, sexualization, and mutilation surgeries concerning children.

Gays Against Groomers is a coalition of gay people who “oppose the recent trend of indoctrinating, sexualizing and medicalizing children under the guise of LGBTQIA+.”

Our community that once preached love and acceptance of others has been hijacked by radical activists who are now pushing extreme concepts onto society, specifically targeting children in recent years. ​

The overwhelming majority of gay people are against what the community has transformed into, and we do not accept the political movement pushing their agenda in our name.

Gays Against Groomers directly opposes the sexualization and indoctrination of children. This includes drag queen story hours, drag shows involving children, the transitioning and medicalization of minors, and gender theory being taught in the classroom…The activists, backed by school boards, government, woke media, and corporations, have been speaking on our behalf for too long…There are millions of gays within the community that want nothing to do with this Alphabet religion and join the fight with parents and concerned people everywhere to protect children.

Sept. 2022, “BREAKING: After being banned by @PayPal and @Venmo less than 24 hours ago, We have JUST been banned by @Google! Big tech is coordinating a massive attack on our organization for trying to protect children. THIS IS INSANE.”

“Grooming” is defined by the Rape, Abuse, and Incest National Network (RAINN) [as manipulative behaviors that a sexual abuser “uses to gain access to a potential victim, coerce them to agree to the abuse, and reduce the risk of being caught. Grooming behaviors are not only used to gain a victim’s trust, but often are used to create a trustworthy image and relationship with their family and community.”

RAINN continues: “You should also talk to your kids about risks and boundaries, and make sure they know that they can come to you if anyone crosses a line.” (emphasis mine)

Folks, an adult male dressed in a thong or outlandish female attire that jerks and twerks as entertainment for children is crossing the line.

How do you teach safe body boundaries to kids when adults allow this type of indoctrination, grooming, and sexualization? Parents, teachers, librarians, and other adults are supposed to be trustworthy protectors and defenders of children not para-predators. Children are the victims of gender-bender drag queens predators promoted by parents, schools, libraries, and public venues such as Pride parades, festivals, and events.

Kids do not belong in bars, strip clubs, or at adult entertainment venues. Why would any sensible adult go against anti-grooming legislation that protects innocent children from child predators, pedophiles, and sex offenders?

The following video is a gut-wrenching testimony by a young adult female that was indoctrinated to accept trans surgery and later realized it was a mistake. Watch the video on YouTube: BlazeTV: Members of Gays Against Groomers speak to protect kids.

What doesn’t GLADD – the world’s largest Lesbian, Gay, Bisexual, Transgender and Queer (LGBTQ) media advocacy organization stand up for kids against the grooming and sexualization by drag queens and against mutilation surgeries for adolescents?

Folks, this is not a LGBTQ issue at all – this is about protecting our most vulnerable citizens. Some drag queens are heterosexual men with cross-dressing fetishes that like to twerk and dance in front of kids for sexual excitement. Not all drag queens are transgender. And DQs that entertain adults in adult places – no problem. But leave the children alone.

“It’s wrong to teach a kid that their gender is a choice,” proclaimed Gov. Ron Desantis. “And in the state of Florida that will not happen.”

I agree with Florida Gov. Ron Desantis. LGBTQ and Transgender indoctrination in schools (with or without parental consent) is anti-education. The purpose of a school or library is education – not indoctrination.

I agree with Gays Against Groomers and thank them to standing up for kids. Kudos.

We must unite and raise our voices to protect and defend our children from transgender groomers, predators, and pedophiles. And from mutilation surgeries and puberty hormone blockers.

We will never be silenced! Leave the children alone!