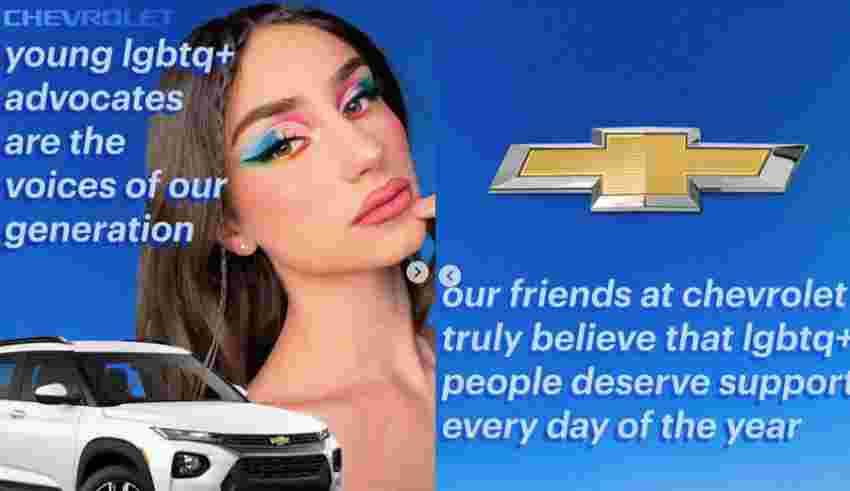 General Motors (GM), which owns Chevrolet, is singing to a different tune these days. The slogan used to be baseball, hotdogs, apple pie, and Chevrolet.

But now the company is catering to the transgender corruption crowd; the climate crisis hoax mob; and just as disturbing is their linear relationship with communist China.

According to Breitbart, General Motors provided a grant to the Gay Lesbian and Straight Education Network (GLSEN) to fund the organization’s “Rainbow Library” Program, according to the corporation’s 2021 Social Impact Report (page 6).

The automobile brand has invited LGBTQ influencers to participate in paid advertisement collaborations, like trans activist Madison Werner on instagram, who writes “our friends at Chevrolet truly believe lgbtq+ people deserve support every day of the year.”

What’s next? Pics of drag queen faces on Chevy trucks. Someone needs to tell GM there’s no science behind gender ideology. Read my lips – only two sexes: male and female.

As of April 2021, one of GM’s top individual shareholders is Mary Barra, the Chairman and Chief Executive Officer of General Motors.

Peruse the GM website for info on carbon emissions policies:

“The ESG gold standard is wokeness, climate alarmism, “diversity,” social justice, and more. The more ESG-conscious a company is, the more it embraces left-wing politics, globalism, the LGBT agenda, cancel culture, and everything associated with the Great Reset.”

Hmmm. Who is the founding fiend of the Great Reset? Megalomaniac Klaus Schwab.

Folks, read and reflect on the following info:

Barra is a member of the World Economic Forum.

Nov. 4, 2022 – World Economic Forum: The Alliance of CEO Climate Leaders’ open letter to COP27. “We, the Alliance of CEO Climate Leaders, are in this together to solve the climate crisis. We are ready to work side-by-side with governments to deliver bold climate action. We encourage all business leaders to set science-based targets to halve global emissions by 2030 and reach net zero by 2050 at the latest.”

Ironically, there is no climate crisis emergency – it’s a hoax.

For a  review on Klaus Schwab, founder of the World Economic Forum and the Great Reset (aka Fourth Industrial Revolution, New World Order) read a multitude of news articles at The New American. “More than two years after the now-infamous “Great Reset” was announced in June of 2020 at a virtual forum under the auspices of the World Economic Forum (WEF), the pieces are beginning to fall into place. Key leaders from the United Nations, the International Monetary Fund, the British monarchy, the Chinese Communist Party (CCP), and the WEF have all been working fiendishly on the agenda since they first unveiled it at the height of the Covid pandemic…At a macro level, the changes happening are as unprecedented, at least in the West, as they are rapid. Virtually all major institutions of power — governments, businesses, churches, religions, media, technology, education, advertising, and more — have openly lined up behind the agenda. There are various marketing terms to conceal it: “woke,” “Great Reset,” “sustainable,” “social justice,” “smart,” “Build Back Better,” “Green New Deal,” and so on. ”

“Is General Motors Now China Motors?” a 2012 article in The New American asks.

“The GM Scandal Is Worse Than You Think,” is the headline for a 2014 article in The Federalist. GM announced it “was recalling over a million vehicles that had sudden loss of electric power steering. This, after recalling nearly 3 million vehicles for ignition-switch problems that the company knew about since 2001 and are now linked 13 deaths.”

GM and the Far Past

General Motors grew along with the American economy in the 1950s and ’60s and continued to hold 40–45 percent of total U.S. automotive sales.

“Oh and there we were, all in one place
A generation lost in space, with no time left to start again
So come on, Jack be nimble, Jack be quick
Jack Flash sat on a candlestick ’cause fire is the devil’s only friend
And as I watched him on the stage, my hands were clenched in fists of rage
No angel born in hell could break that Satan’s spell
And as the flames climbed high into the night to light the sacrificial rite
I saw Satan laughing with delight the day the music died.”

Jerry Osborne, in a 2017 column for Courier & Press interpreted the above lyrics as the following:

“Many psychedelic music lovers were “all in one place” at the 1969 concert at Altamont, Calif. Most there were high (“lost in space”). In a huge brawl involving at least one motorcycle gang, a man was stabbed to death. The “angel born in Hell” may have been a Hell’s Angel, who provided some measure of security at Altamont. Seeing this misery, Satan (Mick Jagger) would be “laughing with delight.” “Jumping Jack Flash” is a Rolling Stones song (they headlined at Altamont). “No time left to start again” indicates things were totally out of control and that the innocence of the ’50s would never return.”

GM and the Future

“In recent years, General Motors has been expanding its manufacturing operations in China. As of 2019, the company has a total of 12 factories in the country. General Motors first entered the Chinese market in 1998, when it established a joint venture with Shanghai Automotive Industry Corporation (SAIC)…In 2019, GM announced plans to launch over 20 new and refreshed models in China by 2021.”

“In fact, GM now employs more workers in China than it does members of the United Auto Workers in the U.S.,” as reported by CBS News  in 2019.

“So bye bye Miss American Pie. Drove my Chevy to the levee but the levee was dry.”