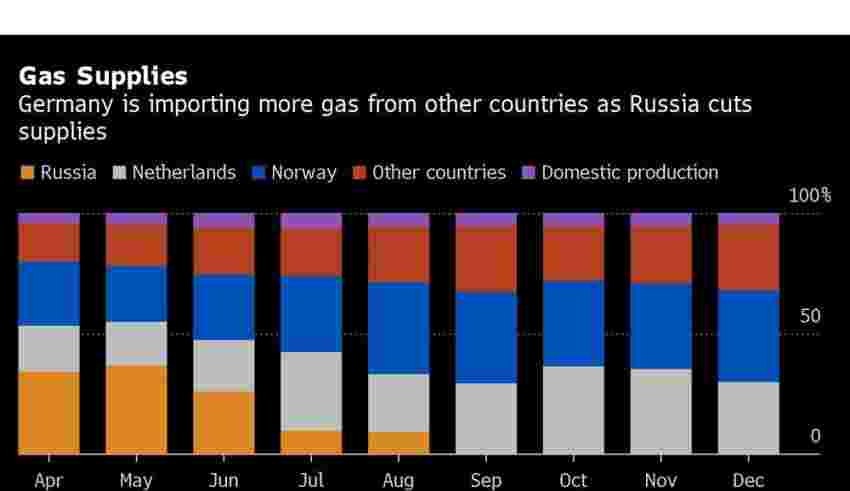 (Bloomberg) — Germany looks set to survive this winter without the Russian gas it used to depend on. The question now is whether it can plug the gap in coming winters, too — and at what price.

Europe’s largest economy hasn’t received Russian deliveries since September but is unlikely to face gas shortages in coming months — an impressive feat considering that, before the invasion of Ukraine, Germany depended on Moscow for 52% of its imports.

Rescue from potential rationing and forced blackouts came in the forms of liquefied natural gas, piped shipments from Norway and the Netherlands, and an old favorite: coal.

This full-on pivot — which may cost €46 billion ($50 billion) — is being helped by unexpectedly mild weather that’s keeping a lid on demand for heating.

Success in future years will depend on some fragile pillars.

Chancellor Olaf Scholz told Bloomberg this week that Germany learned its lesson from being too dependent on Russia. The goal now is to build capacity that gives Germany the chance to have as much gas as it had before the invasion without importing from Russia, he said.

But capacity is only half the battle: without long-term contracts, LNG buyers face fierce competition on international markets. And the amount of LNG available in the world isn’t expected to increase much for at least three years.

If China’s economy rebounds after loosening its Covid-19 restrictions, many volumes may no longer be available to Europe. A 15-year deal Germany signed with Qatar only equates to about 6% of Russian volumes in 2021.

“The biggest challenge for Germany in the next couple of years is attracting LNG as a base load source,” said Simone Turri, head of western European structured trading at Swiss energy trader MET International. “Building up LNG terminals without having new contracts coming in doesn’t solve the problem.”

Russia’s loss has been a big gain for Norway and the Netherlands, with gas exports from the latter two surging. Yet there already are warnings that the flush times won’t last.

Norway is now Germany’s largest supplier at 33% after almost tripling its total natural gas exports last year. Oslo expects flows to remain steady for the next four to five years but then gradually taper as supplies are drained.

The Netherlands tripled its monthly share of Germany’s imports by December, according to the energy lobby group BDEW. Most of that, though, was extracted from its key Groningen gas field, which is scheduled for shutdown by next year because production triggered hundreds of earthquakes.

“These countries have a limit on how much they can increase gas exports,” Turri said.

Temperatures in 2022 were 1.1C (2F) above the annual average of the last four years, the government said, with Berlin and other European cities setting records this winter. Last year also was one of the five hottest on record worldwide.

“The favorable weather conditions are currently playing into our hands,” said Timm Kehler, chairman of the German gas industry lobby group Zukunft Gas. “In normal years, the situation might be much more fragile.”

Warmer temperatures in colder climes, and vice versa, are linked to disruptions in the Polar vortex caused by climate change.

The dirtiest fossil fuel was once thought to be on its way out, but the current crisis brought it back to life. The government extended the use of mothballed coal-fired power plants until March 2024, sparking protests and potentially exacting a political cost for Scholz.

Germany is restoring enough coal to power about 5 million homes, according to Bloomberg estimates.

The nation generates more than a third of its electricity from coal. Energy giant RWE AG, which wants to triple its clean-energy capacity this decade, is still going ahead with plans to extract more lignite from a western mine.

“Germany will have to continue to use coal, with power plants at maximum capacity,” said Klaus-Dieter Borchardt, a senior energy adviser for Baker McKenzie. “There are not so many alternatives to Russian gas.”