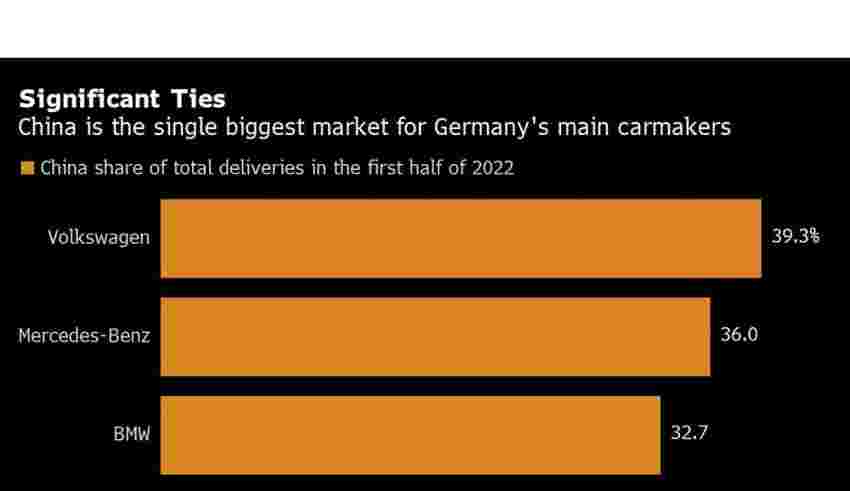 (Bloomberg) — German Chancellor Olaf Scholz and his deputy Robert Habeck head to South East Asia with dozens of top executives this weekend as part of a new push to diversify commercial ties in the region and dilute a deep-rooted reliance on China.

The ruling coalition in Berlin is stepping up efforts to develop alternative markets for Europe’s biggest economy and Scholz and Habeck are taking separate corporate delegations — expected to include the chief executives of companies like Siemens AG, BASF AG and Deutsche Bank AG — to Vietnam and Singapore before the chancellor heads to Indonesia for the Group of 20 summit.

Russia’s invasion of Ukraine was a wakeup call for Germany and other European governments, and they are reevaluating potential risks in their trading relationships with China. The government in Beijing has refrained from openly criticizing President Vladimir Putin and has displayed an increasingly aggressive stance toward Taiwan, stoking fears that lopsided dependence on the world’s biggest exporter for goods and raw materials could leave nations over-exposed.

“The aim is to position ourselves more broadly, spread risks, develop our own strengths and become more robust, and thus also politically more free to act,” Habeck said Friday before flying out of Berlin.

Both Scholz and Habeck, who is also the economy minister, will speak at the 17th Asia-Pacific Conference of German Business in Singapore, which begins on Sunday. Scholz will also stop in Vietnam on the way there for talks with his Vietnamese counterpart.

South East Asia has a huge potential customer base but has traditionally been a difficult market to crack for German manufacturers. Import barriers make the shipping of goods there relatively expensive and there is fierce competition from Japanese manufacturers in the electronics, machinery and automotive sectors.

Scholz and Habeck will be lobbying for investments worth billions of euros in Germany’s energy transformation and want to enlist Singapore’s sovereign wealth funds to help accelerate the shift toward renewable energies, according to German government officials, who asked not to be identified in line with briefing rules.

Habeck will spend three days in Singapore and has scheduled meetings with the trade ministers of Indonesia, Pakistan and the Philippines, as well as with various government officials from the host country.

He has been a driving force behind the ruling coalition’s more critical view of China together with his Greens party colleague Annalena Baerbock, the foreign minister.

The period when the government waved through investments and takeovers is over, Habeck said Wednesday after Scholz’s cabinet blocked the sale of chipmaking assets to two Chinese state-owned companies.

German executives have acknowledged the need to diversify their business in Asia, but also worry that going too far in resetting relations with China could trigger a loss of business that could not be compensated for elsewhere.

“It would certainly not be an option to renounce China completely,” Volker Treier, head of foreign trade at the DIHK lobby in Berlin, said in interview. “Rather, German businesses are trying to diversify and guard themselves against the possibility of a stronger decline in trade relations with China.”

No other Asian economy, not even India, would be able to replace Chinese business in the medium term, Treier said. “But as a whole, they could at least dampen a potential negative development.”

—With assistance from Petra Sorge.