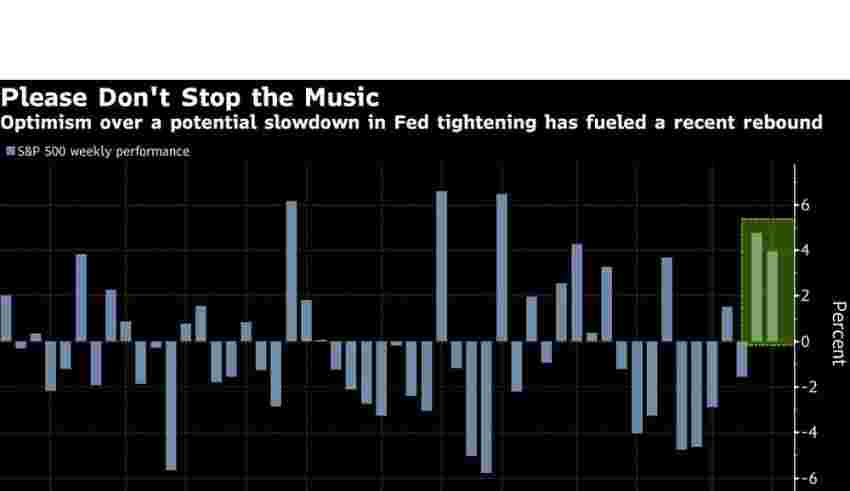 A shift in tone from the European Central Bank, fading fiscal stress in the UK and a slowing pace of interest-rate hikes in Canada and Australia boost optimism that the global tightening cycle could end by early 2023, the JPMorgan chief global markets strategist and his team wrote in a note to clients. US monetary policymakers will likely raise rates by 50 basis points in December and pause after one more 25 basis-point hike in the first quarter of next year, the strategists said.

This doesn’t mean global central bankers will let up on their inflation fights, the strategists warn. Consumer-price pressures need to continue declining for this scenario to play out, they wrote, although some of it is already apparent. The ECB signaled that it’s making progress battling record inflation as it doubled its key interest rate. And Mary Daly, who heads the San Francisco Federal Reserve, said earlier this month that the central bank should start planning to reduce the size of its rate increases.

“If our forecast is right, the most synchronized and aggressive global hiking cycle in 40 years will end by early next year,” JPMorgan strategists including Kolanovic wrote in the note. “An important support for risk markets arose from signals that the pace of central bank tightening has peaked and that any further rate hikes from here will likely be smaller in size.”

The Fed is widely expected to raise interest rates by 75 basis points for a fourth consecutive time when its meeting ends on Nov. 2. Investors will be closely parsing Chair Jerome Powell’s commentary for guidance on future moves. The outlook for the meetings to follow is less certain, with traders seeing a coin toss between a 75- and a 50-basis-point boost in December.

Kolanovic’s comments echo those of Morgan Stanley’s chief US equity strategist Michael Wilson. Indicators like the inversion of the curve between 10-year and three-month Treasury yields “support a Fed pivot sooner rather than later,” wrote Wilson, who until recently was a well-known bear.

The comment from Wilson, who was ranked the best portfolio strategist in the latest Institutional Investor survey, comes as Goldman Sachs Group Inc. strategists said that the potential slowdown in the pace of rate hikes coupled with light investor positioning and the anticipation of strong fourth-quarter seasonality are behind a two-week, 8.9% rebound in the S&P 500.

More gains could be on the way if policymakers turn dovish when they announce their interest-decision on Wednesday, estimates made by JPMorgan’s trading desk show. The S&P 500 could surge at least 10% in one day if the central bank raises interest rates by a slower-than-expected half of a percentage point, according to the bank’s sales team including Andrew Tyler.

The S&P 500 is down 0.7% on Monday, paring its October advance, as big tech stocks slump and bond yields climb.

—With assistance from Farah Elbahrawy and Lu Wang.