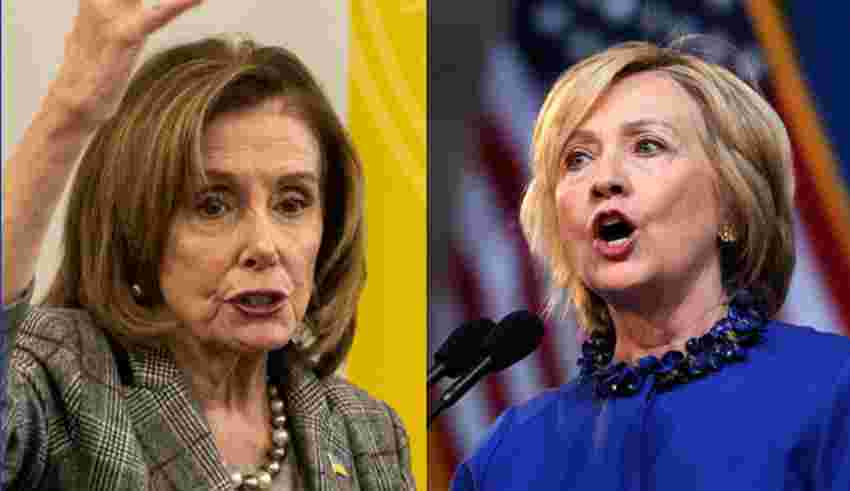 PORTSMOUTH, OH –  This is a mega difficult decision. They’re both from the Liarsaurus species. Both are married to mythomaniac morons. But no ties allowed.

Democrat rat Pelosi is the 52nd Speaker of the House of Representatives, having made history in 2007 when elected as the first woman to serve as Speaker of the House. For 35 years, Speaker Pelosi has represented San Francisco, California’s 12th District, in Congress.

Huh? Fox News notes that Pelosi told French President Emmanuel Macron that she crushes a hotdog every day on Capitol Hill. “Macron and his wife reportedly appeared puzzled at the comment.” Who in the heck cares about what’s on her lunch menu? Argh.

Pelosi showed up on “RuPaul’s Drag Race All Stars” and proclaimed drag queens are “what America is all about” as she crackled for the camera. Ugh.

Fancy Nancy’s latest lie involved her hubby, a homeless hippie, and a hammer. A giant whopper was fed to the mainstream media mob and her lefty liberal loons. And then there’s the insider trading deals.

Peruse 16 of Hillary Clinton’s Most Controversial Statements at PBS.

“Although there is a plethora of wrongdoings by Hillary Clinton, we could enumerate that alternate between the offensive, the immoral, and the hypocritical, we are going to provide a more concise list of the most patently criminal acts Hillary Clinton has committed during her political career. The media has tried to label these crimes “conspiracies,” but they are all the truth, and nothing but the truth,” according to America First website.

Hildebeast has lied for her serial sex-addicted spouse for decades. This gives her an edge over Nancy.

The deceptive diva distorters are neck-n-neck in this contest of fiendish falsifiers.

But I do believe the Russian collusion fabrication tips the scale. The vicious victor is Hillary Liarpants.

What does Hildebeast win?

The following would make a lovely prize for Hillary – a signed copy by President Trump. “Game of Thorns: The Inside Story of Hillary Clinton’s Failed Campaign and Donald Trump’s Winning Strategy,” by Doug Wead.

A weekend trip to Mar-o-Lago with her friends. Uh, cancel that prize – she has no friends. Let’s substitute a one-way ticket to planet Jupiter.

A lifetime supply of ‘LIARS R US’ tee-shirts. She can share with Slick Willy.

Congratulations to the Lying Lips lunatic.