Google’s Pixel 7 and 7 Pro are right around the corner, and while most are focused on those devices, some leakers are dredging up details about other upcoming Pixels. The latest: Google will use China-based Foxconn to manufacture two Pixel phones, possibly a foldable and another device made of ceramic.

The information comes from leaker ‘Digital Chat Station’ on Weibo, who details some of the specs of the ceramic phone (but not the foldable). Foxconn is the same company that manufactures the iPhone and has manufactured Google’s Pixel flagships since the Pixel 3 — the Pixel 1 and 2 were HTC and LG (for the 2 XL only). Google’s lower-cost A-series are manufactured in Vietnam.

Digital Chat Station describes the ceramic phone as a “Pixel flagship” with a 2K “flexible screen” sporting a centred selfie camera and a 50-megapixel primary camera and periscope camera on the back, plus a Sony IMX787 “sub-camera.” Moreover, the phone would sport Google’s second-gen Tensor chip and a ceramic body. 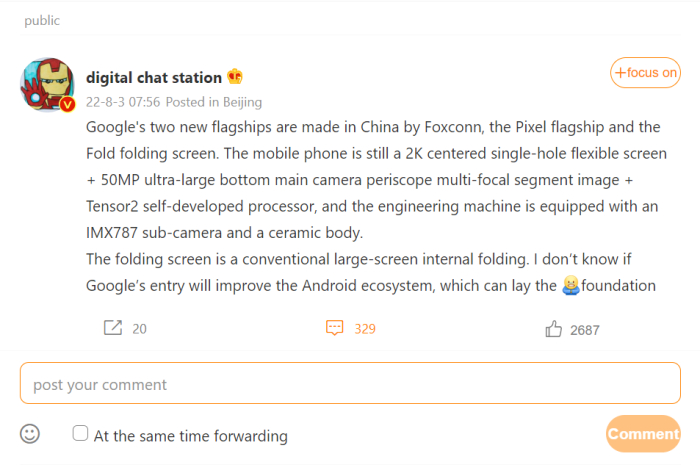 From what we already know about Google’s upcoming Pixel 7 series, the device described by Digital Chat Station doesn’t sound like any of these. 9to5Google says the camera details line up with previous leaks about a Google device with codename ‘Lynx,’ rumoured to be either a high-end third Pixel device (perhaps the Pixel Ultra people have dreamed about for years). Others suggested Lynx could be a prototype for testing new hardware before bringing it into the Pixel line, but bringing manufacturing to Foxconn suggests it could see a public release.

As for the Pixel foldable, Digital Chat Station described it as having a “conventional large-screen internal folding” screen, which isn’t particularly new information. Previous rumours suggested the foldable, possibly called ‘Pixel Notepad,’ would work similar to Samsung’s Galaxy Fold but use Google’s old 12-megapixel cameras like what was used in the Pixel 5 and 4. However, as 9to5 notes, the Pixel Notepad has been rumoured for so long that it’s hard to tell what’s accurate at this point.