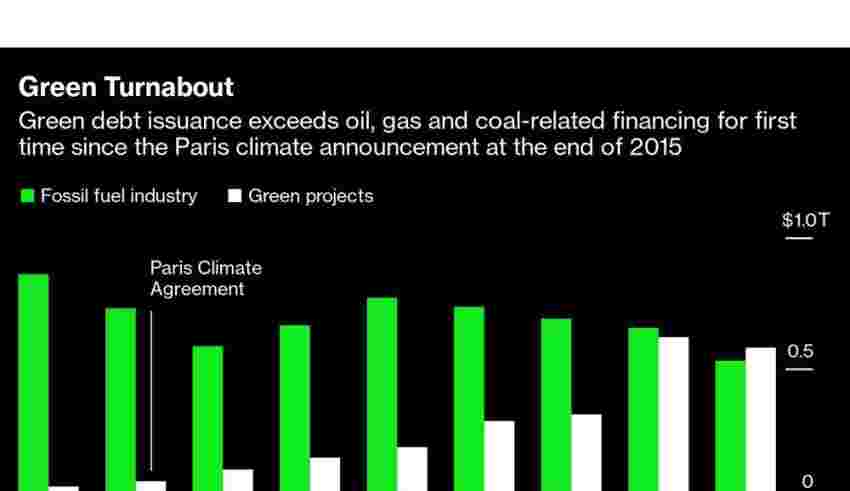 (Bloomberg) — For the first time, more money was raised in the debt markets for climate-friendly projects than for fossil-fuel companies.

Roughly $580 billion was arranged in 2022 for renewable energy and other environmentally responsible ventures, while the oil, gas and coal industries turned to lenders and underwriters for closer to $530 billion, according to data compiled by Bloomberg.

But it’s not that green financing is finally winning out over fossil fuel lending. Rather, Big Oil looks to be getting more money from elsewhere. High oil prices over the past year have likely freed energy companies from their dependence on capital markets, said April Merleaux, research manager at the environmental nonprofit Rainforest Action Network.

“We’re also seeing fossil-fuel companies turn to less traditional sources of capital, such as private equity, which is much harder for us to track,” Merleaux said. Given this backdrop, “it’s difficult to say with confidence that there’s a new trend in the lending markets that will extend into 2023.”

The big question for oil, gas and coal companies is how they plan to use their balance sheets to make the transition to clean energy, Merleaux said. Currently, many are saying they plan to expand fossil-fuel production now and decarbonize later, she said.

“This is false logic, and it isn’t what the International Energy Agency (IEA) recommends,” she said. As for the banks, “they know what needs to be done, but we don’t yet see evidence that they’re really ready to follow through on their emissions-reduction objectives.”

Bankers are generating considerably more revenue these days from selling green bonds and loans. In 2022, they pocketed an estimated $3.3 billion of fees from these deals, exceeding the $2.5 billion earned from lining up bonds and loans for the highest-polluting energy sectors, Bloomberg data show.

Credit Agricole SA, BNP Paribas SA and Bank of America Corp. ranked as the top arrangers of green bonds and loans last year, according to Bloomberg data, while RBC Capital Markets, Wells Fargo & Co. and JPMorgan Chase & Co. were the leading providers to the fossil-fuel industry.

However, if one looks at the bigger picture, Wall Street and its brethren clearly remain dedicated to funding the companies most responsible for global warming. Since the Paris climate agreement was announced in 2015, banks have raised almost $4.6 trillion for oil, gas and coal companies—double the $2.3 trillion gathered from green loans and bond sales.

But those Big Oil banks—including JPMorgan—say they have climate ambitions, and they’re expanding. Last month, the New York-based bank announced new emissions-reduction targets for airlines, cement manufacturers and iron ore and steel companies. That adds to JPMorgan’s first set of goals, which focused on the oil and gas, electric power and auto manufacturing sectors.

JPMorgan said the six sectors now covered by its reduction goals account for the majority of global emissions. The new targets are intended to align with the IEA’s net zero by 2050 scenario, according to the bank.

Climate activists have had a mixed reaction to JPMorgan’s claims.

While the adoption of additional sectoral goals is “great to see,” JPMorgan’s oil and gas commitments have so far done “nothing to change its unwavering support” for the fossil-fuel industry, said Lucie Pinson, director of environmental nonprofit Reclaim Finance. “The jury is still out on the material impact of these new targets for cement and steel.”

Merleaux and others also have questioned JPMorgan’s decision to focus on reducing the carbon intensity of its financing portfolio rather than pledging to reduce absolute emissions. That jibes with a United Nations-appointed panel of experts that said companies and financial institutions should focus on cutting absolute emissions when setting net-zero goals.

JPMorgan has responded by saying that intensity-based metrics are the most “decision-useful way to evaluate clients progress against climate scenarios.”

—With assistance from Mathieu Benhamou.