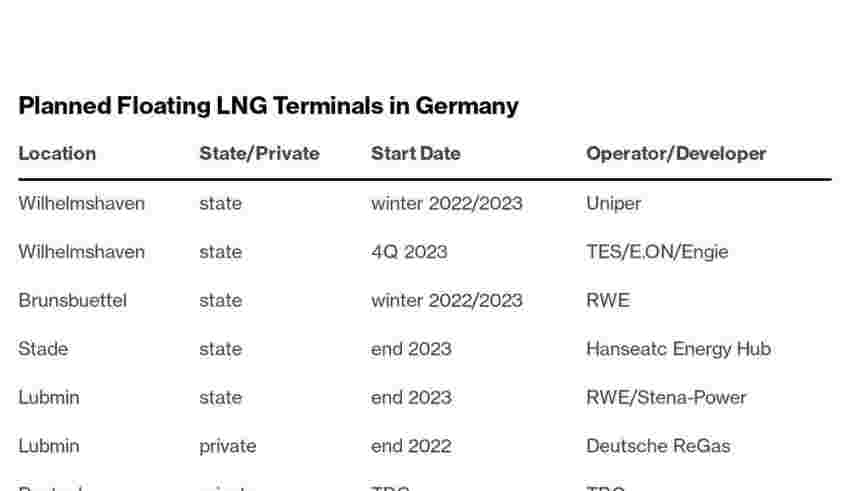 Germany’s plans to start imports of liquefied natural gas this month are at risk of being derailed by the weather.

Strong wind, freezing temperatures, high waves — or a combination — have already interrupted some works on its first terminals, and could delay some of the projects due to launch by the end of the year.

Three import sites whose works are more advanced are expected to add capacity for some 20 billion cubic meters per year of LNG — equivalent to more than 40% of the Russian gas that Germany imported in 2021. The longer these facilities take to become operational, the more exposed Germany will be in winter, when heating demand grows and extra supplies become necessary.

“There is one factor that is simply unpredictable for us now: the weather. That could be the key driver for a possible delay,” Uniper Chief Executive Officer Klaus-Dieter Maubach said this week, whose company is building an LNG terminal in the northwestern port of Wilhelmshaven. “But we are still confident that we can finish the construction of the project this year.”

Germany has rushed to build infrastructure to import more LNG and slash its dependence on Russian pipeline gas amid an unprecedented energy crunch. The government passed a law to accelerate the projects’ approval times and spent billions to charter import facilities. Companies have agreed with Berlin to arrange temporary supplies that will go through the new terminals.

LNG has been essential for Europe to fill gas storage sites and prepare for the winter. The continued arrival of cargoes from as far away as the US or Qatar at existing ports in Europe has driven gas prices down. But contracts are still four times higher than the average of the last five years and the terminals are congested, with the new German facilities expected to ease the strains.

However, unseasonably cold temperatures are expected across Germany in the next two weeks, weather forecasts show, and risk creating new challenges for the projects’ development.

The privately-run facility in Lubmin already faced delays due to harsh weather, according to its operator. While a floating terminal known as Neptune has recently reached the port of Mukran in Germany, taking it to its final destination in Lubmin will depend on the weather improving.

“The weather always plays a not insignificant role in an offshore project – especially during winter,” said Stephan Knabe, Chairman of the Supervisory Board of operator Deutsche ReGas GmbH & Co. KGaA. “This means that if the wind is too strong and the waves are too high, works on the ship — even in the port of Mukran — cannot be carried out and Neptune cannot be transferred to the port of destination in Lubmin either.”

The project — with capacity of 5.2 billion cubic meters — was first planned to start in the beginning of December. The necessary components and all the infrastructure requirements are now ready, but Deutsche ReGas says that “further delays cannot be ruled out.”