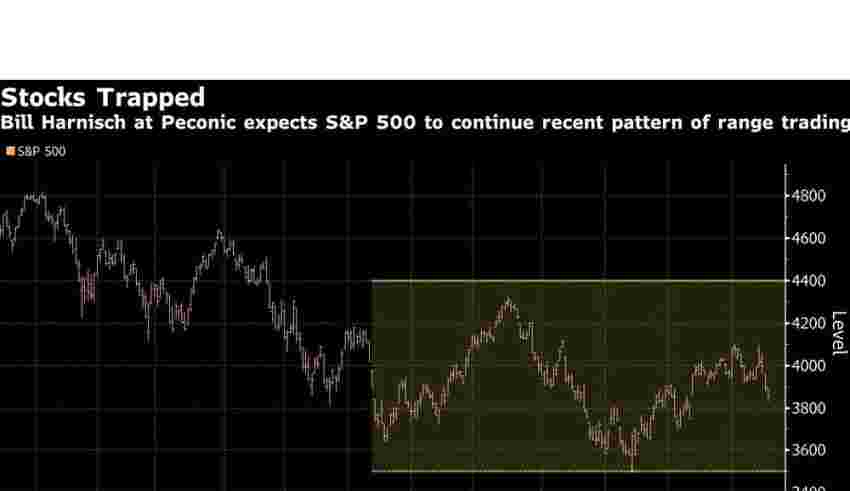 (Bloomberg) — Hedge fund manager Bill Harnisch, who has scored a 29% return this year, credits most of the success to a prescient call on inflation 15 months ago. If his take on consumer prices turns out to be correct again, stocks may go nowhere in coming years.

The chief investment officer at Peconic Partners expects persistent pricing pressures to force the hands of the Federal Reserve in 2023, upsetting any hopes for a pivot. Stocks may rally periodically, he says, only to fade when reality sets in that rates will stay higher for longer, earnings are poised to fall and equities are far from cheap.

“Rates will be sticky. And with the S&P at 19 times earnings, it’s going to be tough for the index to be doing much,” Harnisch, who began his career in the financial industry in 1968, said in an interview. “It’s going to be a pretty broad trading range.”

The manager’s record stands out at a time when many stock pickers have failed to deliver amid a violent selloff and dramatic shift in market leadership. Over the past three years, Peconic has returned 43% annually, compared with a gain of 9% in the S&P 500 over the same period.

Peconic, which started in 2004, has a team of a dozen to discover companies that will expand faster than the economy in the long run. These stocks, the kernel of its portfolios, are usually held for seven to eight years. On the short side, the team builds hedges to offset the risk from the core holdings while looking for mispriced shares.

With the specter of a recession on the horizon, Harnisch prefers companies whose revenues and profits will continue to increase regardless of how bad the economy goes. Businesses that offer that kind of resilience, he says, are those that tap into the ever rising demand for things like high-speed internet and clean energy — areas where the government also plans to spend billions of dollars to promote growth.

Peconic counts power-line builder Quanta Services Inc. and Wesco International Inc., a distributor of electrical gear, among its top holdings on the long side. Shares of Quanta are up 25% this year, while Wesco has lost 9%. Both are ahead of the S&P 500, which is down 19%.

“The people on the ground like Quanta, Wesco — they’re not looking at a recession,” Harnisch said. “When you add up everything that is taking place, the industrial space is not so much the soft landing story as much as it is what’s happening to these companies and why they’re not seeing a slowdown. It’s a tsunami.”

The seed for a winning year was sown in September 2021, when Harnisch’s team spotted a spike in wage gains. While Fed officials largely dismissed inflation as transitory at that time, the money manager saw red flags that wage inflation would persist, forcing policy makers to reverse their zero-interest rate policy fairly soon.

His firm began doubling down on bearish wagers against tech firms and pandemic high-flyers including online retailers Carvana Co. and Wayfair Inc., shares that had surged either on Fed largesse or false hopes for a durable sales boom.

Those bets paid off handsomely as the central bank has rushed to raise rates at the fastest pace in a generation. Carvana and Wayfair have plunged more than 80% this year while the tech industry hosts some of 2022’s worst losers.

Now Peconic is targeting the next big short, such as cable-services providers, advertising firms and retailers. Harnisch wouldn’t identify specific names as his team is still in the process of building positions.

The way Harnisch sees it, optimism that stocks will go back to new highs in 2023 is premature. While Peconic is ready to ride bear-market bounces, as it did during the equity rally in October and November, the money manager expects a combination of weakening corporate profits and higher rates to put a cap on equities.

After boosting net leverage to 50% during the latest market recovery, the high end of its typical range, the firm started cutting stock exposure as the S&P 500 failed to pierce through the 4,100 level. As of Thursday, its leverage sat near 30%.

“With the tape the way it is, it’s starting to discount some of the earnings challenges,” Harnisch said. “We’re very comfortable pulling back now and seeing how low it goes.”