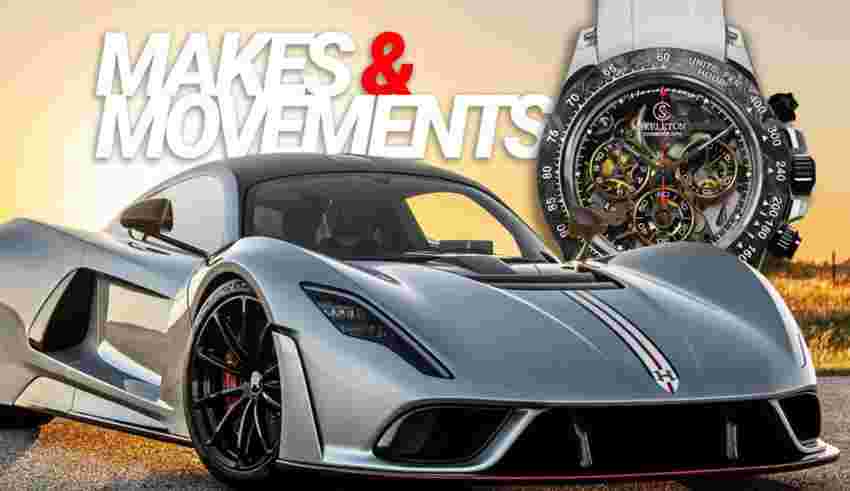 Exotic cars and fine handcrafted timepieces complement each other in a similar way that salt and pepper do. They just work. In many cases, watch manufacturers create pieces that tailor to the exotic automotive industry and even specific vehicles altogether. Makes and Movements will be selecting spectacular products available through duPont Registry and pairing them with current or pre-released watches. The diversity of both the vehicles and timepieces will shed light on different brands and help educated on new areas of each industry.

Showcasing its talents as a handcraft atelier with a focus on watch customization, Skeleton Concept shares similar values with the American tuning house professionals at Hennessey Performance Engineering. The art of modifying highlights the inner beauty of engineering and design, whether it comes from the luxury watch industry or the hypercar world. Since venturing from aftermarket upgrades to full-scale vehicle production with the Venom GT, Hennessey Special Vehicle is proud to continue its push to be the fastest American-made hypercar with the new Venom F5 platform. As an exclusive release with only 24 chassis in production, Skeleton Concept is proud to partner with Hennessey to create a line of bespoke watches to commemorate the astonishing capabilities of the Venom F5. Using characteristics from Hennessey’s hypercar development process, the Skeleton Concept Venom F5 Concept watch is the perfect accessory to pair with the 1,817 horsepower beast.

Made From Sapphire And Carbon Fiber

The new Hennessey Venom F5 Concept Chronograph boasts a case made out of a single optically-pure polished sapphire crystal. Starting as a factory Rolex Daytona, the ceramic bezel is replaced with a custom-fixed forged carbon bezel that displays an engraved tachymetric scale in white. A skeletonized dial offers a clear. A skeletonized dial design offers a clear view of the watch’s movement in action, similar to the see-through engine cover of the Hennessey Venom F5. Each sub-dial on the chronograph is reimagined using gold accents, drawing attention to its small-seconds, 30-minute counter, and 12-hour counter functions. Tracking lap times in the Venom F5 is even easier with quick-push crowns that operate the ability to track time within 1/8 of a second. This mirrors the steering wheel-mounted gear-shift paddles of the F5 that are similarly tactile and mechanical.

Delivering power to Hennessey’s first-ever vehicle-inspired watch is Rolex’s Caliber 4130, an in-house automatic movement that holds an impressive 72-hour power reserve. Each limited-edition timepiece is inscribed with an individual Venom F5 chassis number on its sapphire backcase, which additionally showcases a laser-etched Hennessey logo. The Hennessey Venom F5 chronograph comes equipped with an Oysterflex bracelet in the color of the car on which it is based. Priced at $200,000, just 24 examples of the new Hennessey Venom F5 Concept will be created.

Exclusively Designed To Match The Each Hennessey Venom F5

The new Skeleton Concept x Hennessey Venom F5 Concept is the next best addition to any watch collection because of its milestone mark as Hennessey Special Vehicle’s first-ever horological creation. Based on the American-made hypercar engineered to be the fastest on the planet, this watch holds significance between the watch and automotive industries. Lastly, each of the 24 examples produced will mimic the configuration of every Venom F5 hypercar that rolls off Hennessey’s production floor. The all-new Hennessey Venom F5 Concept is currently available by clicking on the link below.

Alongside modifying Cadillac, Chevrolet, Dodge, Ford, and Jeep models, Hennessey’s business model also compromises Hennessey Special Vehicles as a division that engineers hypercars from the ground up. The Texas-based auto manufacturer is most well-known for challenging other hypercar brands with its first Venom GT in 2014. Since then, the performance specialists went back to the drawing board to create a vehicle that truly differentiates itself from all other competitors in the market. The Venom F5 is an all-new hypercar designed and built with one goal in mind: To be the absolute fastest road car on earth.

On the inside the F5 proudly exhibits premium simplicity, promoting a driver-focused cabin layout that is similar to a pilot sitting in a fighter jet cockpit. The interior is true to the car’s roots displaying raw carbon fibre throughout, but with hints of luxury from leather panels on the doors, dashboard and seats. As the driver opens the F5’s butterfly door, they are greeted with a bespoke carbon fibre steering wheel, which is inspired by an airplane ‘yoke’ and an F1 racing car’s steering wheel. A pair of carbon fiber bucket seats secure the driver and passenger for the ride of a lifetime, while the cushioned leather inserts offer support during acceleration, braking, and cornering. The Venom F5 features state-of-the-art technology that not only delivers comfort and entertainment amenities, but also performance aspects that lets the driver select from Sport, Wet, Drag, Track, and F5 modes.

At the heart of the Venom F5 is the custom Hennessey-built 6.6-litre, twin-turbocharged, V8 engine dubbed “Fury.” The hand-assembled V8 utilizes precision components crafted from iron, aluminum, titanium, and Inconel. Under full boost, the engine develops a stratospheric 1,817 horsepower and packs 1,192 lb-ft of torque. Power is sent to the rear wheels through a 7-speed, single-clutch, automated gearbox. Deploying this unprecedented level of horsepower results in prodigious acceleration: 0-62 mph takes less than three seconds and the Venom F5 will smash a 0-124 mph run in under five seconds. The production F5 is targeting an independently validated top speed in excess of 500 km/h (311 mph).

Although the Hennessey Venom F5 has been sold out of its 24 chassis production since its original announcement, it proves to be the perfect addition to any garage because of its innovative approach to being the most powerful hypercar on the planet. Along with popularity and performance, each new owner holds the ability to personalize their configuration with an array of custom options offered by the creative team at Hennessey Special Vehicle. For those who were lucky enough to secure an allocation, they will be forever encapsulated in the history of Hennessey. Discover the new Hennessey Special Vehicle Venom F5 by clicking on the link below.