It feels like the cost of new smartphones is always going up. Sure, you can get a phone on a contract with your carrier to ease the cost, but you’ll just end up paying the cost of the phone (and more!) through monthly financing, bill tabs, or other expenses.

One sure-fire way to reduce the cost of your new smartphone is to trade in your old one. Most companies offer some kind of credit or discount for trading in an older phone, especially if it’s in good condition. Plus, it helps the environment by giving the phone a second life as a used device or by recycling the parts.

The thing is, it’s not always easy to know how much your old phone is worth before you get a new one. So, here are some of the ways to check your phone’s trade-in value before you buy.

Note that most companies offer an “estimated” value online that can vary based on the condition of your device. Some sites let you input details about the device’s condition to get a more accurate estimate. Either way, keep the condition of your phone in mind when checking trade-in values since you might not get the full amount.

Want to buy your new smartphone right from the source? Manufacturers often have trade-in programs and let you check your phone’s value online. Here’s how to do it with some popular phone makers: 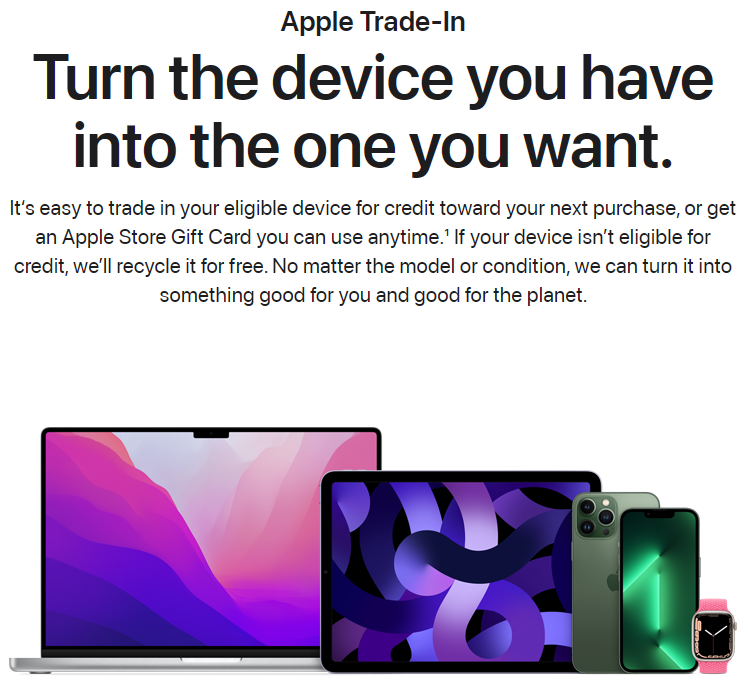 Apple lets customers trade in eligible devices for credit (or if Apple deems there’s no value for the device, it will recycle it for free). The tech giant’s website lists estimated trade-in values for several of its devices, although the bad news here is if you want to trade in a non-Apple device with Apple, the company won’t give you anything for it. Bummer.

Still, if you want to trade in your old iPhone, iPad, Mac, or Apple Watch, you can get decent value for it from Apple.

Samsung’s website asks customers to select the type of device they’re trading in and which Samsung device they want to purchase before listing trade-in values. For example, if you’ve got a phone to trade in, you can select ‘Smartphone,’ pick the new Galaxy device you want, and then select the exact smartphone you have from the drop-down list.

Samsung’s list includes a variety of devices, including Galaxy, iPhone, Pixel, and more. Unfortunately, it appears you can’t mix and match devices — i.e. if you have a tablet to trade in, you can only put it towards a Samsung Galaxy Tab, not a smartphone. 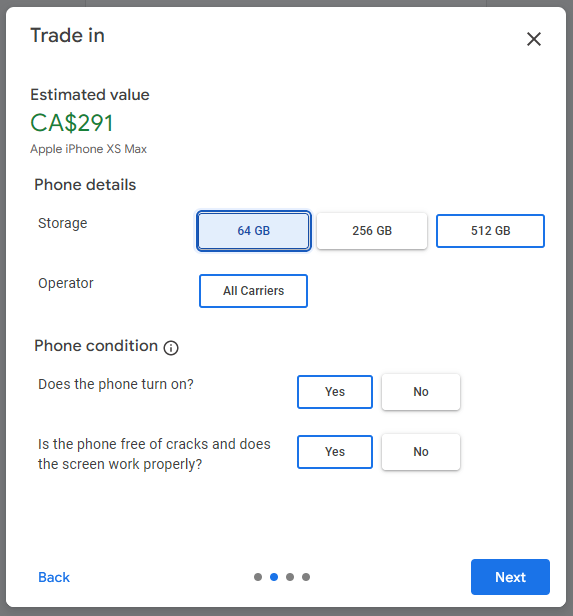 Google accepts Google, Samsung, and Apple devices for trade-in toward a new Pixel smartphone. The Google Store automatically asks customers if they want to trade in during the check-out process, but oddly the company makes you sign in with your Google account first before you can see estimated trade-in values for your old phone.

Once you sign in, you can choose a manufacturer and eligible device from the drop-down menus and then fill in some info about the device. For example, adding details like how much storage the phone has, whether it’s locked to a carrier, if it turns on and if it’s free of cracks and scratches can impact the estimated value you’ll get.

Google also has a whole page dedicated to explaining its trade-in process. Interestingly, Google’s trade-in page says it accepts devices from LG and Motorola as well, but neither showed up as options when I actually attempted a trade-in.

You can learn more here.

Some stores also offer trade-in programs and will take your old device in return for a gift card or store credit of some kind. Check out some of the options below:

Best Buy offers gift cards for a variety of tech products ranging from smartphones to laptops to even cameras and game consoles. You can select the item category you want to trade in on Best Buy’s website and receive an estimate of the gift card value you’ll receive.

It’s worth noting you’ll need to go into a Best Buy store to give them your device and get your gift card, but at least you can get an estimate of how much you’ll get online first.

The Source similarly offers a trade-in program that gives gift cards for old tech. While the store doesn’t offer as robust a value estimation tool as Best Buy, you can still get an idea how much you’ll get for smartphones, tablets, and more.

Most Canadian carriers or providers offer trade-in programs, along with online tools to estimate the trade-in value of a device. To keep things short, we’ve included a simple list of providers with trade-in options and links to respective trade-in pages or tools below.

That should cover all the major trade-in programs available in Canada. If we missed one you think is worth mentioning, let us know down below.