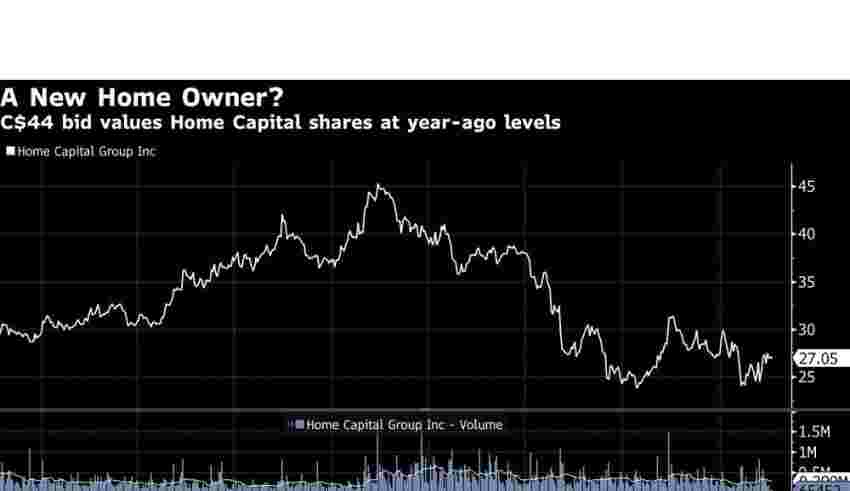 (Bloomberg) — Home Capital Group Inc., the Canadian mortgage lender that nearly collapsed five years ago and was bailed out by Berkshire Hathaway Inc., agreed to a C$1.7 billion ($1.3 billion) takeover by the co-founder of a rival financial firm.

Smith Financial Corp., the family holding company of First National Financial Corp. co-founder Stephen Smith, is offering C$44 a share, is a 63% premium to Home Capital’s closing price on Friday. The announcement comes three months after the company disclosed it had received an approach from an unidentified buyer that it rejected as too low.

The deal would mark a significant step-up in the financial-company holdings of Smith, who is still executive chairman of mortgage lender First National. Smith also has “significant equity positions” in other financial firms including Fairstone Bank of Canada, Guaranty Mortgage Insurance Co. and EQB Inc.

The offer for Home Capital comes after a 31% slide in its shares this year as rising interest rates cut sales and prices in Canada’s housing market, weighing on mortgage lenders.

The deal needs approval of two-thirds of Home Capital shareholders as well as regulatory approval. The agreement also includes a go-shop period until Dec. 30 and break fees of C$25 million and C$50 million, depending on when the deal is broken.

RBC Capital Markets is acting as financial adviser to Smith Financial, and Stikeman Elliott LLP is its legal adviser.