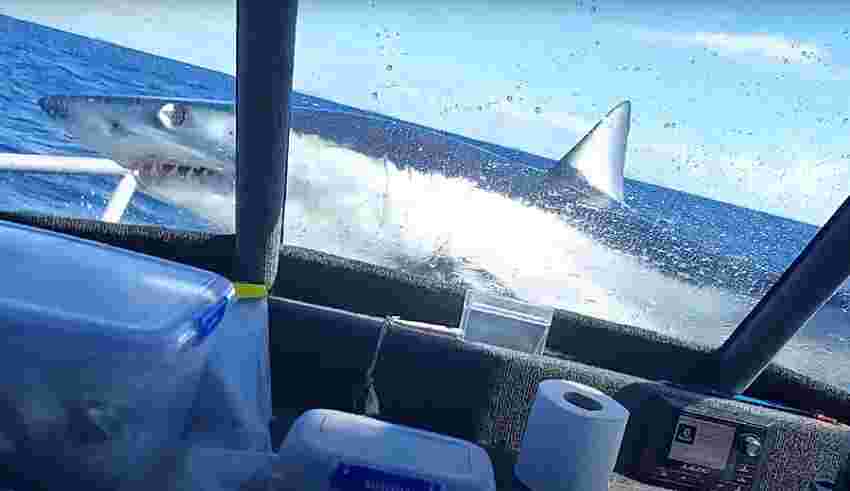 WHITIANGA, NEW ZEALAND – Giving new meaning to the phrase “jumping the shark,” New Zealand fishermen were treated to the shock of a lifetime when a massive mako shark literally leapt from the sea and landed on the deck of their boat, with the entire crazy incident captured on video which has now gone viral.

Ryan Churches, captain of Churchys Charters NZ, said that the incident took place on Saturday while he was with five clients who had chartered his vessel to do some fishing off Whitianga.

The group was fishing for kingfish, but at one point Churches said that their bait was instead taken by a shortfin mako, one of the fastest sharks in the world, capable of going as fast as 46 miles per hour.

“We were fighting it normally, and it was jumping around. I told the customers, ‘If it jumps in the boat, get out of the way,’ ” Churches said he told his clients, never expecting in a million years for it to actually happen. “It just so happened that about 30 seconds later, it jumped on the top of the boat. We were all watching the rod and the line was going out to the side of the boat, and it changed direction suddenly…it just happened to jump at the same time and we got a hell of a fright.”

The video shows one of Churches’ clients, fishing rod in-hand, wrestling with an unseen catch on the side of the boat; suddenly, to the shock of all, the huge sea predator – weighing approximately 330 pounds and measuring between 8 and 9 feet in length – leaps out of the water, crashing onto the bow of the vessel with a sickening thud.

“A mako just jumped on our boat, boys!” Churches can be heard exclaiming, who told local media that he was afraid of having his crewmembers approach the beast for fear that it would bite them with its razor-sharp teeth.

“I was thinking, ‘What the f**k do we do?’ ” he said. “We can’t go up the front to go near it because they go absolutely bonkers.”

However, the situation remedied itself shortly afterwards, as the shark was able to wiggle and flop around to the point that it was able to fall back into the sea from whence it came.

“We dropped the anchor down a little bit because it seemed to be holding it in place [on the boat],” said Churches. “He went absolutely bonkers again and pushed himself through the bow rail and slid back into the water. He got away safe.”