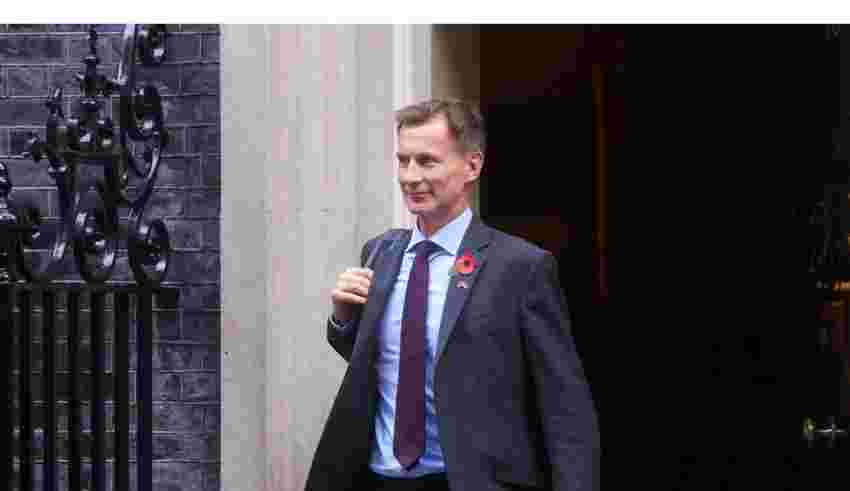 (Bloomberg) — UK Chancellor Jeremy Hunt is expected to delay much of the £55 billion ($65 billion) of savings to fill the hole in the public finances until after the next election in an attempt to protect the economy and shore up Tory support as the country heads into recession.

Hunt will unveil measures to bring the national debt under control in his Autumn Statement on Nov. 17, with around 40% of the savings coming from tax rises and 60% from spending cuts. The bulk will be delivered in the final years of the five-year forecast to protect growth now, two people familiar with the plans said.

Official figures on Friday revealed that GDP shrank for the first time since the start of 2021 in the three months to September. The Bank of England says the UK is in a recession that will, in the best case, last about a year.

“I want to make sure that this recession, if we are in one, is as short and shallow as possible,” Hunt said in an interview on Sky News on Sunday. There will be measures “grow the economy,” he added, but they are likely to be aspirations with no upfront cash.

Speaking to Channel 4, Anne Boden, chief executive of Starling Bank, warned Hunt not to tighten so hard he chokes off growth. “The thing we need to do is to make sure we don’t over-correct. That is really, really dangerous.”

En-route to the G-20 meetings in Bali, Prime Minister Rishi Sunak told reporters that putting the public finances on a sustainable trajectory was essential to “deliver on the expectations of international markets” and keep interest rates low. But he added that growth was key to being “able to cut people’s taxes over time and support public services. And you’ll hear that side of the equation from the chancellor as well.”

To fill the hole in the public finances, Hunt said everyone will have to pay more tax but, writing in the Sun on Sunday newspaper, he insisted “those with the broadest shoulders” will carry more of the load.

Freezing thresholds while wages rise would see millions of people dragged into higher tax brackets and would generate around £6 billion if extended for two more years until 2028.

“The government probably doesn’t want to fill the black hole today by taking money out of people’s pockets, so they will delay some of the savings,” said Chris Sanger, UK tax policy leader at EY and chairman of the Treasury’s Tax Professionals’ Forum.

Hunt and Sunak need to balance a number of objectives, as well as ensuring policy works in tandem with the BOE’s thinking to avoid stoking inflation. And they need to demonstrate immediate fiscal credibility to reassure markets that Britain will pay its way after the recklessness of Liz Truss’s mini-budget.

At the same time, their party needs to close the opposition Labour Party’s 20-point lead before an election, which has to be held by 2025.

“The most important thing we can do right now is to restore stability, sort out our public finances, and get debt falling,” Hunt wrote in the Sun on Sunday. “That is the only way to grip inflation and keep those interest rate rises as low as possible.”

Jamie Rush and Dan Hanson, of Bloomberg Economics, estimate that a fiscal consolidation of £30 billion would require the BOE to raise rates from 3% to 4.25% next year, where they would stay until late 2024.

A £45 billion consolidation would keep rate rises to 4% and they would fall quickly in 2024, they said.

Hunt is planning a budget consolidation of about 2% of GDP, less than a quarter of what was required after the financial crisis.

The retrenchment will be spread across the five years to soften the blow and will also be strikingly different to the 2010-2018 episode, when four fifths of the savings were made in cuts to departmental budgets.

After 12 years of Tory budget tightening, it is far harder to cut spending without damaging public services. “In 2010, it was easier to identify low-value programs you might cut,” Carl Emmerson, deputy director of the Institute for Fiscal Studies, said. “Now, after a period of hard cuts, it’s hard to see any easy savings.”

As well as the departmental savings from tighter post-election spending plans, Hunt is expected to find about £5 billion of annual savings from the aid budget and as much as £10 billion by cutting planned investment spending back to historic averages.

That would take annual spending cuts to about £35 billion.

Around £20 billion is expected to be raised from taxes. On top of action on income tax thresholds and the energy windfall tax extension, the tax-free allowance for dividend income is expected to be cut and the rate increased.

Shareholders and business owners, while bringing the tax closer to the rate that workers pay on their salaries.

Pension reliefs and capital gains tax changes are also under consideration, and planned changes to social care reform that limit lifetime costs to £86,000 may be delayed, saving up to £3 billion a year.

Local authorities may be given headroom to raise council taxes to offset some of the squeeze on their budgets.

Speaking to the BBC, Hunt signaled the government would likely extend measures to protect households from soaring gas and electricity bills, but that “there has to be some constraints” on the level of future aid once the current support plan ends in April.

In August, the government introduced an energy price cap intended to ensure that the average household will pay no more than £2,500 annually.

The cap was initially planned to last two years but later shortened. Hunt is expected to extend the scheme for another six months beyond April at a cost of £20 billion, about a third of the amount allocated for a six-month period in the current package, the Times of London reported.