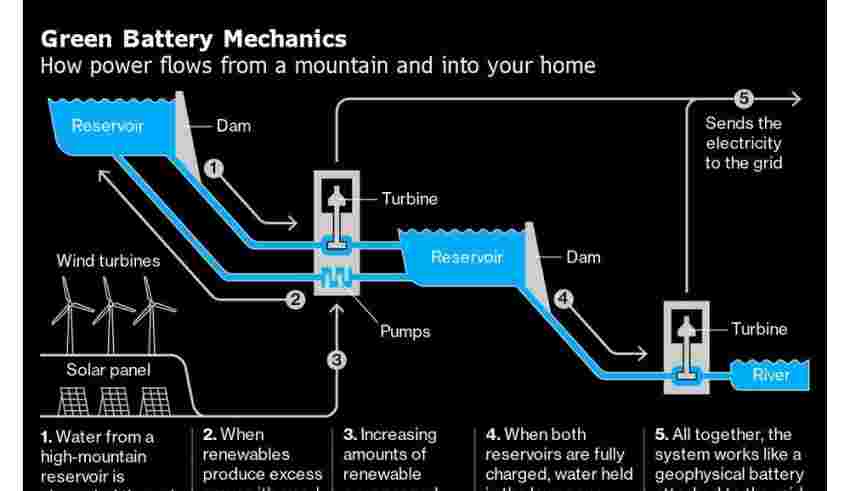 (Bloomberg) — The UK could add enough renewable energy to power a million homes by channeling water from the Scottish Highlands, yet two massive projects seeking to do that will be tangled in government red tape until at least 2024.

Drax Group Plc and SSE Plc need approval for their revenue-sharing model before building hydropower plants that would turn local lochs into giant storage batteries, able to supply the grid when consumption jumps. The stations could generate as much as 2 gigawatts of clean power to help satiate demand while the UK electrifies its economy.

The companies propose spending as much as £2 billion ($2.4 billion) combined and have submitted financing applications to the Department for Business, Energy and Industrial Strategy. The government intends to make a decision by 2024, a spokesman said. Given that construction may take six years, the extra capacity wouldn’t be online until at least 2030.

“We’ve got an energy emergency here, and we need to get cracking on these things,” said Alex Campbell, head of research and policy at the International Hydropower Association, an industry group. “This is a chance to show the UK can think seriously about these long-term, difficult challenges.”

The model at issue is called cap and floor. It guarantees a minimum annual income, even if taxpayers have to contribute, and caps the maximum that can be earned before profits are shared with the government treasury.

The mechanism gives confidence to investors by ensuring they’ll see a return for financing construction.

“It protects consumers and allows us flexibility,” said Ian Kinnaird, Drax’s Scottish assets director. “We need the support to de-risk it for our investors.”

The Selby, Britain-based company wants to double the capacity of its existing station in a dynamite-blasted cavern at Ben Cruachan, a mountain overlooking a 300-foot-deep lake. Drax will spend £500 million and take as long as six years to build Cruachan 2. The current facility opened in 1965.

SSE may spend as much as £1.5 billion on its larger Coire Glas project, 85 miles (137 kilometers) north of Cruachan. It was approved by the Scottish government after the producer took such steps as tagging local golden eagles to study the potential impact on their behavior.

Scotland has consistently called on the UK to adopt a financing mechanism that would encourage hydropower, a Scottish government spokesman said.

Given the fever in energy markets and the unpredictability of demand, it will be challenging for the government to set income parameters. Once the arrangement is in place, companies earn profits even when plants are offline or only used sporadically.

“It puts all the risk onto the taxpayer,” said Emma Woodward, a project leader at Aurora Energy Research Ltd. “It’s quite an attractive business case to investors.”

Britain’s economy is being pummeled by Russia’s decision to throttle natural gas exports. Inflation hit a 41-year high, and Chancellor of the Exchequer Jeremy Hunt said the nation is already in recession. The government is spending billions of pounds to help Britons cope with soaring energy bills.

That should be sufficient motivation to increase renewable generation and mirror the energy flexibility of hydro powerhouses Norway and Austria. The UK’s power demand is set to soar 50% by 2035, according to McKinsey and Co.

Right now, a huge amount of wind power is wasted because the grid can’t store it, so turbines may be shut down on blustery days to prevent an overload. The Scottish projects would use those gales to help pump water up to reservoirs, where it’s ready to be unleashed.