Hyundai is pitching its latest electric vehicle (EV) in a rather interesting way.

During a recent press briefing, SangYup Lee, Hyundai’s EVP and head of design, described its sleek-looking Ioniq 6 EV as a “personal mobile studio” designed for work and relaxing, stating that it offers a “cocoon-like personal space” (via The Verge).

As amusing as this sounds, the Ioniq 6’s interior is undeniably impressive (check out the photos below). The vehicle features 64 different interior colours that are capable of getting brighter as you accelerate, an expansive centre console similar to the Ioniq 5’s, two 12-inch screens, four USB-C ports, one USB-A port and slim car seats. Hopefully, the carmaker brings the mix of USB-C and USB-A to its Ioniq 5, as the EV currently only comes equipped with USB-A ports. 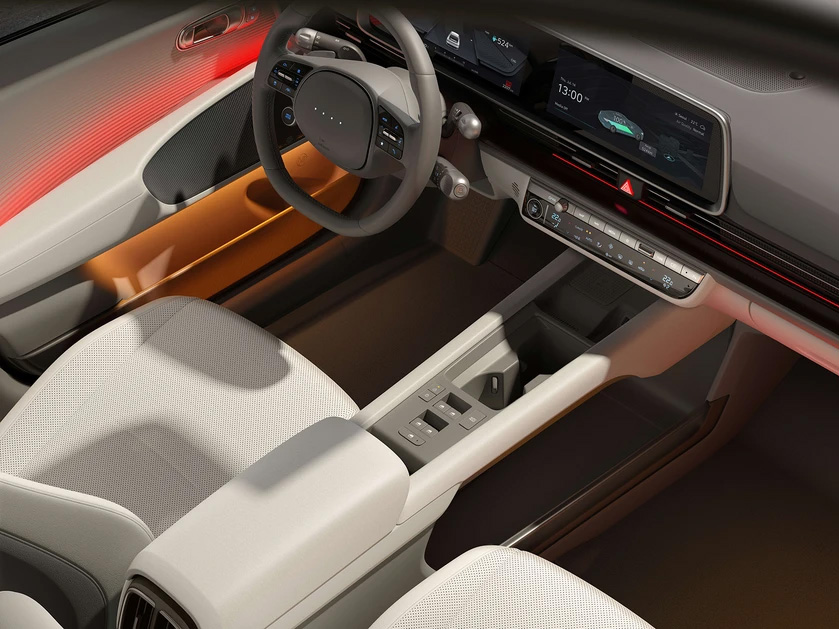 During the briefing, Hyundai emphasized that the Ioniq 6 is aimed at young professionals, while the more SUV-like Ioniq 5 targets young families that require a more spacious vehicle. It’s worth noting that both vehicles are built on the car maker’s E-GMP platform that’s capable of 400-volt and 800-volt charging. Hyundai says that the Ioniq 6 can charge from 10 percent to 80 percent in just 18 minutes when plugged into a 350-kW charger, and that it supports vehicle-to-load functionality capable of powering laptops, camping gear and more.

The EV is also the first vehicle from Hyundai to support Tesla-like over-the-air software updates. Of course, this wouldn’t be a 2022 product launch without an NFT tie-in collection and an accompanying Roblox experience (no, I’m not joking).

Hyundai says it plans to start manufacturing the Ioniq 6 in Q3 of this year in South Korea, followed by Europe. The EV won’t enter production in the U.S. until January 2023. It’s unclear how much the vehicle will cost or when it will release in Canada (the Ioniq 5 starts at $47,549 here).

This Ioniq 5 ad features a photo with a table in the back of the car that has a coffee maker and a cup on it. Wtf. pic.twitter.com/DLYod9acZQ

This isn’t the first time Hyundai has positioned its EV line-up as featuring an interior so expansive it could be used as an office. For example, back in May the car company ran several ads featuring the above image of a desk and coffee maker in the back of the Ioniq 5.

As someone who recently purchased an Ioniq 5 and is likely set for at least a 12-month delivery wait, I hope Hyundai’s manufacturing resources don’t get spread too thin as its electric vehicle lineup expands.