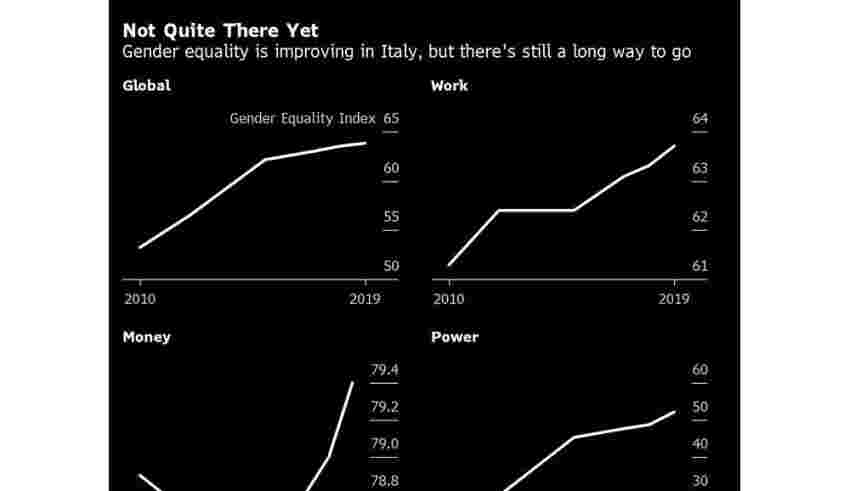 (Bloomberg) — Illycaffe Chief Executive Officer Cristina Scocchia cuts a rare figure in the Italian corporate world as a woman at the head of a famous family firm where she’s not related to anyone. And now, as she prepares to lead the company to a stock-market listing, Scocchia wants to inspire a new generation of female executives in the country.

Scocchia took over at Illy in January with a mandate to bring the coffee roaster to an initial public offering by 2026, likely in New York or Milan, she said in an interview. The family-owned company had been valued at over €1 billion ($1.1 billion) in 2019, when it initially began to seek out minority investors, people familiar with the matter said at the time.

The 48-year-old CEO acknowledges that her experience as a woman running a top company heading toward an IPO is unusual in tradition-bound Italy. But she said she hopes her story can help push more women in the country to pursue business degrees and advance in the corporate world.

“Each of us is bumping her head against a glass ceiling, and it hurts,” Scocchia said in the interview in Milan. “But the next generations will suffer less and hopefully at some point the ceiling will crack.”

Like many female executives, Scocchia can recount being asked to handle menial functions at meetings or events — tasks male colleagues would never be given.

“The men would shake hands with each other and inevitably one of them would ask me, ‘would you mind taking my coat?’” Scocchia recalls.

While that doesn’t happen at Illy, Scocchia jokes that, “if anyone does ask me to bring coffee, at least I know I’m going to serve them the highest-quality brew there is.”

Though Italy has made progress elsewhere — recently installing Giorgia Meloni as its first female prime minister — supporters of the controversial 2011 legislation that sets gender-based quotas on company boards say the law is needed in a country not always quick to embrace change.

Meloni, a far-right politician, has announced plans to boost birthrates with new policies that support women who want to stay at home longer, but she hasn’t addressed the country’s gender gap. Her government has also opposed plans to expand LGBTQ and minority rights.

The 2011 law has helped boost female representation on corporate boards at listed companies, with Italy ranking sixth out of 19 countries in last year’s European Women on Boards Gender Diversity Index. That’s behind the UK, France, and Scandinavian countries, but better than Spain, Germany and the Netherlands.

But firms with female CEOs accounted for only 2.4% of the total market value of Italy’s listed companies as of the end of 2021, regulator Consob said in a report earlier this year.

A report by the European Institute for Gender Equality also showed that 8.3% of Europe’s largest listed companies had female CEOs in the most recent period studied. Italy had none.

Scocchia, who spent the early part of her career abroad, says she didn’t initially agree with Italy’s quota law. But after a few years working in her home country, she says she’s changed her mind. Pushing for more boardroom representation is the only way to end long-entrenched attitudes that relegate women to lower positions, she said.

On her return to Italy, for example, Scocchia said she was surprised that male executives still greeted each another with the honorific “dottore,” applicable to anyone with a degree, while women with the same qualifications were often simply called “signora.”

“My academic title isn’t worth less than a male colleague’s,” she says. “Everybody should be valued as a professional, regardless of their gender.”

Yet despite her support for the measure, Scocchia warns that the quota system could be a double-edged sword in Italy.

The presence of more women on Italian boards has created expectations of a balancing, “gentler touch” at corporations, she said, setting men up to retain the more aggressive, crisis management-oriented roles.

“These stereotypes are dangerous,” Scocchia says. “If you start off believing that men are the ones equipped to handle a crisis, and then a pandemic, a war, a surge in inflation comes along, who will be chosen to lead?”

For her own part, Scocchia’s background at a number of global firms allowed her to stand out as a candidate to run Illy, known for its high-end Italian-style coffee sold in trademark red-and-silver cans.

Scocchia began her career at US consumer giant Procter & Gamble Co. and later moved to French cosmetics leader L’Oreal SA. By 2017 she was CEO of Italian make-up firm Kiko, where she led the company’s expansion into the Middle East and Asia. She’s been on Illy’s board since 2019 and also sits on the boards at eyewear giant EssilorLuxottica SA and Italian shipbuilder Fincantieri SpA.

As CEO, Scocchia says she’s had strong support from the Illy family and the company’s other shareholder, US private equity firm Rhone Capital LLC, as she builds her team with an eye toward the IPO.

Illycaffe has its roots in the eastern crossroads city of Trieste, where founder Francesco Illy —- the grandfather of current chairman Andrea Illy — is credited with creating the precursor to the modern espresso machine in the 1930s.

Illy also invented a pressurized packaging system to keep coffee fresh, allowing the company to expand sales beyond Trieste and eventually worldwide. The Illy family fully owned the firm until the recent sale of a 20% stake to Rhone for a reported price of around €200 million.

In her plan, which runs through 2026, the CEO is targeting doubling revenue in the US and taking advantage of changing tastes in tea-drinking China.

Yet even with Illy expecting double-digit revenue growth for the year — after posting about €500 million in sales in 2021 — Scocchia warns of a margin contraction, as prices rise for everything from coffee beans, to logistics to energy for running plants.

While the company has thus far held off on passing higher costs on to customers, that policy “won’t last forever,” Scocchia said.

Overall profit is nonetheless expected to grow compared with last year, partly due to the focus on operating efficiency, she said.

The IPO project is “moving ahead so we can hit the ground running,” Scocchia said, adding that the company won’t force a listing at the wrong moment. “So far, we haven’t had any delays, but the exact timing will also depend on the macroeconomic context.”

—With assistance from Antonio Vanuzzo, Marco Bertacche and Chiara Albanese.