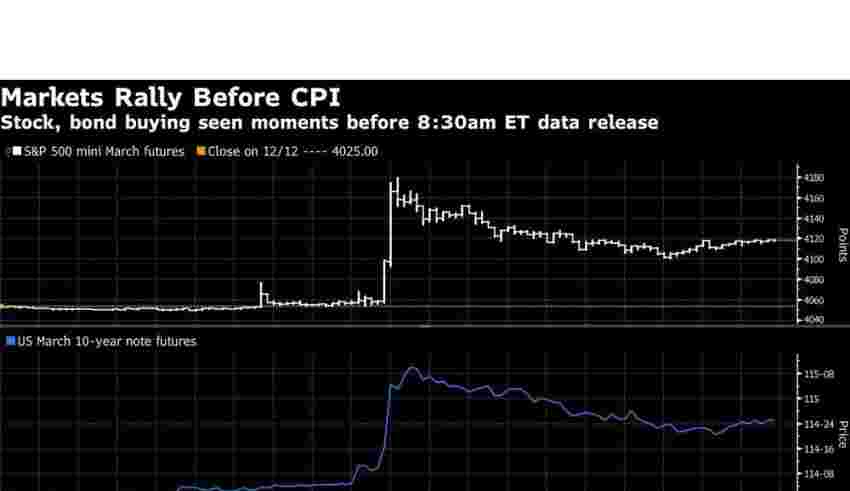 (Bloomberg) — Karine Jean-Pierre, the press secretary for President Joe Biden, quickly brushed off the question when it came in toward the end of her daily press conference Tuesday. No, she said, there was no chance that anyone in the White House leaked the November inflation report before its 8:30 a.m. publication. Too much fuss was being made, as she saw it, over what were just “minor market movements.”

But there was nothing minor about the rally that took hold in the seconds before the better-than-expected inflation number hit the Labor Department’s website.

Stock futures suddenly spiked more than 1%. Trading in Treasury futures surged, pushing benchmark yields lower by about 4 basis points. Those are major moves in such a short period of time — bigger than full-session swings on some days. And they should get scrutinized by regulators, long-time market observers say, even if a leak is only one of several possible explanations for why traders suddenly started buying right before the report was published.

Significant “trading activity ahead of market-changing news is suspicious and typically worthy of regulatory agencies making appropriate inquiries,” said Jerome Selvers, chair of the securities regulatory enforcement & litigation practice at Pashman Stein Walder Hayden. “This is unusual, especially given the reduction in inflation that was reported, which was well in excess of what markets anticipated,” he said. “Someone will likely look into it, whether it’s innocent or not.”

Of course, if and when such an investigation occurs remains to be seen. For its part, the US Bureau of Labor Statistics said it’s unaware of any early release of its data.

Still, over a 60-second span before the data went out, over 13,000 March 10-year futures traded hands (during a period when activity is usually nonexistent) as the contract was bid up. Stocks and bonds rallied further immediately after publication of the data, as investors speculated that cooling inflation meant the Federal Reserve would pause its tightening cycle early next year.

BLS spokesperson Cody Parkinson said by email that while the agency is not aware of any early release, some government officials do routinely receive the data before publication under federal guidelines.

Excluding food and energy, the CPI rose 0.2% in November and was up 6% from a year earlier. The median estimate in a Bloomberg survey of economists called for a 0.3% monthly increase.

—With assistance from Edward Bolingbroke and Reade Pickert.