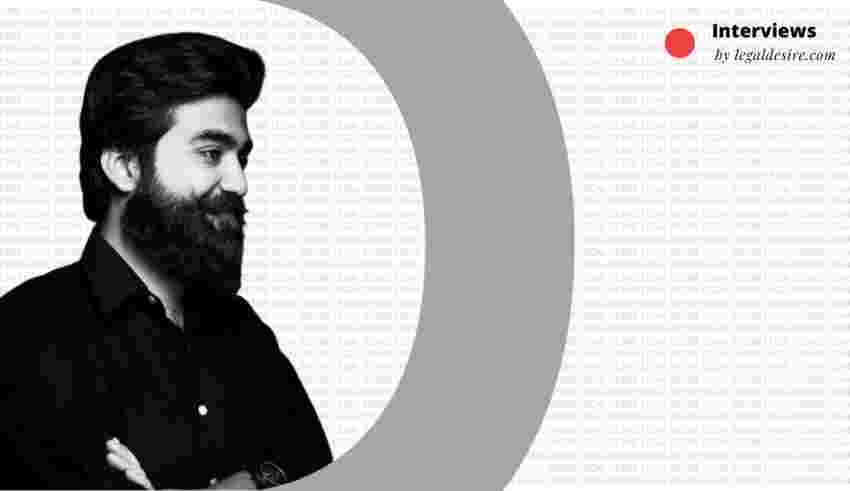 Mr. Navodaya Singh Rajpurohit is Legal Partner at Coinque Consulting, and also the Founder of Pravadati Legal, where he leads the Web 3.0, Blockchain/ Cryptocurrency, and Dispute Resolution teams, respectively. He started his career in 2014, graduating from Christ University, and went ahead, learning new jurisprudence and laws like blockchain, AI, cryptocurrency, etc. Mr. Rajpurohit talked about Metaverse and the plausible legal challenges around Metaverse with Apoorva Mehta, Executive Manager at Legal Desire.

Question: Can you tell a little about yourself?

Hi, I am Navodaya Singh Rajpurohit. I am a lawyer with a varied experience in Litigation, Arbitration, Corporate Advisory, Legal Compliance, and Regulatory practice.

I have been fortunate enough to have gained experience in different fields of law and become a part of the new jurisprudence developed around such new laws like competition and antitrust laws, insolvency and bankruptcy law, blockchain and cryptocurrency law. So now, when I look back, I believe I was always at the right place at the right time to gain different kinds of skill sets to reach where I am today.

Question: What do you think is the future of Cryptocurrency in India?

With everything that has been happening in the cryptocurrency market in the last few months, it would be too early to comment on the future of cryptocurrency in India. However, one thing we can be certain of is that, at this stage, it would be a cumbersome task for any government to ban cryptocurrency. As Prof. Lant Pritchett puts it, big ideas go through four distinct stages before achieving social acceptance: silly, controversial, progressive, and obvious. We are currently transitioning between controversial and progressive, where governments worldwide are working on regulatory sandboxes and trying to frame a robust regulation for the cryptocurrency industry.

If I have to give a one-liner about this question, I would say that cryptocurrency’s future is bright in India. In the coming years, we will see a well-regulated space with more consumer and investor protection.

Question: What legal challenges can be faced in Metaverse?

In order to understand the legal challenges that are likely to be faced in Metaverse, it is crucial to understand what constitutes Metaverse. Though there is no legal definition of metaverse yet, it can be understood as any virtual world that provides you with an experience beyond your reality. Metaverse has been in existence for a very long time, and in its purest sense, even a good novel can also be considered to be a metaverse. However, from the standpoint of today’s world, it would essentially include a virtual experience, which would involve the use of virtual reality, augmented reality, mixed reality, and hyperreality.

Question: What do you think should be the course of action for such challenges?

It is hard to say that the challenges will be addressed soon; however, it is only possible to achieve uniformity with the involvement of all the stakeholders, viz Government, Developers, and Consumers. Some of the legal challenges mentioned above are being tackled currently and have been addressed by the different stakeholders, e.g., Meta included a personal boundary feature after sexual harassment claims were raised, and AML compliances as per FATF have been made mandatory for all the companies dealing in cryptocurrency. GDPR has proved to be an essential tool for the standardization of data protection laws. It can be said that things are moving in the right direction but at their own pace. Since blockchain technology is also dynamic in nature and new use cases are being developed almost every day, we would have to accept the fact that things will take some time to settle.

Question: Do you think with Metaverse and AI coming in, jobs are in jeopardy?

While it is tough to answer this question with certainty, the fact that it might, cannot be ignored. In all likelihood, some of the jobs will become redundant because of AI and machine learning. On the other hand, I don’t see jobs will be in jeopardy because of metaverse, in fact, it will create more jobs in all the fields it will touch upon. In the case of AI and machine learning, we can already see the change in the customer service industry, data entry and bookkeeping, taxi services, and market research. This has always been the case with new and emerging technology, and we all adapt to the circumstances. I am sure that with AI/ machine learning, there will be different kinds of jobs that will be created, such as data scientists, machine learning engineers, robotics engineers, AI maintenance workers, etc.

Question: What exactly is Web 3.0?

To put it in simplest terms, Web3.0 or Web3 is a vision of a new stage of the internet that is decentralized, permissionless, trustless and gives ownership to the users or creators. Web3 envisions democratizing the internet and bringing the power back to the users removing all the issues with the centralization of information. Cryptocurrency, decentralized finance (DeFi), decentralized autonomous organizations (DAO), Non-fungible tokens (NFT), Smart contracts, and Blockchain Technology (Distributed Ledger Technology or DLT) are at the core of Web3 vision.

Every aspect of Web3 is trying to solve some or the other problem with the centralization of information or data, e.g., DeFi is trying to resolve the issues with the financial sector, which requires the involvement of centralized authorities keeping your personal financial data and has the power to decide if you can make certain transactions or not based on the information you had provided. We have seen how many banks have collapsed, and because of corruption, loans given to elites without collaterals or abuse of some loophole in the banking system. Similarly, NFTs are trying to solve the problem with ownership of data by providing the ownership of art or any creation to its creators, which is also known as the creator economy.

Question: How can the legal industry adopt Web 3.0 for its benefits?

The legal industry can leverage blockchain technology in various forms, some of the instances where web3 or DLT is already being used are smart contracts and NFTs. Smart contracts have changed how small transactions are undertaken. It has eliminated the use of third parties for overseeing the performance of contracts. What has been agreed upon through a smart contract will execute if all the conditions are met. Another instance where web3 has helped the legal industry is in the case of LCX AG, vs. John Does, where the whereabouts of the hacker were not known, and the Supreme Court of the State of New York allowed the serving of court orders and notice through airdrop in his wallet which also included a mechanism to track when a person clicks on the service hyperlink.

Question: What will be the future of life with Metaverse growing?

Metaverse is set to change reality as we perceive it today; with the new technologies developing every day for metaverse experience, we will probably be more engaged with the technology in our everyday life. The most significant step towards the metaverse becoming a reality is the launch of the 5G network, which is essential for metaverse to function effectively. Almost all the existing industries are venturing into metaverse in some or the other form. Industries such as gaming, healthcare, medical devices, education, automobile, movie, and fashion are some of the early adopters of metaverse and related technologies.

According to various market predictions, the AR/VR market is set to reach a 250 Billion dollar industry by 2028, and the estimated number of AR/VR users will reach 100 million by 2027, according to market research. Another market report suggests that at least 25% of the population would spend at least one hour in metaverse for various reasons including but not limited to work, shopping, gaming, social interaction, or just for entertainment. I believe metaverse will not be accepted until the AR/VR devices break the barrier of low cost, easy to use, and effective user experience.

Question: Do you think our current laws are sufficient for Metaverse? If not, what amends do you suggest?

Every law student has been taught one thing about law, and that is “Law is dynamic in nature” with the change in society, circumstances, technology, and development, the law should evolve. If we start to interpret current laws on various aspects of metaverse, blockchain, and cryptocurrency, we will find something or the other which will be applicable on it. However, to effectively enforce the laws on the new dynamics of technology, it is imperative to look for new avenues and either bring amendments to the existing laws or draft comprehensive laws governing metaverse and related technology.

As mentioned earlier, governments worldwide are working on developing laws to govern various aspects of DLT, metaverse, NFT, DeFi, DAO, and cryptocurrency. DLT has brought a revolutionary change in every part of business, and this would require amendments from basic contract laws to complex financial and information technology laws.

The first thing that needs to be done is to get a global consensus on definitions of cryptocurrency and different kinds of tokens (security, utility, NFT, DAO tokens, etc.). Blockchain technology aligned with cryptocurrency has made all businesses global, and hence a global consensus is not only an option but a necessity to arrive at international standards for regulating or governing business activities in the Web3 industry.

Question: If not law, what would have been your career choice?

This reminds me of a famous quote by Roy T. Bennett in his book The Light in the Heart: Inspirational Thoughts for Living Your Best Life.

“Beliefs are choices. First you choose your beliefs. Then your beliefs affect your choices.”

If not law, I believe I would have either chosen Indian Air Force or become a full time poet/writer.