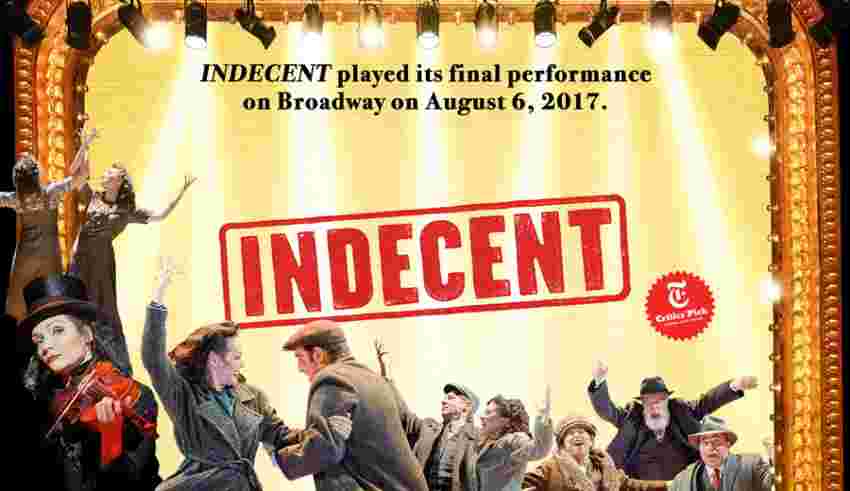 PORTSMOUTH, OH – Remember your high school play. “Memories light the corners of my mind. Misty water-colored memories.” Listen to Barbara Streisand’s “The Way We Were” on YouTube. I vaguely recall my character, but the part was an elderly lady – so I wore a gray wig and a hairnet. Grandparents, parents, siblings, aunts, uncles, cousins, neighbors, and anyone connected to the school attended.

I agree, because I read the script to the play titled “Indecent.”

Moreover, younger siblings have no business being in the audience of “Indecent.” And it may shock poor grandma as well.

The National Coalition Against Censorship, PEN America, and the Dramatists Legal Defense Fund, organizations “expressed deep concern over the cancellation” of the student production of the play.

Author of the play Paula Vogel pulled her car over and cried when she heard the cancelation news.

Interview excerpts with Paula Vogel at PEN by Lisa Tolen.

Tolen: Were you surprised when you heard your play had been shut down for “adult sexual themes?”

Vogel: Yes, I was. I’m not in the business of politics, but whatever that board says in terms of statements that they’ve released about why they’re doing this; they’re putting sheep’s clothing over a wolf. And the wolf is Governor DeSantis. So the school board is saying, oh, this has nothing to do with the Don’t Say Gay bill. Right. Can I sell you a bridge?

So, Vogel throws a hissy fit and plays the blame-shame game and calls Gov. DeSantis a “wolf.” And of course, she goes straight to LGBTQ radical activist rhetoric of ‘Don’t Say Gay’ – a phrase not found anywhere in the legislation.

What does the Parental Rights in Education really say?

Classroom instruction by school personnel or third parties on sexual orientation or gender identity may not occur in kindergarten through grade 3 or in a manner that is not age appropriate or developmentally appropriate for students in accordance with state standards.

The legislation affirms the rights of parents to be involved in any gender identity intervention between the school and their child. It bans schools from hiding information about mental health counseling and supports monitoring from parents, except in extreme cases that would “result in abuse, abandonment, or neglect.”

Rational, reasonable and sensible parents and other adults have no problem with the wording of the this legislation because they want the rights of parents to be protected along with their children.

Vogel told PEN America, “The faculty and the administration have principally been silenced. I am fearing for their jobs. … censorship of the arts is always the first step towards totalitarianism, and ultimately, towards genocide.”

Okay folks, there’s the cancel culture virtue signaling by Vogel. Hmmm. She is “fearing for their job.” Uh-huh. And definitely does not want anyone fired for censorship. Uh-huh. And a canceled play with lesbian characters is the beginning of a Marxist government takeover and “genocide.” I’m assuming Vogel is referring to genocide of LBGTQ individuals. This is me shaking my head back and forth – and sighing. Her sexual orientation victimization card has just been played.

“The school board is endangering their future if they shut down plays, and endangering their safety,” Vogel said, as noted in Forward, a Jewish publication. “There is a real rise of antisemitism in Jacksonville…Hate speech and homophobia is the cloak.”

So, is Vogel accusing the school board members of “antisemitism” and “hate speech” and “homophobia” because the play is inappropriate for younger high school students and children that may be in the audience to watch the play.

Anything else Vogel can rant about? Well, yes there is…

“I am now learning about hate groups such as Moms [for] Liberty and the Goyim Defense League,” Vogel continued. “And they are seeking out these student cast members and rocks are being dropped in their driveway to intimidate them and strike fear.”

So, Vogel compares Moms for Liberty with an antisemitic hate group. Really? And perpetrators are supposedly stalking the students at their homes with pockets full of rocks. Uh-huh. And who is the fearmonger overreacting and spewing out accusations?

“The canary in the coal mine is, as it was in the ’20s, with the rise of fascism — the promoting of genocide against the lives of those who are lesbian-positive and Jewish-positive,” Vogel said.

So, the school board is giving into fascism. Uh-huh. And lesbians and Jews are being targeted. Uh-huh.

Any accusations left? Is Vogel’s meltdown over?

In a nutshell: Indecent is a 2015 play by Paula Vogel. It recounts the controversy surrounding the play God of Vengeance by Sholem Asch, which was produced on Broadway in 1923 – the producer and cast were arrested and convicted on the grounds of obscenity, but it was later overturned.

TITLE: in Yiddish Sholem Asch, a twenty-three-year-old playwright, waits as his wife reads the last page of The God of Vengeance.

MADJE. It’s interesting to hear your words the night you seduced me…in the mouth of a prostitute.

ASCH. I feel like a prostitute every time I have to pander to Mr. Peretz to get a reading in his salon.

MADJE. Our play will catch fire in Berlin! All the German intelligentsia can talk about right now is Dr. Freud! It’s the twentieth century! We are all attracted to both sexes. I promise I’ll understand if you get attracted to a man—

MADJE. But I’ll kill you if it’s another woman.

ASCH. I promise you I’ll understand if you get attracted to a woman—as long as I can watch.

MADJE. My God, I am now married to a Playwright! You’re my warrior! My suffragette!

MADJE. “Teach me. Take me. I want to taste you.” Madje dives beneath the covers.

The Play: “God of Vengeance”

“Written in 1907 and staged around the world to critical acclaim and—sometimes—controversy, Sholem Asch’s Yidish-language drama Der got fun nekome (The God of Vengeance) was enormously provocative in its time, and remains one of the most significant Jewish plays of the twentieth century.” Why? Two lesbians fall in love and kiss in the rain – and society was not ready.

The 1907 Yiddish play is about the love between a female prostitute and the daughter of the brothel’s owner.

The Plot for “The God of Vengeance”

Yankl Tshaptshovitsh and his wife Soreh run a brothel in the basement of their home in a typical Polish Jewish town. It’s given them a good income. But the taint of the whorehouse has thwarted their dream of finding a respectable match for their teenage daughter Rivkele. Finally, Yankl’s money has talked and the matchmaker has found a pious young groom. Yankl commissions a Torah scroll and puts it in his daughter’s room to watch over her. It’s time to close the brothel down.

But will God forgive his sins and allow his daughter to live a decent life? The answer soon becomes clear as we see Rivkele sneaking downstairs into the arms of one of the prostitutes, unleashing a chain of events that brings Yankl’s dream crashing down. Sex, prostitution, lesbianism, and the desecration of a Torah scroll grabbed the headlines.

But Got fun nekome is also about social and religious hypocrisy, man’s relationship with God, and parents’ dreams for their children. Plus some universally familiar types – a rebellious teenager, a domineering father, and a practical, resourceful mother.

Let’s Talk about Brothels: “The God of Vengeance” featured women exchanging sex for money in the basement of a private home. What was the plight of these marginalized and abused women? That’s the bigger issue both past and future.

“Prostitution and Trafficking in Nevada: Making the Connections,” is 2007 book by Melissa Farley.

“During a two-year investigation, the author, Melissa Farley, visited eight legal brothels in Nevada, interviewing 45 women and a number of brothel owners. Far from enjoying better conditions than those who work illegally, the prostitutes she spoke to are often subject to slave-like conditions.”

The effect of all this on the women in the brothels is “negative and profound,” according to Farley. “Many were suffering what I’d describe as the traumatic effects of ongoing sexual assaults, and those that had been in the brothels for some time were institutionalized. That is, they were passive, timid, compliant, and deeply resigned.”

Vogel needs to know that the cancelation of the play is nothing personal against her own sexual orientation. As she was born in 1951, I’m sure growing up as a lesbian in that era was traumatic – and I’m sorry she was triggered. Vogel is a talented, smart, caring person with accolades (Pulitzer Prize-winning playwright) a mile long from what I gleaned on the internet. In 2017, Vogel was honored for LGBT activism.

However, Vogel needs to respect the school’s decision and apologize to the district personnel, Gov. DeSantis and Moms for Liberty for her hurtful words. And move on.

The students in the play have used the First Amendment and spoken out in peaceful protest. I admire and respect that; however they need to respect the decision of the school board. And move on to the next play.

Albeit, the priority needs to be defending and protecting children from non-age appropriate material in the school systems – whether that involves heterosexual, homosexual, bisexual, or transsexual material. Making age-appropriate decisions for children isn’t censorship, bigotry, hatred, homophobic, fascist, antisemetic and so on and so on. It’s what responsible adults do.

As usual, do your own research, converse with others, use critical thinking skills and arrive at your own conclusions.