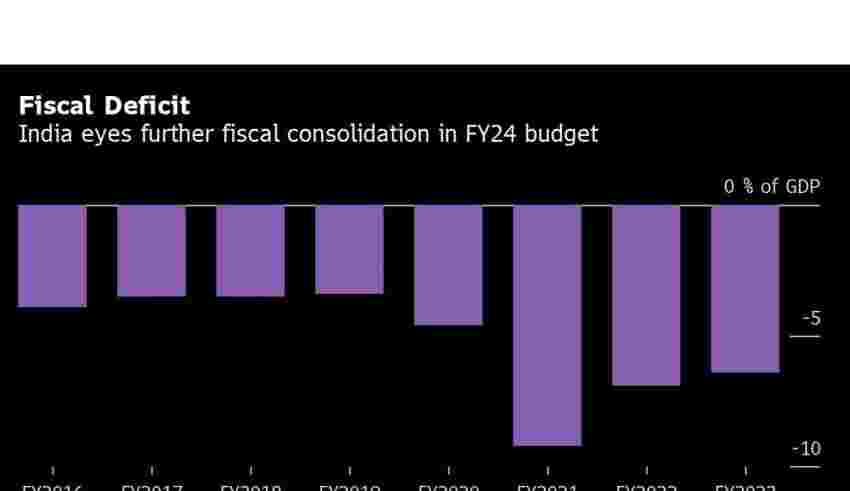 (Bloomberg) — India wants to narrow its budget deficit by at least 50 basis points, according to people familiar with the matter, as authorities balance global investor scrutiny with the need for higher spending as the nation enters an election year.

Finance Minister Nirmala Sitharaman will seek to shrink the shortfall to less than 6% of gross domestic product in the year starting April 1, the people said, asking not to be identified as the deliberations are private. Her presentation due Feb. 1 will be the final full-year budget before citizens elect their new prime minister in the summer of 2024, a time when Indian governments typically loosen the purse strings.

What complicates matters for Sitharaman is that her food and energy bills are inflated by the war in Ukraine and given India runs a current-account deficit as well, the rupee has been weakening to successive record lows. Subsidies on food, fertilizer and fuel will cost at least $67 billion in the year ending March 2023 — or 2.1% of GDP —  against the budget estimate of 3.2 trillion rupees ($39.2 billion), Bloomberg News had reported earlier.

The Reserve Bank of India has already lost $100 billion from its reserves defending the currency and, given the strength of the dollar, it’s perhaps wiser to allow reasonable amounts of depreciation and preserve stockpiles of the greenback, the people said.

Authorities are turning cautious because India needs foreign inflows to bridge the deficits. The people said that while authorities won’t change domestic policies to facilitate India’s inclusion in global bond indexes, policy makers want to ensure funds see India as an attractive destination and maintaining fiscal discipline is a priority for the government.

India Unwilling to Bend for Index Inclusion to Bring in Billions

They added the subsidy bill next year could ease as commodity prices are expected to cool and the government intends to ramp up domestic production of fertilizers. A free food grains program that fed about 800 million people is also likely to come to an end, the people said.

Discussions are ongoing and the final numbers will be decided closer to the budget presentation. A spokesperson for the finance ministry declined to comment.

India has budgeted a deficit of 6.4% of GDP in the current year, significantly down from 9.2% during the first year of the pandemic. A longstanding plan aims to shrink the shortfall to below 4.5% of GDP by 2025-26.

The finance ministry is confident of meeting this year’s target and will stick to the glide path, the people said.