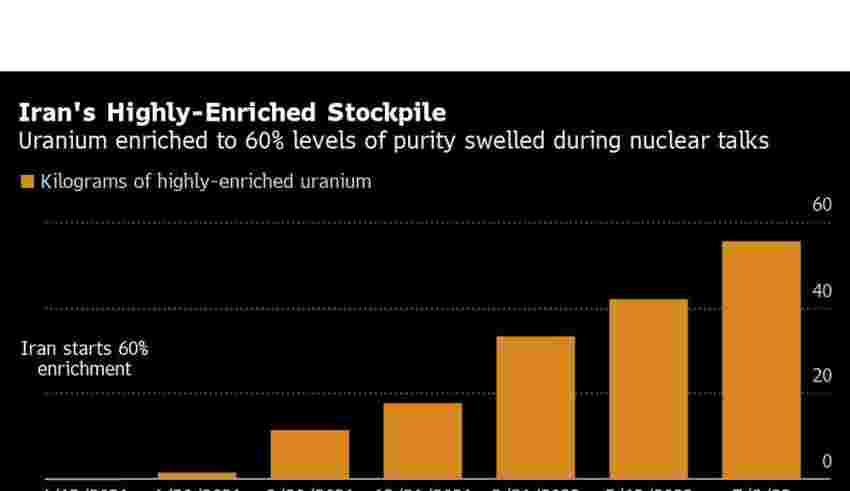 Iran’s rapidly expanding nuclear program and restrictions on international monitoring are hurtling toward another dangerous crisis while raising doubts over the Islamic Republic’s claim its atomic work is peaceful, western diplomats said.

The International Atomic Energy Agency’s board of governors is weighing whether to formally censure Iran for a second time this year at their quarterly meeting convened this week in Vienna. Iran continues stonewalling an IAEA probe into uranium traces sampled at three undeclared sites while its stockpile of fuel — enriched just below weapons grade — rises to record highs.

The US and its European allies sponsored a resolution of censure at this week’s board, demanding that Iran urgently cooperate with the IAEA. The motion is likely to pass even without the support of China and Russia, which stood against the last censure in June.

Iran’s foreign ministry has criticized the comments and said efforts to censure Tehran were “destructive” and would trigger a “decisive and effective” response from the Islamic Republic.

The remarks follow a US intelligence assessment that blamed Iran for a Tuesday drone attack off the Omani coast, which targeted an oil tanker linked to an Israeli billionaire.

Iran also faces mounting criticism for its violent crackdown on anti-government protests and for supplying Russia with military drones for use in its war on Ukraine. The US said earlier this month it’s concerned Moscow may also acquire surface-to-surface missiles form Tehran.

“Iran argues it is unfairly targeted by others,” said US deputy envoy Louis Bono in a statement. “In reality, it is Iran, through its own alarming actions, that singles itself out.”

The nuclear deal between Iran and world powers unraveled after then-President Donald Trump withdrew the US in 2018 and reimposed sanctions. In response, Iranian officials expanded the country’s nuclear program. Tehran denies it’s seeking to build atomic warheads but concerns it might develop the technology to do so propelled years of diplomacy that led to the deal with world powers.

IAEA Director General Rafael Mariano Grossi said Wednesday that even if the nuclear deal, known as the Joint Comprehensive Plan of Action, can be eventually revived, his inspectors may never be able to replicate data lost since Iran shut down more than two dozen monitoring cameras in June.

“Any future baseline for such JCPOA verification and monitoring activities would take a considerable time to establish and would have a degree of uncertainty,” he said. “The longer the current situation persists the greater such uncertainty becomes.”